Customer loyalty program startup Thanx launched today with both a Visa and MasterCard partnership and $4.7 million in Series A funding from Sequoia Capital. An earlier seed round from SoftTech VC of $1.3 million brings the total funding raised to $6 million.

Thanx might have its work cut out for it, though. Most people don’t want to take the time fill out a form, carry around an extra rewards card, scan their phone like they do with Belly or type in their email or phone number every time they’re at checkout. And despite the 2.65 billion loyalty memberships in the U.S., about 60 percent go inactive within the first year and 30 percent of rewards go unredeemed, according to Colloquy. 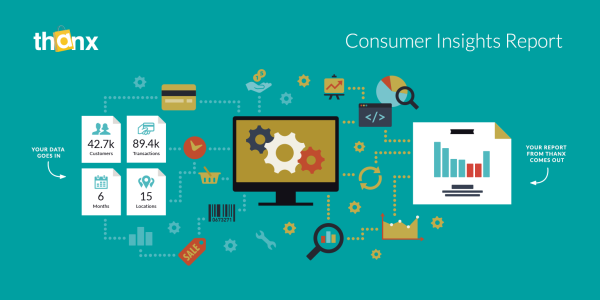 But Thanx is attempting to give you rewards without you having to do anything other than shop. Larger merchants like Sephora or Anthropologie do something similar to this. You do have to opt in to their rewards programs and give an email at the cash register to redeem, but it’s much easier than fumbling for a card. You also get the reward instantly. No saving coupons or bringing in old receipts to redeem the value. But they’re big enough to have the resources to make their own, internal system.

Thanx is making a plug-and-play rewards platform for the smaller merchant the same way Square did with the cash register. Square already has a customer rewards system in place for its merchants to use. But this is more like a traditional point-of-sale system many retail businesses already use. The consumer still has to identify herself with her email address every time she makes a purchase and there’s no credit card integration. If the customer forgets to enter an email address or hasn’t hooked that up with Square, they forgo the reward.

“Loyalty programs that require a customer to take action each time they make a transaction or engage with your brand create a lot of consumer friction,” explains Thanx founder Zach Goldstein.

Thanx isn’t tied to a POS and works regardless of what system is in place, simply by using your Visa or MasterCard. Goldstein says this means it can actually work with Square merchants without them needing to change their system. 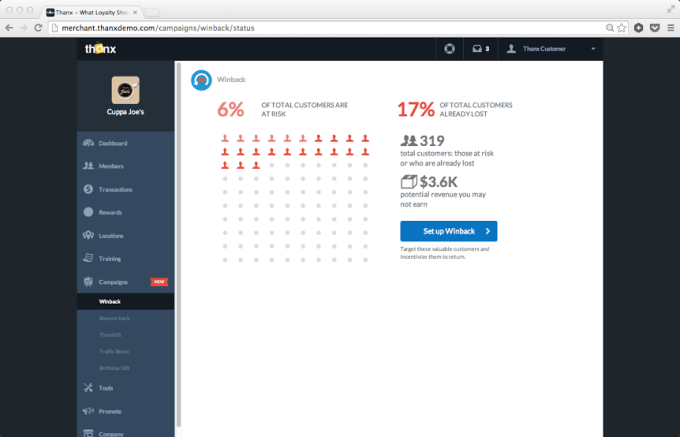 The two largest “loyalty” markets in the U.S. are credit cards and travel/hospitality (airlines, hotels, car rental agencies etc.). Thanx simply pushes cash directly back to your credit card without you having to remember to do something. It also sends push notifications alerting you to the availability of a discount or reward from the merchant.

At this point you may be thinking about privacy concerns and just how much credit card and other information Thanx might have, should you decide to use it. According to Goldstein they don’t even touch the credit card number. That’s all handled by your credit card company. Thanx does, however, track consumer information using what it calls the “Winback Campaigns” system in order to market to them. 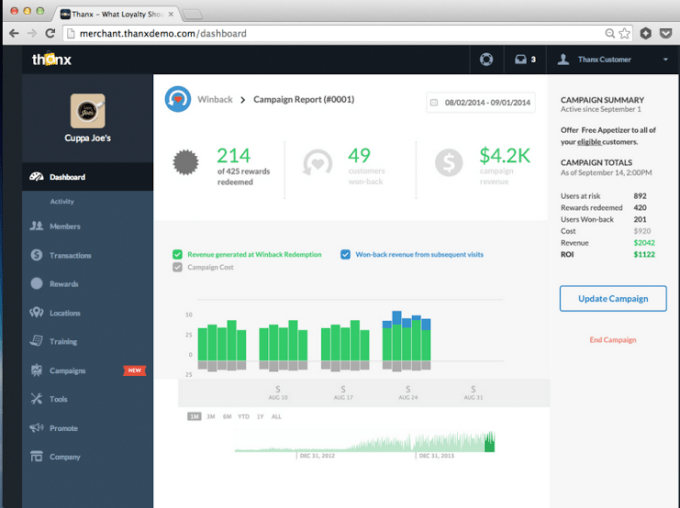 Merchants are able to pinpoint their most loyal customers, as well as customers they might be on the edge of losing, and push rewards or discounts to customers accordingly.

Thanx also integrates with Apple Pay. Right now this makes it the only rewards provider working with the new cardless payment system from Apple. The startup relied on a number of data partnerships with payment card processors such as First Data to test the concept before adding Apple Pay and the two credit card companies. The partnerships with Visa and MasterCard now make it possible for all U.S. merchants to use the backend marketing campaign system.

Goldstein plans to use the new cash to create more products in the marketing campaign suite and to build out the engineering and sales departments for his San Francisco-based team.