Google has a new Nexus tablet, and it’s made by HTC. The Taiwanese device maker has spent some time away from building tablets, so this return is significant not just because it’s a Nexus, one of Google’s stable of devices blessed with stock Android (and the first to ship with Android 5.0 Lollipop), but also because it’s the first slate in years from the maker of what is very likely the best-designed Android smartphone around in the HTC One M8. HTC does an admirable job of playing a tune familiar to Nexus fans with this tablet and offers one of the best-performing Android devices currently available. But fans of the M8’s unique design might feel a little deflated by the Nexus 9’s build quality.

The Nexus 9’s design will be familiar to any fans of recent Nexus devices, mainly because it’s almost exactly an inflated version of an existing device – the LG-made Nexus 5. HTC’s tablet has the same rubberized matte back and the same bezel that’s angled slightly around the edge of the entire device. That edge is composed of brushed metal, however, in a color that matches the back panel. This is a slight premium edge it has on the design of the Nexus 5. Otherwise, though, it’s as if the Nexus 5 ingested one of Mario’s Magic Mushrooms, which isn’t necessarily a bad thing.

The Nexus 5 remains one of the most lastingly successful designs of a smartphone to date, even if it isn’t the most premium build available in a mobile device. The back is grippy, yet also manages to resist picking up too much dust and grit, and the sloped edges make it easier to grip one-handed. The materials used make it both light and durable, and while I’d call it mostly unremarkable in terms of visual appeal, its humble looks are also part of its charm.

The Nexus 9 has a similar kind of appeal. As you might expect from hardware with the Nexus ‘stock’ role, the Nexus 9 is neither the flashiest device in the world, nor the slimmest nor the lightest, but it’s perfectly adequate in all those categories. It’s not, for instance, an iPad Air 2 when it comes to its thickness, which in fact doesn’t even beat the original iPad Air, but it’s slim enough to satisfy most. Its weight actually manages to beat both the iPad Air and its successor by a few grams, however, likely due to the use of plastic instead of metal for the bulk of the back chassis construction.

Metal made the HTC One M8 a stand-out in the Android device design category, but the plastic here helps make the back of the Nexus 9 more grippy. The ability to grip the larger slate with a good deal of confidence is very useful given its dimensions, but there is a noticeable gap between the outside of the back cover and whatever’s underneath (likely a battery unit), which can result in a tactile, subtle clicky feeling when you’re shifting your grip. It’s not an issue that’s serious enough to detract from my enjoyment in using the tablet, but it is disappointing in a device from a company that built the beautifully engineered One M8.

The Nexus 9 offers a lot of features that set it apart from other Android tablets, including the front-facing HTC speakers, which work great for watching movies and listening to music. Headphones will still serve you better, but if you’re snuggling up with a significant other to watch and the tablet is your only means of viewing and listening, you won’t be disappointed.

Since it’s running stock Android, the Nexus 9 also gets a lot of cool features that other OEMs might not offer on their own devices. For instance, you can allow the tablet to be always listening for an “Ok Google” command to wake the device and launch a search, and specify whether it should do this on all screens at all times, even when not connected to power and when the screen is locked. Google has tweaked this feature slightly, too, adding a voice-training element so that it should respond only to you, instead of to anyone who happens to say it (including, for instance, myself on a podcast you might be listening to).

The Nexus 9 also offers double-tap to wake, which means you can touch the screen anywhere twice in rapid succession to activate the screen. This is actually one of the features of the HTC One M8 that I miss most when using other devices, and it’s great to see it offered as part of this hardware. That’s a feature specific to this tablet, too, which isn’t coming to the Nexus 7 or 5 via software update. It’s a small thing, but when you’re using a device on and off throughout the day, it adds up to a massive convenience benefit. 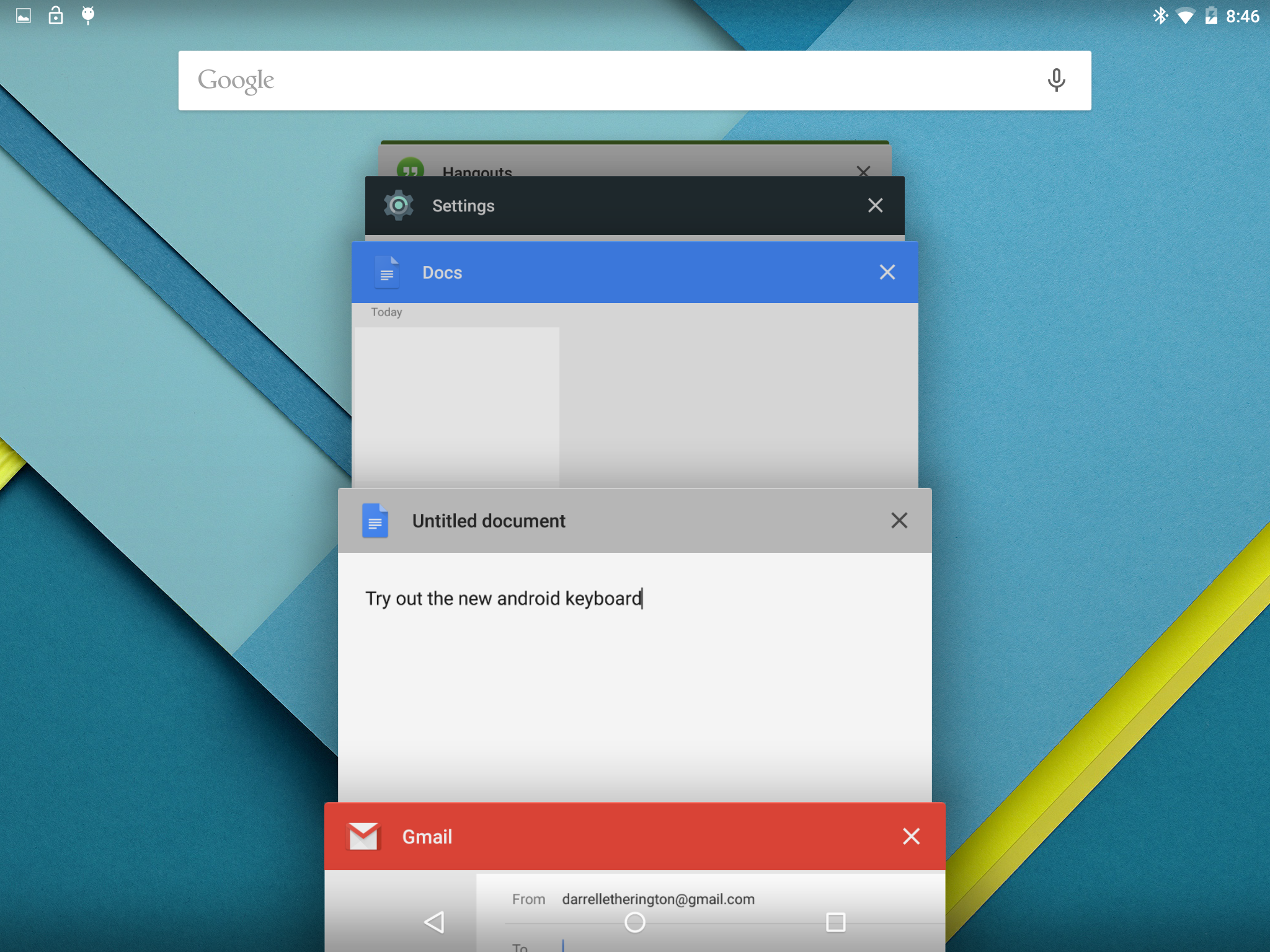 Other software features that really shine on the Nexus 9 are Lollipop’s new multitasking interface, which uses a ‘cards’ style flip-through mechanism complete with full previews of your last-known app state. Flipping to recent apps will put you back right where you left off with nary a stutter, but apps that have been in the background for longer will resume from a battery-saving suspended state, and depending on what kind of app you’re using, that could be more or less inconvenient. In a game, for instance, you could get booted to a menu, but in most software it’ll just take a couple of seconds to get you back to where you were.

The other Lollipop feature that’s perfect for this device is the account switching and guest account feature. From the lock screen you can access other accounts registered on the device or just jump in as a guest. This will silo and protect your data, but ensure that households with shared tablets (which is most tablet-using homes, statistically) will be able to all partake without worrying about stepping on anyone’s toes. It makes the Nexus 9 great for passing around to guests without fear of over-reveals. 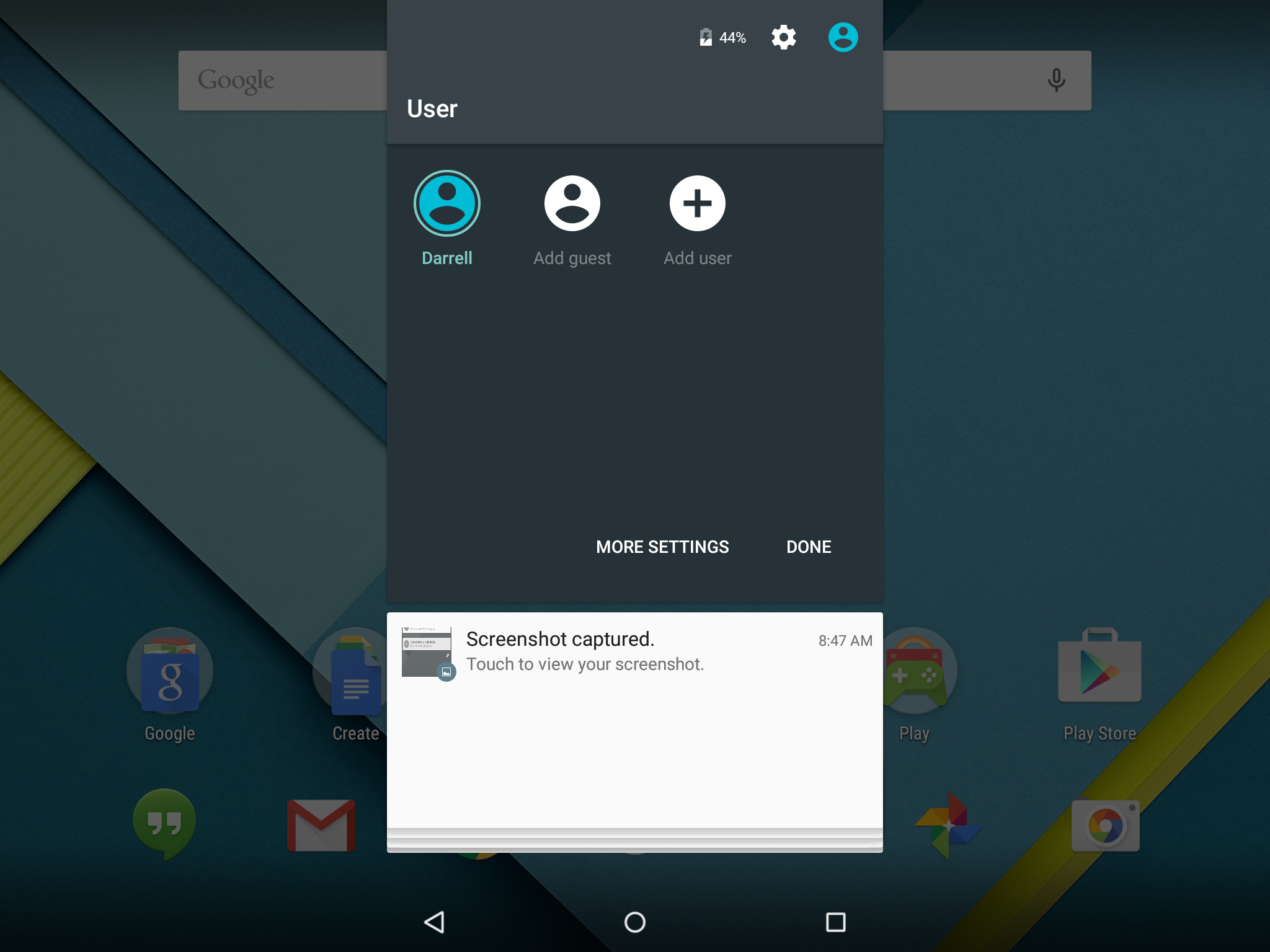 HTC hasn’t skimped on specs with the Nexus 9, and this one can go toe-to-toe with the heaviest hitters in the industry. The Nvidia CPU and GPU combo are ideal on a device that has a big, beautiful screen with 288ppi pixel density, letting you play games and watch HD video content without performance lag or stutters. 3D games like Dead Trigger 2 and Real Racing 3 look great on the Nexus 9, and you get the sense that its computing prowess can handle even more, especially given how well it deals with the many subtle but sophisticated animations and visual flourishes dished out by Google as part of its Material Design overhaul in Android 5.0.

Zipping between apps using the new multi-tasking features also works well, though the “Ok Google” command was less consistent in terms of how often I had to repeat myself. This is likely a trade-off resulting from the new voice-training feature to prevent it from responding to any phrasing resembling the request of the search engine. Sound performance from the speakers, as mentioned, performed well, and you can actually get really good volume out of the front-facing speakers with minimal distortion at top levels.

In terms of battery life, this is one of the better Android tablets I’ve used, and in mixed use it gets between eight and nine hours of active engagement. Standby is very impressive here, too, as HTC has managed to almost attain the kind of screen-off energy savings that still make the iPad stand out above the rest of the tablet field when it comes to power management. The Nexus 9 is rated at a full 30 days of standby, and it wouldn’t surprise me to find that it can manage that if left untouched. 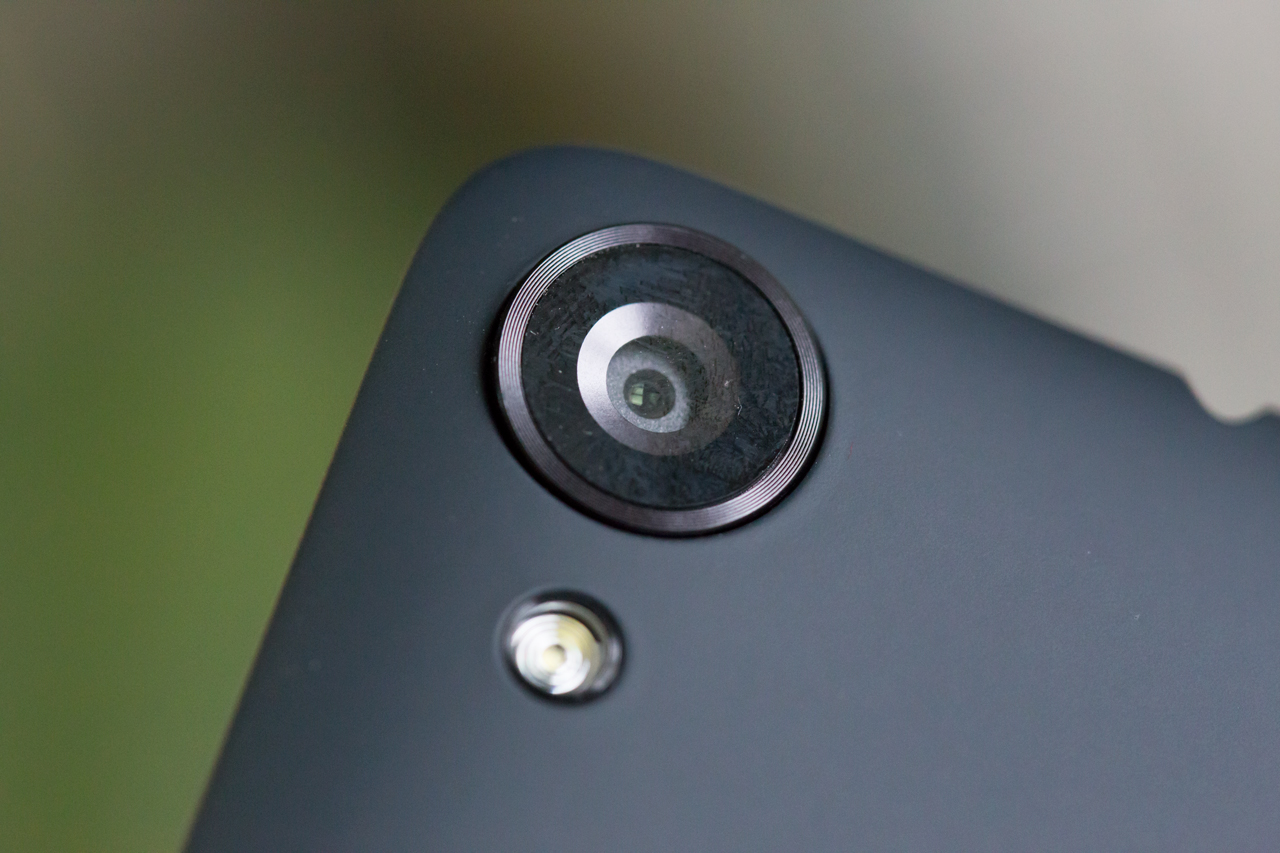 When it launched its new iPad Air 2, Apple touted the improvements to the camera; HTC’s Nexus 9 isn’t a stellar performer in that regard. The 8-megapixel rear shooter hunts for focus in anything but the best lighting conditions and resulting photos are also grainy in low-light, and the flash doesn’t try to do anything more sophisticated than wash out a subject completely. Shutter lag is so significant you’ll probably have missed what you were trying to shoot by the time the tablet takes the picture anyway, however, so the other complaints aren’t even going to matter much in the end. In short, do not buy the Nexus 9 if you’re interested primarily in tablet-based photography.

The Nexus 9 may not have quite the pixel density of either the Nexus 7 or the Nexus 10, but the screen is still plenty dense enough that you won’t be able to discern individual pixels. Text is crisp, and colors are cool and slightly muted, which is in keeping with other Nexus devices in recent years and which is, to my eye, much preferable to the warm and over-saturated displays favored by some OEMs like Motorola. 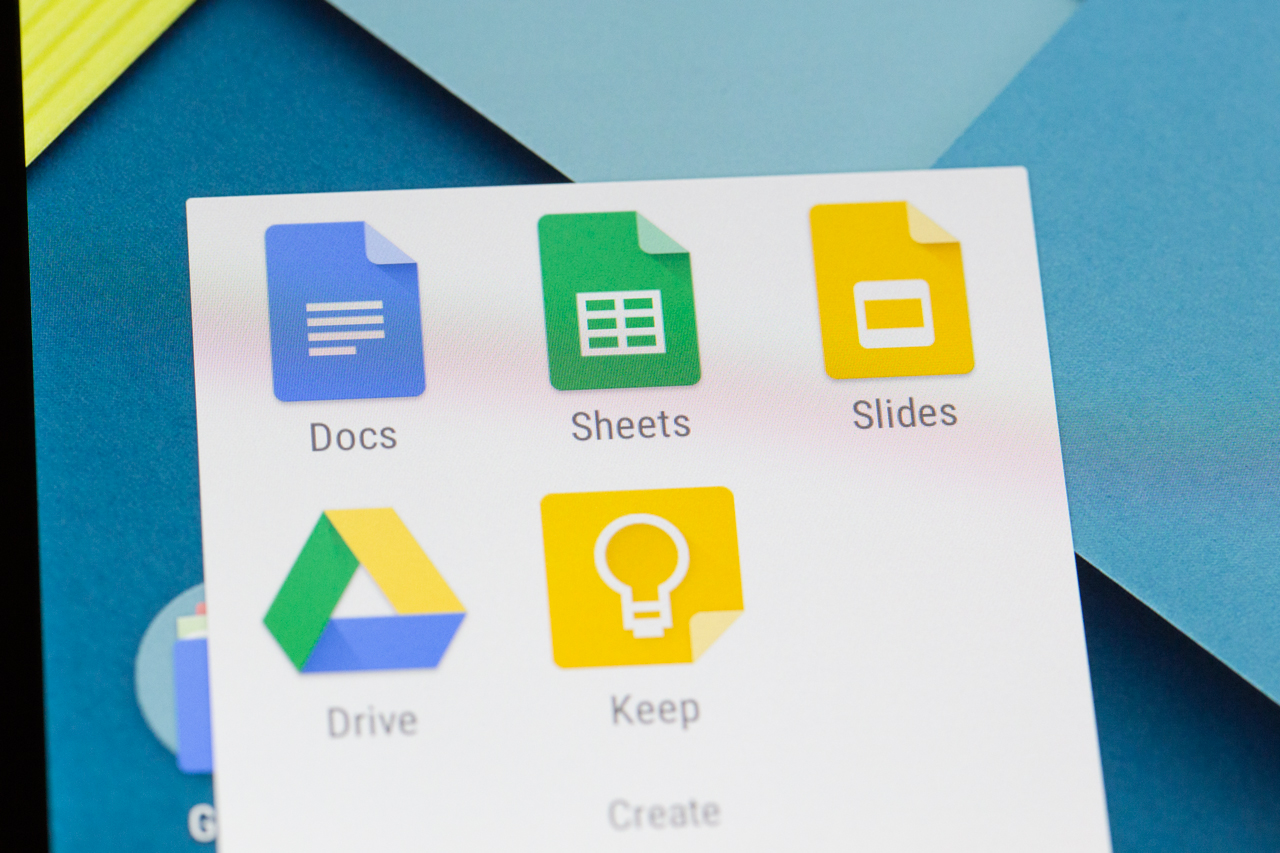 Back-lighting is mostly even, although my unit exhibited an ever-so-slight halo effect to the top of the screen, making for about 2 mm of overly bright display area. It’s unfortunate, and one of those things that you’ll notice from time to time once you see it, but it’s not a deal breaker. The screen still performs well both for watching HD video content and for reading text on either light or dark backgrounds.

The Nexus 9 also marks a move to the 4:3 aspect ratio used by Apple in the iPad as opposed to the 16:9 aspect ratio of the Nexus 7 and the 16:10 ratio of the Nexus 10. That makes it less ideal for watching TV shows and movies, but arguably better for almost anything else, including working on documents in portrait or landscape orientation and browsing the web. I prefer the 4:3 setup to the Nexus 7’s arrangement, as it feels less constrained side-to-side when you’re working with basically any applications.

Google’s Nexus tablet line has always offered a good balance of performance and value for those interested in an Android slate. The HTC-made Nexus 9 is among the best Android tablets in terms of pure performance. In that regard it lives up to this tradition, and also shows that despite taking a few years off, HTC can still go toe-to-toe with other Android OEMs in the tablet game. But at $399 the Nexus 9 has to square off against the iPad Air, which Apple still sells at the new price of $399. Lollipop gives the Nexus 9 some built-in software features that the iPad can’t match, including multiple user account switching, but ultimately Apple’s iOS tablets still blow away Android slates when it comes to third-party software choice and quality. 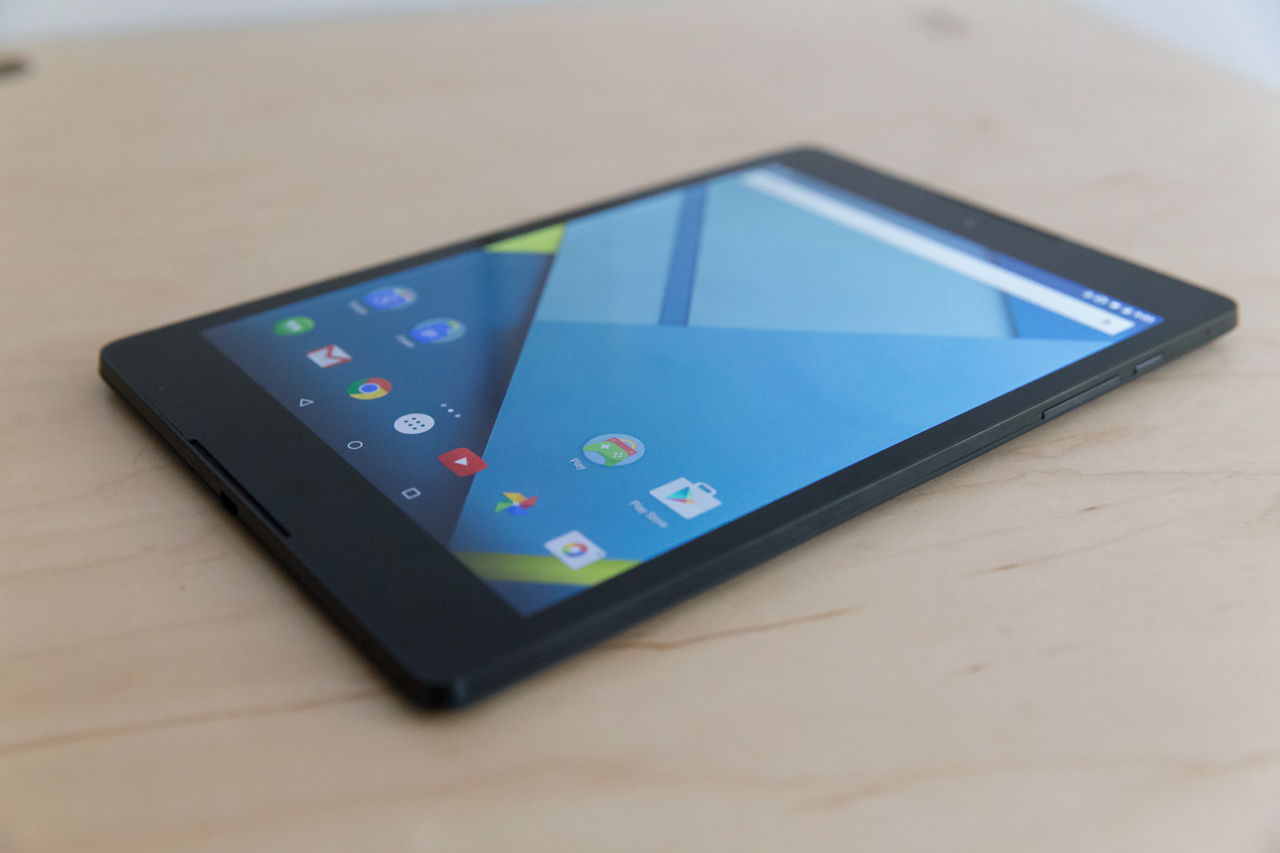 If you’re still looking primarily for a tablet outside Apple’s ecosystem, however, the Nexus 9 has no real peer; its unadorned Lollipop OS trumps anything from Samsung, and its closest competitor is probably the Nvidia Shield Tablet, which, while definitely better for an audience concerned specifically with gaming (and crossover PC gaming in particular), can’t quite match the Nexus 9 in terms of features and specs that appeal to a broader consumer tablet audience.