With the release of Lollipop, the latest version of Google’s Android operating system, we should also be getting the first big wave of Android apps using the company’s “material design” principles.

Google first announced material design over the summer, and this TechCrunch post, published after the company released more details last month, has some specifics about what material design actually entails. On a broad level, there’s an emphasis on bright, bold colors, as well as animations and interactions that are grounded in real-world physics.

When I sat down with Matias Duarte, vice president of design for Android, and designer Nicholas Jitkoff, we talked less about the details of material design and more about the thinking behind it.

Jitkoff told me the goal was to create “a system for design that would work across all our platforms.” He added that he wanted apps to be able to “scale elegantly” as they moved onto bigger screens like laptops — as an example, Jitkoff noted that on those bigger screens, there’s a temptation to “wedge more content on-screen,” but sometimes it makes more sense to show the same amount of stuff, just in a bigger, bolder way. 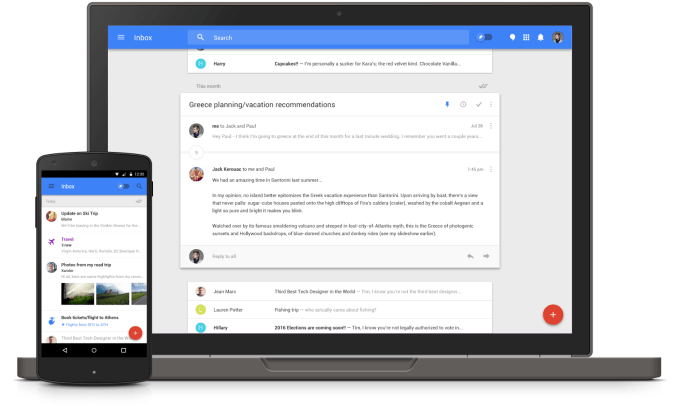 I mentioned real-world physics earlier, and indeed, Duarte and Jitkoff showed me photos of the actual paper objects that the Google design team played with as they put these guidelines together. To be clear, material design apps aren’t completely restricted by what they could or couldn’t do in the real world. (At this point, I was expecting someone to invoke skeuomorphism, but nope.)

“In the real world, there’s no material that can scale and change its shape like this,” Duarte noted. The goal, he added, is to recognize (or, I suppose, create the illusion) that there’s “actually a world that lives inside these screens — it has physical laws and properties that are similar to the real world.”

As Duarte and Jitkoff talked about some of the third-party apps redesigned for these guidelines, I became curious about whether designers at other companies were expected to go through the same process of building physical models. Jitkoff said that was more of a one-time experiment.

More broadly, Duarte said that Google isn’t treating these ideas as rules that other companies must follow: “When you have rules, you have to have ways to enforce them.” Instead, with Google’s guidelines and technical framework, the company is trying to create “paths of least resistance.”

You should, however, expect all of Google’s apps to be material design-compliant moving forward (Google’s new email app Inbox is an example that came up a couple of times).

“Internally, we crack the whip,” Duarte said, though he also noted there will be a few small lapses. After all, it’s early days.

You can read more in this Google blog post.