It was surely only a matter of time before someone thought to capitalize on the current trend for wearables with a battery designed to charge via kinetic energy. And so meet Ampy: a spare battery pack, currently bidding for crowdfunds on Kickstarter, that straps to your person and, its makers claim, charges up from human movement, such as walking, running and cycling. So instead of just quantifying the number of steps you’ve taken you could convert those steps into stored charge in a lithium-ion battery pack to help juice up your mobile devices via USB.

It’s a nice-sounding idea in theory — if you don’t mind the thought of strapping a rather chunky battery pack onto your person and running around the streets — but, as with all crowdfunding projects, it pays to be a little sceptical of how effective it will prove in practice. And indeed whether it will make it to market at all. Hardware is always hard.

Ampy is currently just a prototype, with its Chicago-based makers raising crowdfunding to step up to fully fledged production. At the time of writing they’ve smashed their original funding target of $100,000, with more than $245,000 raised so far — and another 10 days left on their campaign — so they do at least have the funds to deliver on their product promises. They are also giving themselves a lengthy period to deliver the goods, with the device not due to ship til June 2015.

The Ampy battery will hold just 1000mAh of charge meaning it’s a smaller capacity than most smartphone batteries so is only going to offer a top-up charge for most of your handheld devices.

“As you move, your motion couples with the magnets inside Ampy’s inductors, producing electricity and recharging the internal lithium-ion battery,” says Ampy co-founder Tejas Shastry, explaining how the charging mechanism works. “The more you move and the faster you move, the more energy you generate. We’ve found that running is one of the best ways to generate energy Ampy outputting up to hundreds of milliwatts.”

“A typical day of walking for a city dweller (10,000 steps) can give you up to 3 hours of battery life for your smartphone. The instantaneous power output is lower than for running but still enough to provide charge your phone,” he adds.

Although the Kickstarter campaign page doesn’t (yet) show the device actively charging (i.e. from human activity) the project makers have provided an email update to backers which includes a couple of GIFs apparently showing Ampy hooked up to a current meter and generating a charge while it’s shaken/strapped to a runner’s leg:

“Tens of milliamps leads to peak power of over 100 milliwatts,” it adds in the email update. “While peak power is interesting, the best way to calculate the amount of energy that can be delivered to your phone is by measuring the change in voltage of AMPY‘s internal battery before and after generating energy. This is how many electronic devices determine how much charge is in their battery.”

The project is also badged as ‘Dragon Certified’, by the hardware crowdfunding Dragon Innovation platform.

A spokesman for the certification program confirmed to TechCrunch it has checked out the Ampy project. “Our engineers reviewed their CAD files to perform an in-depth Design for Manufacturing review. We are able to ensure that it can be manufactured and assembled. Our COGS analysis further determined what their minimum funding threshold had to be and if that minimum funding threshold was achieved (which it has been in this case), the product could be built,” he said.

“Though our focus is on manufacturability, one outcome of the analysis was that our engineer was able to determine that the product does in fact generate enough energy in the coils and high enough voltage to drive all the circuitry.”

As well as hardware the team are building a companion app where users can quantify the amount of energy they’ve generated and also the amount of calories burnt from their battery-generating exertions. 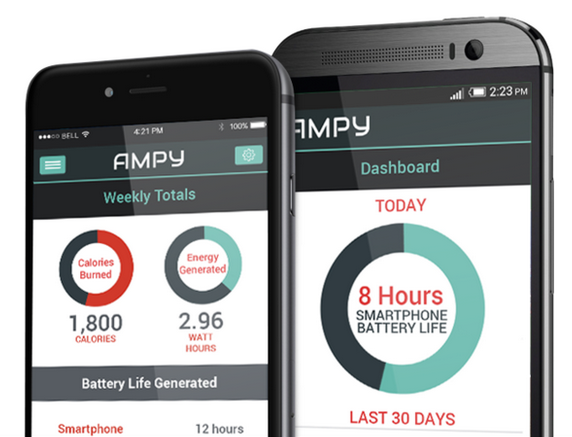 On the lengthy timescale for shipping Ampy, Shastry had this to say when we asked: “Scaling a manufacturing operation takes time, and our manufacturing schedule is one of the points that Dragon Innovation helped us set. You can check out the details of what they certified here. Even with a production-ready unit, you have to account for tooling, assembly, and shipping lead times.”

If you’re convinced enough to give Ampy a whirl, it’s up for grabs on Kickstarter starting at $85 (for the battery without the accessory straps pack).

One thing is certain: battery life continues to be the biggest constraint for mobile usage. And so while our thirst for apps continues to outstrip the capacity of the batteries inside our mobile devices then there will be a market for Ampy and other battery topper-upper mover-and-shakers.