You could call it Picture-In-Twitter. Last week Twitter launched its dockable audio Card, and similar functionality is appearing for video so you can keep watching clips as you browse Twitter on iOS and Android. As demonstrated by a Call Of Duty tweet I spotted, the Twitter Player card lets you view a video full-screen or tap to dock it to the bottom of the screen so it continues playing as you surf around the Twitter app.

By making video less interruptive, Twitter could encourage views of both user-generated clips and video ads. And one day, dockable video could let you watch and second-screen tweet about the content all from within the Twitter app. 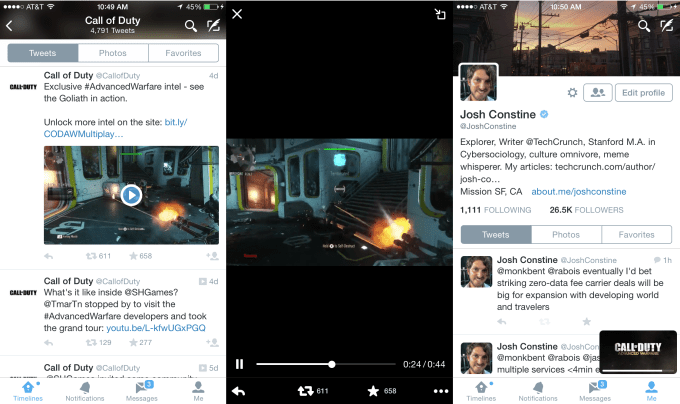 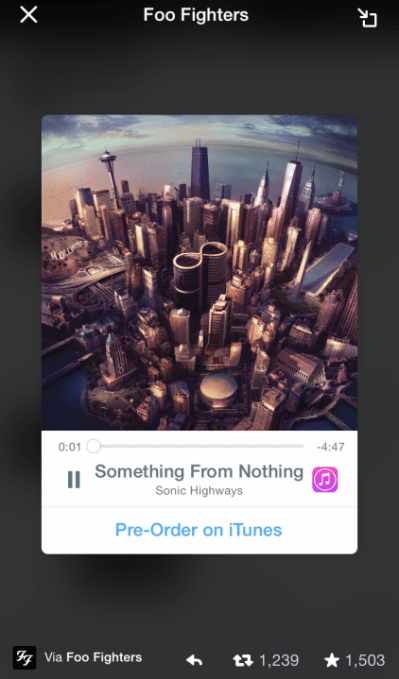 Twitter’s audio card launched last week in partnership with SoundCloud and iTunes to let you listen to music from a docked player as you navigate the app. This effectively lets you create a soundtrack for your Twitter session, or discover new music while reading other tweets.

The docked video functionality is reminiscent of YouTube’s picture-in-picture option for browsing while you watch. I’ve reached out to Twitter for details on the dockable videos. [Update: The Next Web wrote about an early version of this design in August, but it’s been updated with rounder edges, and a smaller, less obtrusive docked player size.]

As a video plays in the dock, a white progress bar denotes how long is left in the clip, and audio keeps playing if you go to compose a tweet. The video card isn’t quite as graceful as the audio card, as you’re certainly not getting the full experience from a tiny, thumbnail-sized video player in the corner of the screen.

The dockable video player is still useful, though. You could start a short-form video like a commercial, highlight clip, or trailer in full-screen, then dock it as it finishes up to still listen in or make sure you don’t miss anything cool at the end. If something from the little player piques your interest, you can tap it to bring it back to full-screen.

The bigger opportunity might be in long-form video. Imagine following along with a docked video of a sports match or awards show as you read and post tweets about the event. Twitter’s long been seen as a companion to TV. But by ditching the television set and subsuming its video content, Twitter could be the only screen you need to step up to the global watercooler.