The idea behind the Apple SIM that comes in the new iPads is most excellent: one SIM, many carriers. Whenever you want to switch carriers, you’d just pop into settings and pick the new one. If you want to bring your own SIM, you can — but otherwise, everything happens through software. No swapping SIMs, no ordering new SIMs, no hassle.

Alas, someone had to go and throw a wrench in the gears. AT&T (who else?) is mucking up the whole thing.

For now, the Apple SIM is compatible with four carriers: T-Mobile, Sprint, and AT&T in the US, and EE in the UK. (Note the lack of VZW support in the states; seems they’re not very into this idea just yet.)

With three of those four compatible carriers, you’re free to stretch your legs, hop between the offerings, and find the carrier that fits your needs.

Pick AT&T, however, and you get a nasty little prompt: “Once activation is complete,” it reads, “this Apple SIM can only be used with AT&T. You will need a new Apple SIM if you change carriers in the future.” 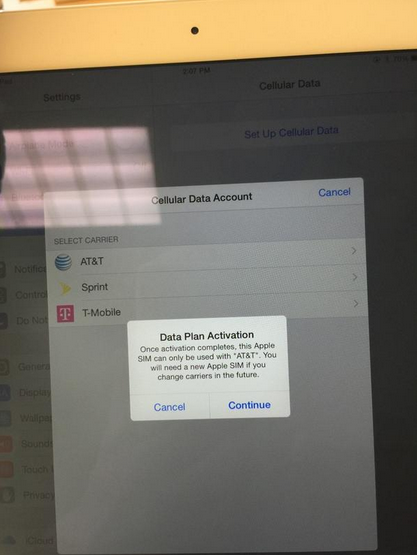 Using Apple SIM, you can choose from different cellular carriers and their various programs. The data plans vary by carrier. For instance, in the United States, you can choose a domestic plan from either Sprint or T-Mobile and also pick an alternate plan from the other carrier as needed. When you choose AT&T on iPad Air 2 and iPad mini 3, AT&T dedicates Apple SIM to their network only.

I’ve received confirmation from AT&T that they’re doing this, though I’ve requested further clarification as to why they’re doing it. No response there yet.

But when you get an Apple SIM, you expect it to work a certain way — and for it to continue working that way. AT&T — or anyone else, moving forward — doing this to an Apple SIM post-purchase is really just screwing up the whole idea. If this is its way of resisting the wave of change heading in its direction, then it’s just going to look like a jerk in the long run.

As you might expect if you’re familiar with the guy, T-Mobile John Legere (who also posted the image above) seized the chance to declare a victory:

On Ipad with@apple sim here is what u see..no @Verizon ,@ATT trying to lock u, @sprint with error page! @TMobile wins pic.twitter.com/z0jDZ9sRt5