Until recently, if you wanted to install an application from Amazon’s own Appstore onto your Android device, you would have to install the Amazon Appstore app separately. And this is a bit of a hassle, since you can’t exactly just download the app from Google Play. But last month, Amazon quietly rolled out a new feature within its main Amazon application on Android which now includes a fully-functional Appstore that’s accessible directly through the Amazon app’s “Shop by Department” section.

There, right at the top of the list of Departments, is a new category called “Apps & Games.” And this isn’t just a list of apps that Amazon has for sale elsewhere in its Appstore app – it’s actually a complete app store in and of itself, tucked away right within the main Amazon application. 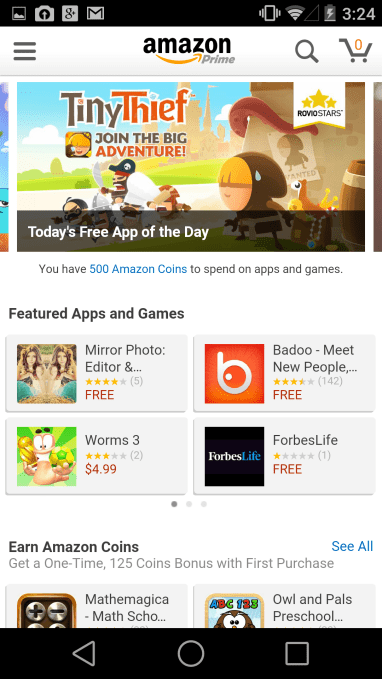 According to an Amazon spokesperson, this section launched on September 9th, and we were pointed to a press release for reference purposes. “Our customers want to go to one place to find all selection, whether it’s physical or digital, so we now offer the ability for customers to purchase videos, songs, audiobooks, apps and games from within the Amazon app,” the spokesperson explained.

However, the press release in question doesn’t really detail the part about Amazon’s app now selling apps and games directly – instead, it’s focused on an update to the Amazon App for Android, which now enables purchases of digital goods.

Mainly, the release refers to Prime Instant Video selections coming to the Amazon App. But to make this work, customers are still required to download the Prime Instant Video player app from Amazon’s standalone Appstore. Additionally, said Amazon at the time, the updated app includes access to other digital purchases like movies to rent or buy, 30+ million songs, and tons of Kindle books and audiobooks. The new app also allows for free photo backup with Amazon Cloud Drive.

Left out was any mention of apps and games now being sold directly through the main Amazon application.

The move effectively turns Amazon’s flagship application – an app that has somewhere between 50 million and 100 million installs, according to Google Play’s data for the smartphone version – into an app store app that directly competes with Google Play, while also being sold on Google Play. (No wonder Amazon was trying to keep this quiet.)

Getting Started With The Apps & Games Store

But before you get too excited, be aware that Amazon’s “Apps & Games” section still requires users to uncheck the Security setting that prevents the installation of apps from unknown sources (i.e., anywhere that’s not Google Play.) This is the same requirement that’s in place for installing Amazon’s standalone Appstore app, but the process for making the change in the newly updated Amazon Android app is quite seamless.

In the Apps & Games section, which is laid out like any other mobile app store with big featured listings at the top, various promotions, top free and grossing apps, recommendations, and more, you can tap on an app listing to be taken to the app’s page. From here, you’ll see a standard listing with screenshots, a video (if provided), a description, and reviews alongside a button that says “Free” or shows the price of the download, if the app is paid.

However, the first time you try to download an app, you’ll be prompted to enable downloads if you haven’t already adjusted your Android phone’s security settings to enable downloads outside of Google Play. But Amazon’s app walks you through the steps with ease. (See above screenshot.)

A pop-up appears explaining what you need to do, you press “Continue” and then the following screen tells you the three simple steps, and provides a button that takes you directly to your phone’s Security settings area.

You then make the change, and are immediately directed back to the Amazon app which says “Set-up Complete,” and informs you that you’re now able to install applications from the Amazon app directly to your phone. 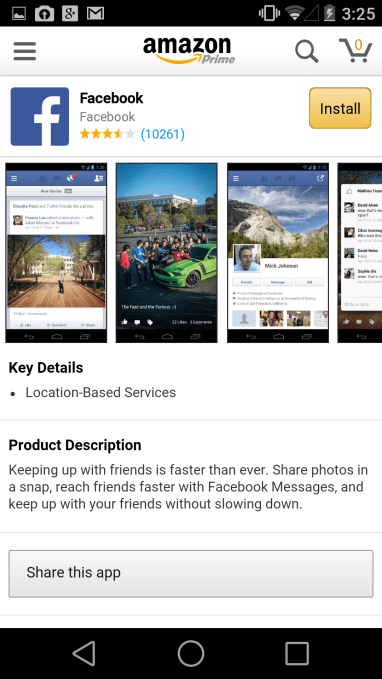 What’s interesting about Amazon’s quiet attempt to roll out an app store within its main application, is not only the expanded reach of its app store – though that’s significant – but also how the new section ties into your other Amazon activity and purchase behavior.

For example, on my Nexus 5, Amazon was able to recommend other applications base on my “Book Interests,” pointing me to apps for preschoolers (as I’ve bought books for my daughter on Amazon.com), apps “inspired by” my “browsing history,” which ties together what I’ve been looking for on Amazon to apps I might like (e.g. a search for “Finding Nemo” at some point likely inspired the recommendation of “Nemo’s Reef”). The app also recommended games for me to try, again seemingly based on my interests and prior activity.

The recommendations I saw were sort of hit-or-miss, but they’ll likely get better over time as I browse more on Amazon, shop, and download more apps. This access to a larger set of data gives Amazon’s app store – sorry, the Apps & Games Department – a competitive advantage over other app stores, including Google’s, which rely more on prior app download behavior and lists of what’s trending across the app store as a whole.