The situation was already bad when I first moved to San Francisco with my Jeep Cherokee three years ago. The hills were enough with the clutch, but one too many times spent looking for parking for more than an hour in my own neighborhood and my once useful Utah snow vehicle was sold to a nice old man in the East Bay.

Circling round and round the block actually accounts for up to 30% of traffic congestion in SF. And then of course there are the parking tickets and the street sweeping. It’s nearly impossible to avoid getting a ticket. There’s even an app that specializes in fighting your parking ticket battles for you – that’s how bad it is!

Luxe co-founders Curtis Lee, Craig Martin and Greg Zanghi are attempting to solve our parking hell with the launch of an on-demand iOS app that summons your own, personal valet wherever you happen to be within San Francisco city limits.

It’s not just something that affects San Francisco, though it seems so much more painful here than other cities I’ve lived in. Parking happens to be a $25 billion business in the US. Several VC firms in the valley have spotted the potential here and plunked a sizable seed round of $5.5 million into Luxe. Google Ventures, Redpoint Ventures, Sherpa Ventures, Lightspeed Venture Partners, Foundation Capital and Data Collective all contributed.

Sweetch is an app that attempted to solve SF parking woes a few months back by having “parking angels” save spots for people. That landed Sweetch and similar apps in a mess of trouble and it was accused of being part of “jerk tech.” The co-founders quickly switched to open source and seem to still be looking for a way to solve the pain points in street parking.

Luxe, in contrast, works in a very similar way to other ride share apps such as Uber, Lyft and Sidecar. You type in where you want the valet to meet you and the app shows you your valet’s profile pic and a map with a stated time of when your personal parking attendant can meet you there. What happens after that is a bit mysterious. The company apparently has some sort of deal worked out with several garages and parking lots in areas all over town. 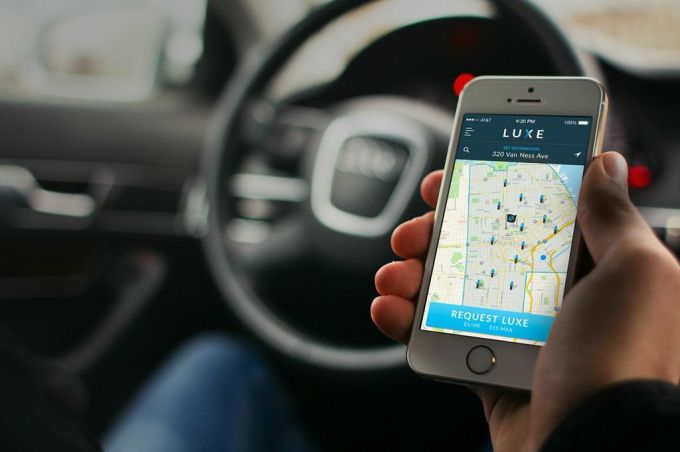 I took the app for a spin this last weekend, using my boyfriend’s car. We purposely chose a dinner spot close to a place in the mission notorious for scant parking options. SOMA and the Mission are the two most popular neighborhoods currently requested on Luxe.

I pulled up the app and told it where we would be meeting our valet. Within seconds it selected Esayas as our parking dude for the evening. Luxe gave me a clear picture of what he looked like and told me his favorite soccer player was Cristiano Ronaldo, which was random but I suppose the idea behind that is that maybe it helps you feel safer about who you are handing your keys over to. 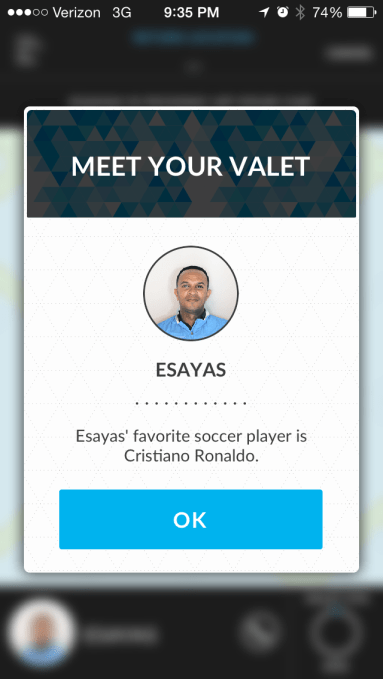 We were running a bit late for our reservation and I started to panic that we wouldn’t find Esayas in time. The app texted me to look for a guy in a light blue shirt, a custom uniform for all valet’s associated with Luxe. Just like with Uber, it also gave me a way to call or text so that we could communicate. Esayas turned out to be easy to spot in that light blue shirt, though. He was standing right outside the restaurant upon our arrival. 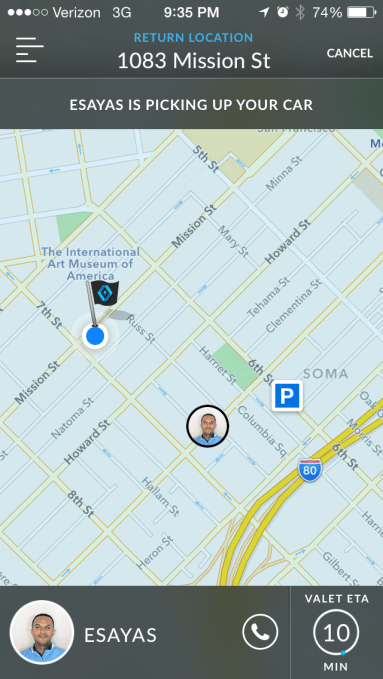 I looked at my boyfriend and asked him if he felt okay about handing over his keys for this experiment. He shot me a look like, “should I be?” Then shrugged and gave Esayas the keys. It was pretty seamless, although somewhat unnerving handing keys over to someone on a random new app, even though it wasn’t even my car. Lucky for us, Esayas was back with the keys when we told the app we were ready to get our car again.

According to Luxe, there’s a $1M general liability insurance policy to ensure your safety and security and it says it has trained and vetted all valets.

For now the app is focused on business use and dinners/date night so you can’t use it to park your car overnight somewhere – though a spokesperson for the company says Luxe has had a lot of those requests and that feature is possibly coming soon. It’s $5 an hour to let someone park your car for you, with a $15 max per day.