The crowdfunded fitness tracker Moov, built by former Apple engineer and HALO game designer Nikola Hu, Microsoft Research vets Meng Li (now Moov CEO) and Tony Yuan, has raised $3 million in new funding in a Series A round led by Banyan Capital. The additional capital follows Moov’s earlier raise of $1 million via a crowdfunding page on its own website.

There was early buzz around Moov’s new hardware-based fitness tracker shortly after its debut – the team passed its $40,000 crowdfunding goal in just 90 minutes and then went on to greatly exceed that.

The device the company is selling is designed to go beyond the usual “step tracking” data other fitness trackers collect, and instead uses a combination of hardware (9-axis sensors) and software algorithms designed to pinpoint a body’s movements (get it? “Moov!”) without using a camera. That means the device aids wearers who participate in other types of activities outside of running or walking, including boxing, cycling, weight lifting, swimming and more.

Moov’s hardware includes a waterproof watch-like gadget with a round face that can be worn on the wrist or ankle, depending on the type of activity you’re currently engaging in, for best results. 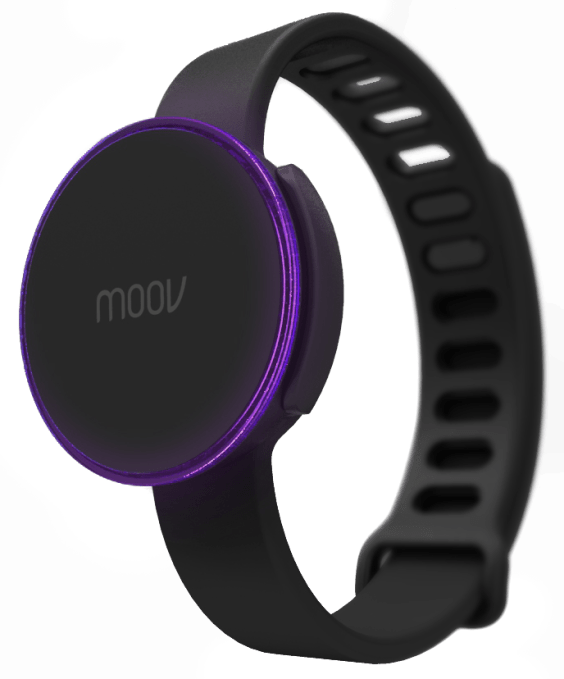 More importantly, Moov’s system includes more than just the tracking of data – it also offers real-time coaching and feedback based on how you’re moving, which can help users perform better while also protecting themselves from injury. In other words, it’s an attempt at putting a “real” fitness trainer in gadget format by offering a service that responds to your movements and then pushes and encourages you during workouts via Moov’s mobile applications.

The company is working toward offering a suite of applications designed specifically for the activity being tracked, including apps for running and walking, cardio punching, swimming, cycling, and more. The first two in that list are live now on the iTunes App Store, and others are in the works. Moov is also working on bringing its software to Android next month, along with the launch of several new apps. By year-end, Moov’s list of apps will have more than doubled.

Moov CEO Meng Li won’t disclose the exact number of units sold to date, but would confirm that the company raised the $1 million in presales during the first 2 weeks of crowdfunding, with unites sold for $50/each. (That’s 20,000 units sold in the first few weeks, to give you an idea.) Today, the company is selling Moov for $79.95 via its website, still on pre-order. This price includes one tracker, 2 bands and a charger, though those engaging in activities like boxing may want to order 2 devices for better analysis.

The 11-person team is now growing, as a result of the raise, Li notes, and the remaining funds are being put toward expanding the number of activities the Moov device supports, decreasing manufacturing time, and developing an SDK (software development kit) so other developers can build Moov-compatible apps.