Apple’s latest iPad update includes a redesigned iPad Air, just one year after the device was first introduced. Typically, Apple keeps the outside case design on mobile gadgets around for two years before switching things up, so the new slimmer Air is a remarkable feat in terms of hardware engineering. The new iPad also now comes in a gold color option, and packs a better camera and beefier internals, including an A8X processor that improves on the version just introduced for the iPhone 6 and 6 Plus in September. Apple lavished attention on the Air this time around, and that investment has made it the best tablet available anywhere.

Apple’s new iPad Air features a design that probably had more than a few hardware engineers burning the midnight oil – it shaves off a full 1.4 mm vs. last year’s model, which was then celebrated for its incredibly thin profile. Apple also dropped the weight to below a pound this year, also a savings vs. the previous model. iPad Air 2’s thinner design necessitated some changes, however, including the remarkable feat of fusing display glass and components in a single layer to decrease the required internal space, and the unfortunate removal of the physical rotation lock/mute switch on the side. That missing switch is indeed missed, and despite the presence of its functions in the Control Center panel, there were many times when I wished the physical control was still present.

The new iPad Air is a great device to hold, however, as was its predecessor. Holding them together really reveals just how much of a difference the additional size and weight savings make, however – even holding it while also holding an iPad mini reveals significantly less tangible heft, despite the smaller tablet being lighter. The 6.1 mm chassis just makes all the difference when it comes to the Air feeling like something that you could comfortably hold for long periods of time, and even for all-day computing, should you need it (and it’s easy to imagine an event coordinator, for instance, needing exactly that).

As reluctant as I have been to use the iPad as a camera, even when stuck without any other options, the iPad Air 2’s design does make it uniquely well-suited to that task. The huge screen is a remarkable viewfinder, as Apple remarked on stage during the iPad event last week, and its lightweight frame means that it won’t easily exhaust your arms, even when you’re holding it up to get a better angle.

Our review unit came in Apple’s gold finish, and let me just say that on the iPad, that means there’s a lot of gold going on. Apple’s take on this particular metal color is better than most, but this definitely isn’t my favourite finish. The Air 2 in either space grey or silver still looks fantastic however, and the gold is definitely going to stand out in a crowd, especially if you’re also using the iPad as a camera.

Apple’s latest iPad Air is easily the best-designed tablet out there, and that would be true even without the remarkable new ultra-thin dimensions it sports. But combining the extra sleek design with all that available screen real-estate means the iPad Air 2 is not only the best looking iPad out there, but also the most ergonomic, too.

The new iPad Air is unique among Apple’s lineup of products in offering the A8X processor, an enhanced version of the chip that Apple released in September to power the new iPhone lineup. The A8X uses Apple’s second-generation 64-bit mobile architecture, and improves CPU performance by up to 40 percent over the speed of the A7. Graphics performance is improved by a factor of 2.5, and with the help of Apple’s Metal game development technology, the company says this can result in unparalleled application performance when working with advanced visuals.

In practice, you get the usual feeling that comes with every new generation of Apple processor – that the device you thought was cutting edge until now just isn’t quite up to snuff. The previous iPads are still great devices, and extremely usable even years after their launch (which could account for slower upgrade cycles) but the new iPad Air 2 handles the visual flourishes and animations of iOS 8 with such aplomb that you’ll never even pause to think about them.

My review iPad Air 2 has done extremely well as a photography assistant, with Photoshop and Lightroom Mobile handling plenty of heavy lifting. iMovie, likewise, provides a great experience thanks to the beefed up internals on the tablet. But what’s most exciting are the experiences that have yet to be launched, including the mobile version of Pixelmator, which was demoed on stage at the iPad launch event. We’ve yet to see just how much additional processing power developers can wring out of the A8X, but even the first early attempts have shown a lot of promise.

The iPad Air 2’s battery performance is on par with that of previous generation devices, which is no small feat given that the volume of the batteries contained within is likely reduced to accommodate the new slimmer profile. 10 hours of mixed use is normal, I found, and Apple has once again delivered a device with an amazing life in standby mode, especially when you’re not using the built-in data connections. As for those, I found that Wi-Fi performed notably faster when used with my 802.11ac AirPort Extreme, while LTE on my local Canadian provider remained high, and likely carrier-limited in terms of what it was able to achieve, given the device’s new extended LTE support.

The iPad Air 2 has a few prominent new features that weren’t present on previous generations – the most useful by far is Touch ID. This is the fingerprint authentication tech that Apple introduced to the world with the iPhone 5s, and on the iPad Air 2, it serves double duty as a way to both unlock your device, and authenticate purchases, logins and more in third-party apps. 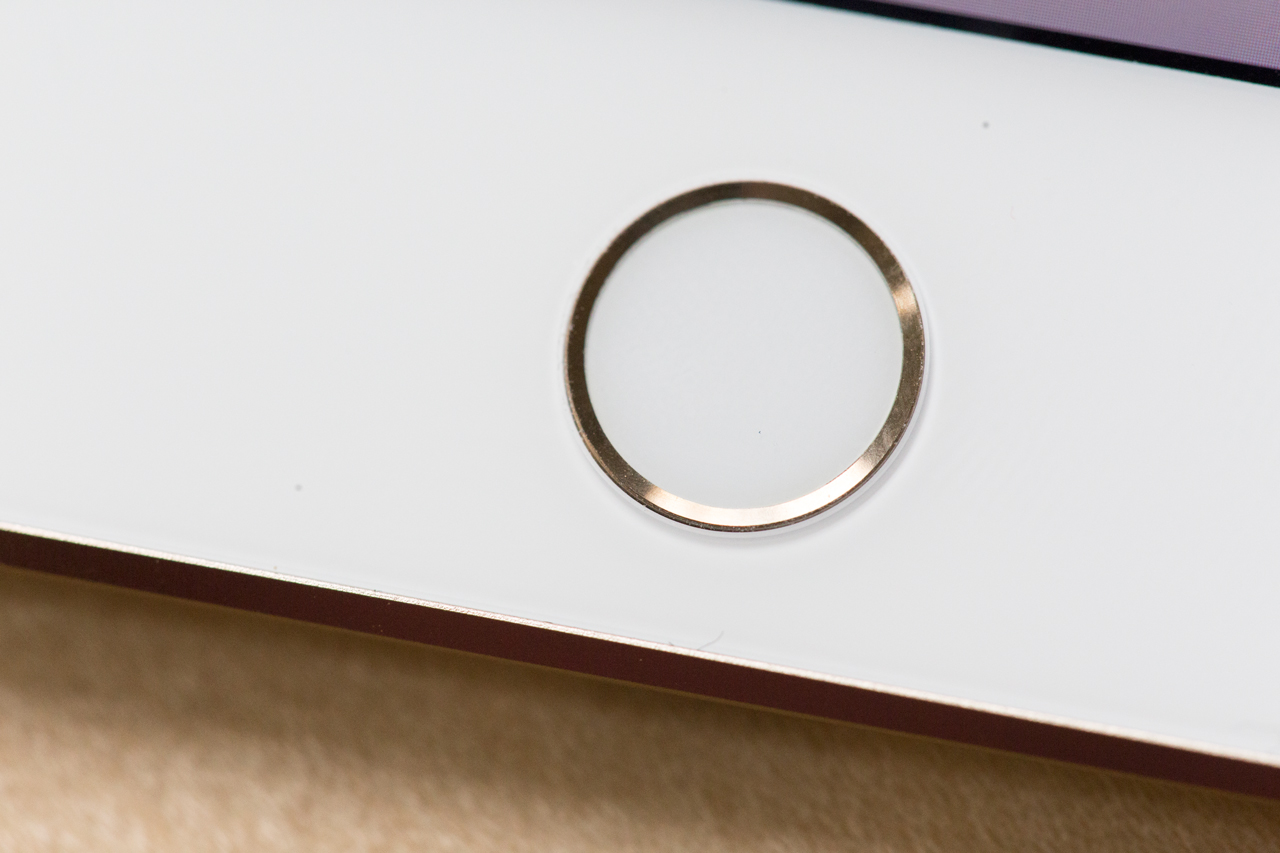 Touch ID on iPad Air 2 can’t enable in-store purchases, as Apple hasn’t included NFC in this device, with the logic being that no one wants to wave a large tablet in front of a payment terminal to conduct a transaction. That’s pretty sound logic I’d say, and the fact that Apple did include both Touch ID and the secure element that enables payments for e-commerce purchases is far, far more significant than its retail ambitions, especially on a device that is fast-becoming the most popular in the world for online shopping.

It is indeed convenient and easy to use Touch ID with apps like Postmates that support it to transact payments, but the bigger benefit here from a general use perspective is just the added convenience of being able to unlock your device with a thumb press. I’m guilty of never having used a passcode on my iPads in the past, simply because unlocking them was too arduous, and because it seemed somehow more acceptable since this was a tablet, not the smartphone I carry around in my pocket constantly. With Touch ID, my data is now somewhat protected, which makes sense since I view and use the same content on both types of devices. 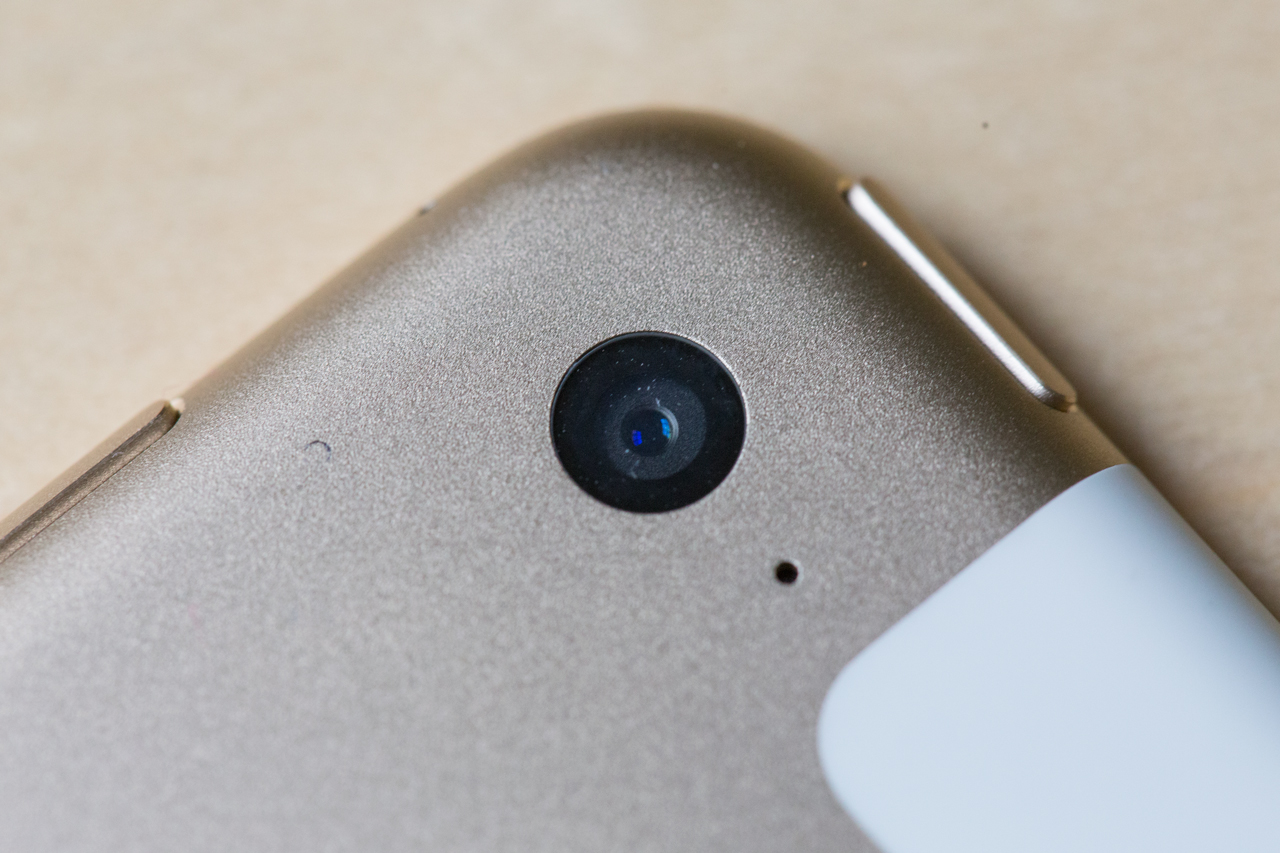 Another new feature is the improved 8MP camera, up from 5MP on the first-generation iPad Air. The camera can capture images at 3264×2448 resolution now, which is better for high-resolution displays like that of the iPad Air, and the new Retina iMac. But the camera isn’t just sporting better hardware – there are a lot of software additions, including high-res panorama capture, burst mode with 10fps capture, time-lapse and slow-mo video and improved face detection.

The slow-mo video can be seen in the example above, and captures content at the same 120fps rate introduced with the iPhone 5s. While that’s still only half the rate of the improved slo-mo video capture on the iPhone 6 and 6 Plus, it’s still plenty powerful for most casual users’ needs. Overall, Apple now appears to be taking the iPad’s camera seriously, and the resulting photos and videos reflect that.

iOS 8.1 is also part of the deal here, and that means you can opt to receive phone calls and texts from your iPhone on the iPad, and respond to them to. You can also pick up a browsing session from your phone or desktop, as well as continue an email and perform various other tasks using Handoff. If you weren’t quite sure how all these devices would work together for you before, Apple’s software update really makes the case that they’re truly a complimentary network of gadgets.

As part of its design changes, Apple moved the display closer to the glass to create a single component where once there were many, and the change works to improve image quality on the tablet, too. The screen appears just about flush with the surface, and more photorealistic than ever thanks to the new manufacturing process. 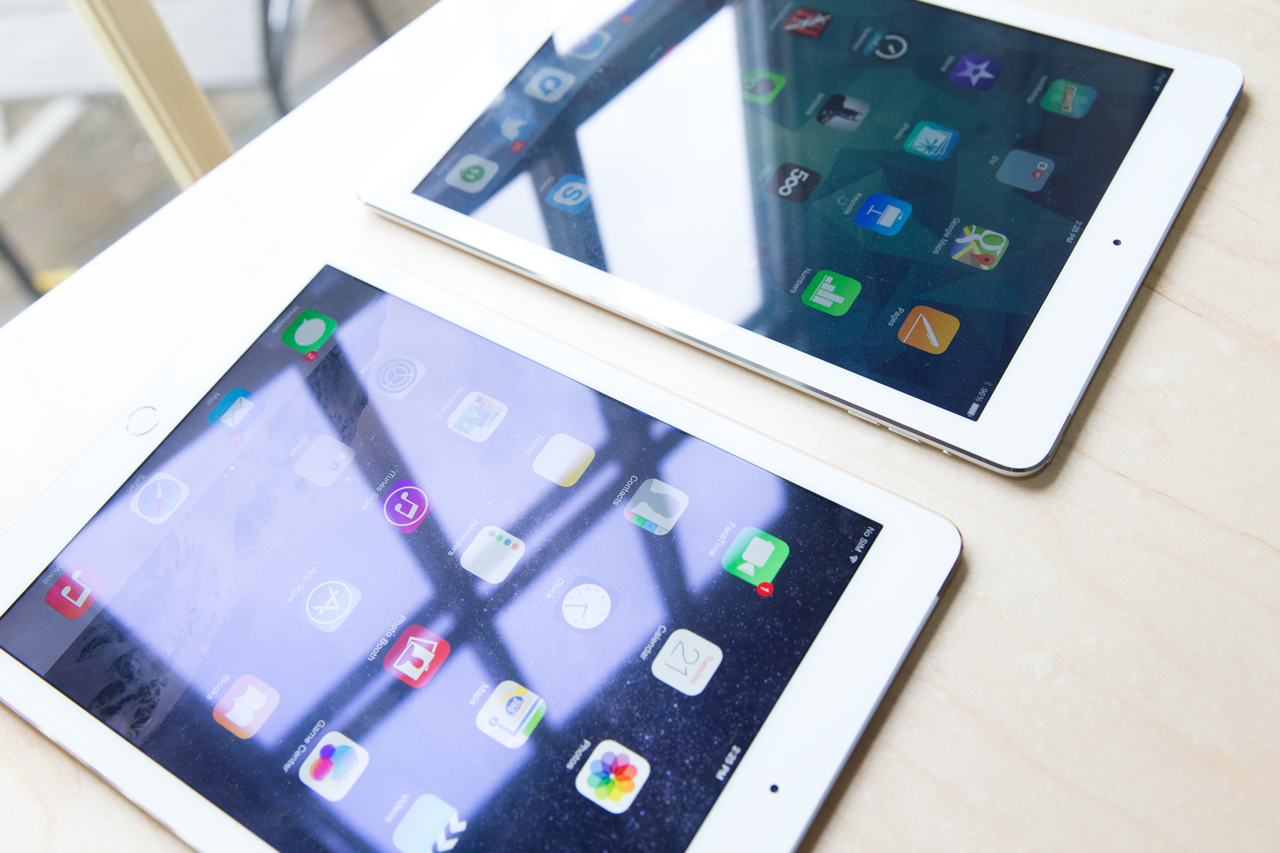 Resolution is the same as on the previous iPad Air, providing a 2048×1536, 264ppi Retina image, but Apple has also added a new antireflective coating to prevent glare. This coating is not what you might be expecting, if you were looking for something like the matte screens that used to be an option for MacBook Pros of old; it’s more of a way to slightly lessen the ghosted images you’ll see in bright environments, or reflected from other light sources. The change is definitely noticeable, but it isn’t extreme – the iPad didn’t suddenly become optimal for sunlight reading, though the modification does make it among the top performers when it comes to backlit display technologies, and you can see in the photo above how the sun through the window is much less pronounced on the new iPad than on last year’s iPad Air.

Apple’s iPad Air 2 cases include both a Smart Case and a Smart Cover, just as with previous generations. Both lock into place with magnetic closure elements, though the Smart Cover also connects its hinges to the side of the device via magnet. The cases are up to Apple’s previous standards with these devices, which is to say they’re well-made and do indeed offer good protection, should you feel you need it. The Smart Case will run you $79 for the iPad Air 2, or $40 for the iPad Air Smart Cover, which fits this model as well as last year’s.

Apple’s iPad is a category that in some ways is trying to define itself, now that it’s moving into its relative young adulthood. Larger phones mean that it will mean different things for users than it did when it was introduced four years ago. The iPad Air 2 is the best reflection of what a tablet likely means to users currently, though – it’s a big-screened slate with a gorgeous display, an exhaustive software library and powerful processing capabilities that you’d be comfortable holding all day, should you have to.

To build the iPad Air 2, Apple had to speed up and improve its usual hardware update process, and the intense focus and commitment required shows in the final results. There’s no question that if you’re in the market for a tablet, this is the best one available today.