Apple’s newest iMac has the best display ever on a computing device. Let’s just get that out the way right at the start: You won’t find a better screen anywhere else, period. The 27-inch, 5120×2880 screen has a PPI of 218, or roughly equivalent to that of the MacBook Pro with Retina display, but the specs on paper, while impressive in their own right, can’t convey the experience of actually using the thing. Apple’s price of admission for 5K goodness is steep, with prices starting at $2,499 (plus additional fees for custom configurations) but it’s worth every penny.

Apple’s 5K iMac doesn’t look any different from the rest of the lineup on the outside – the tapered design it introduced in late 2012, which is thick in the middle of the back to house the bulkiest internals, and then tapers to a remarkably thin 5mm on the edge, is still in use here. The use of the existing design actually makes the design accomplishments of this computer more impressive, however – Apple was able to completely re-engineer their display without adding any thickness or bulk, after all.

The industrial design still sings, too, even after two years of availability. Its edge-to-edge black bezel and minimal front-facing aluminum mean that the new Retina display almost floats on its own, and is free to show off its dazzling good looks without the presence of any extraneous visual distractions. The slimmer design also means that actually lifting and moving the iMac around isn’t all that strenuous of an activity, despite the display’s generous proportions.

Around back, you’ve got a fairly good selection of ports to choose from, including four USB 3 ports, and two of the new Thunderbolt 2 spec that promises even faster I/O transfer speeds. There’s also an SDXC card slot, a headphone port (which supports optical audio cable connections via mini-TOSLINK) and a Gigabit Ethernet port. The SD card slot is still marginally less accessible around back than it was on the side of the older, thick-bodied iMac design, but the concessions of a sleek all-in-one are slightly inconvenient I/O port placement, and that’s a pill I swallowed long ago.

While inputs around back isn’t ideal, Apple has gone to great lengths to make sure that this new iMac retains its user-accessible RAM slots, which means you can upgrade after the fact. That’s a huge advantage, given the cost of RAM via Apple’s custom configuration options, as compared to the cost of RAM purchased after the fact. It’s also an upgrade that most users won’t need right away, but one that can make a big difference to the usability and performance of a computer after a couple of years of ownership.

In the end Apple’s latest iMac design may be a carry-over from previous models, but showcasing the 5K display is the role it seems born to play.

The new iMac’s performance is impressive beyond just its ability to push pixels – though that’s nothing to sneeze at. In its base model configuration, the iMac with Retina 5K display comes with a 1TB Fusion Drive as the standard storage option, which offers a lot of performance advantages over a traditional spinning disk HDD on its own. The 8GB of RAM is a decent starting point, and the 3.5GHz quad-core Intel Core i5 CPU (which has Turbo Boost capabilities up to 3.9GHz) and AMD Radeo R9 M290X graphics processor will give most users ample muscle for even compute-intensive tasks like 4K video editing. 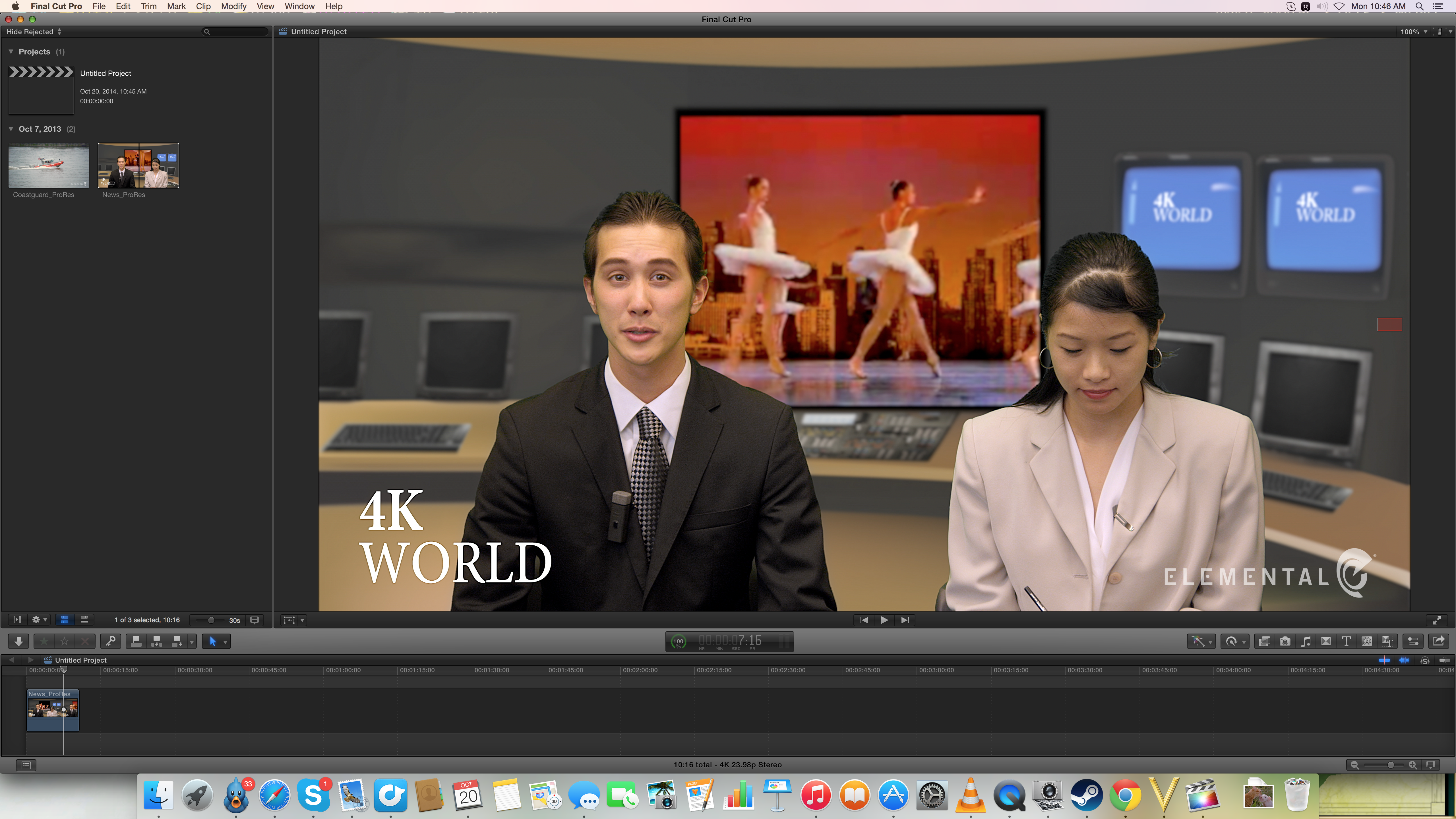 Speaking of 4K video editing, you can see a screenshot above of me editing a sample 4K video file in Final Cut Pro, with the video playing back at full resolution, which still offers room for editing UI in the Final Cut application. I had to hide the inspector in order to fit it in entirely, and maximize the size of the preview window, but it’s still possible, and for video editors working with next-generation film formats, that’s a huge advantage. Running the preview video with playback optimized for performance, I saw no visual hiccups, though maximizing quality did result in a few minor stutters during live rendering. Remember, this is using 4K source files at full resolution, which is pretty amazing.

The new iMac is also a powerful gaming machine, if that’s your thing. I played Civilization V on the machine at its max possible resolution (which is still just 3200×1800 in HiDPI mode, and therefore still scaled on the iMac’s Retina display) and the gameplay experience was smooth and fast, even in later stages of the game when the map gets a bit crowded with visual elements. Other action games, like last year’s Tomb Raider, also performed well. 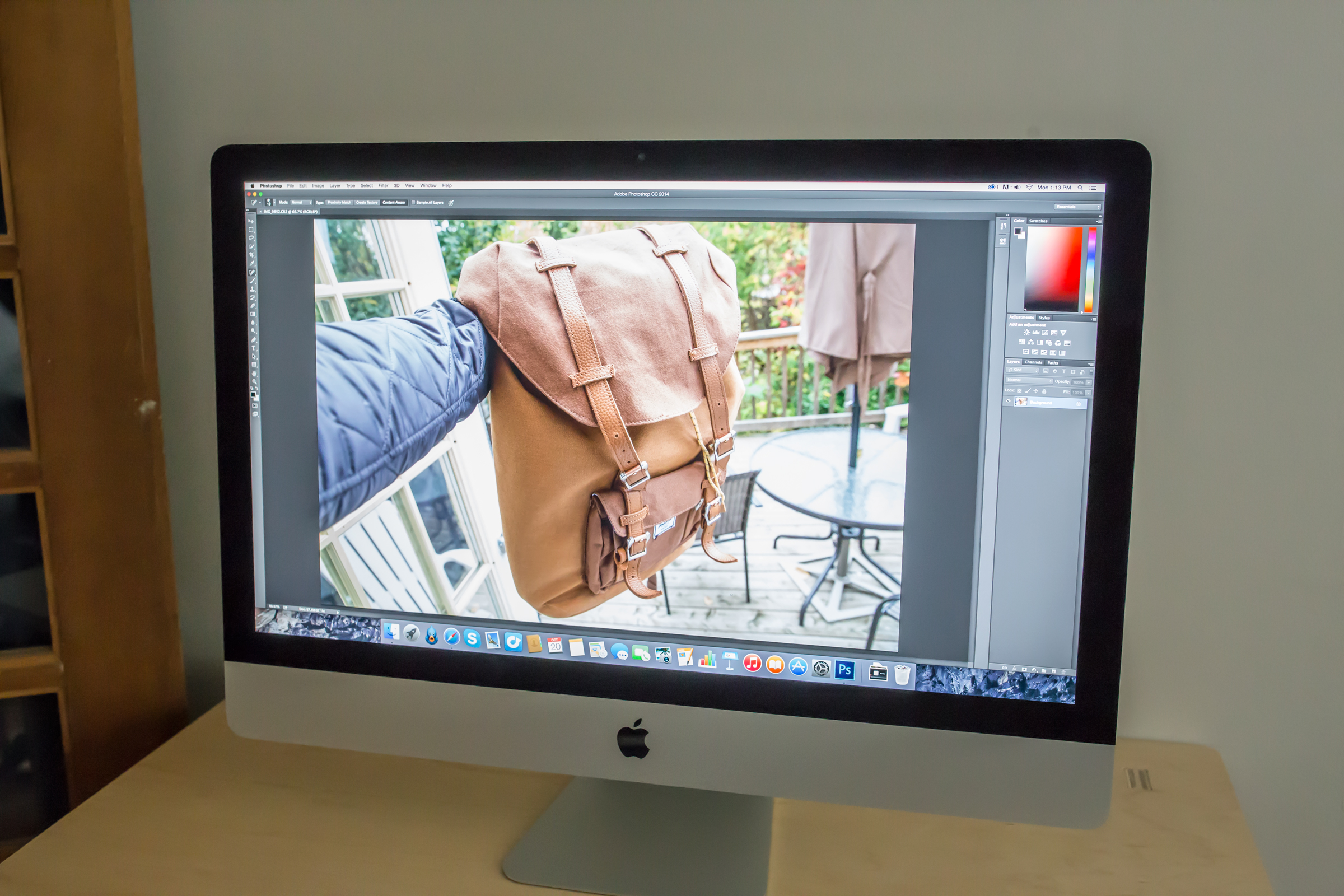 Photo editing with Adobe Photoshop CC is also a treat on this computer, with fast, responsive performance and execution of filters and visual effects. You can also work with RAW files right out of your camera, and using the ones from my Canon 6D, which have a max resolution of 5472 x 3648, I was able to work with them at 100% crop and almost fit the entire frame on the screen when using Photoshop in full-screen mode.

I was able to get the iMac’s fan going, which is not something that normally happens in my average daily use, by running Civilization V, Photoshop and Final Cut Pro X at the same time, and switching between activities on each, but during most everyday use, you won’t hear a peep out of the all-in-one’s onboard cooling system.

Let’s be honest – this computer is all about the screen, and the display is the factor upon which a buying decision from anyone considering it will rest. If you agree to that, then you must also agree that this computer is a must-buy for anyone for whom display quality is serious concern.

If you switched from an existing Mac notebook to the Retina MacBook Pro when it launched, or at any time since, you’ll have some idea of the change between the existing iMac and the one with the new Retina 5K display. Somehow, though, this is a switch that has even more of an impact, especially if you do any work in any kind of visual field, from photography, to film-making, to design. 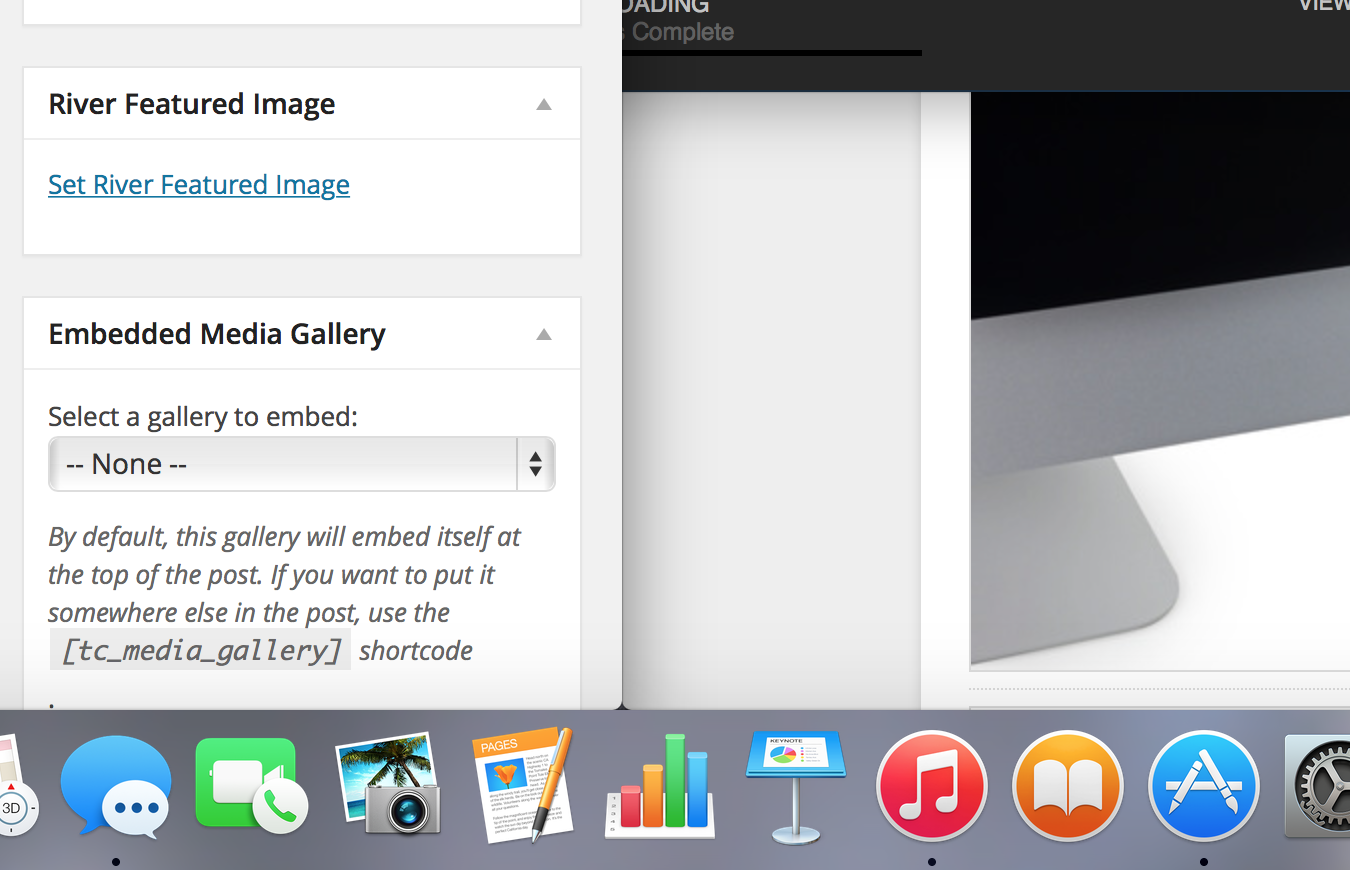 That’s not the only group this new machine will impact, however; this new display also represents a huge step up for any kind of information professional, owing to how beautifully it renders text (here’s a hint of how well it works – you can almost make out the actual words on the Pages dock icon). In the future, we’ll look back on the time since the introduction of the computer until now as a time between “print” quality and legibility when it comes to text. You can’t make out any pixels on text rendered on the new iMac, just as you generally can’t on a printed page (unless someone prints a low resolution image) and if you spend all day staring, reading and writing on your computer, that makes all the difference in the world. The new iMac makes lower resolution reading, writing and browsing feel like it happened during a relative Dark Age. 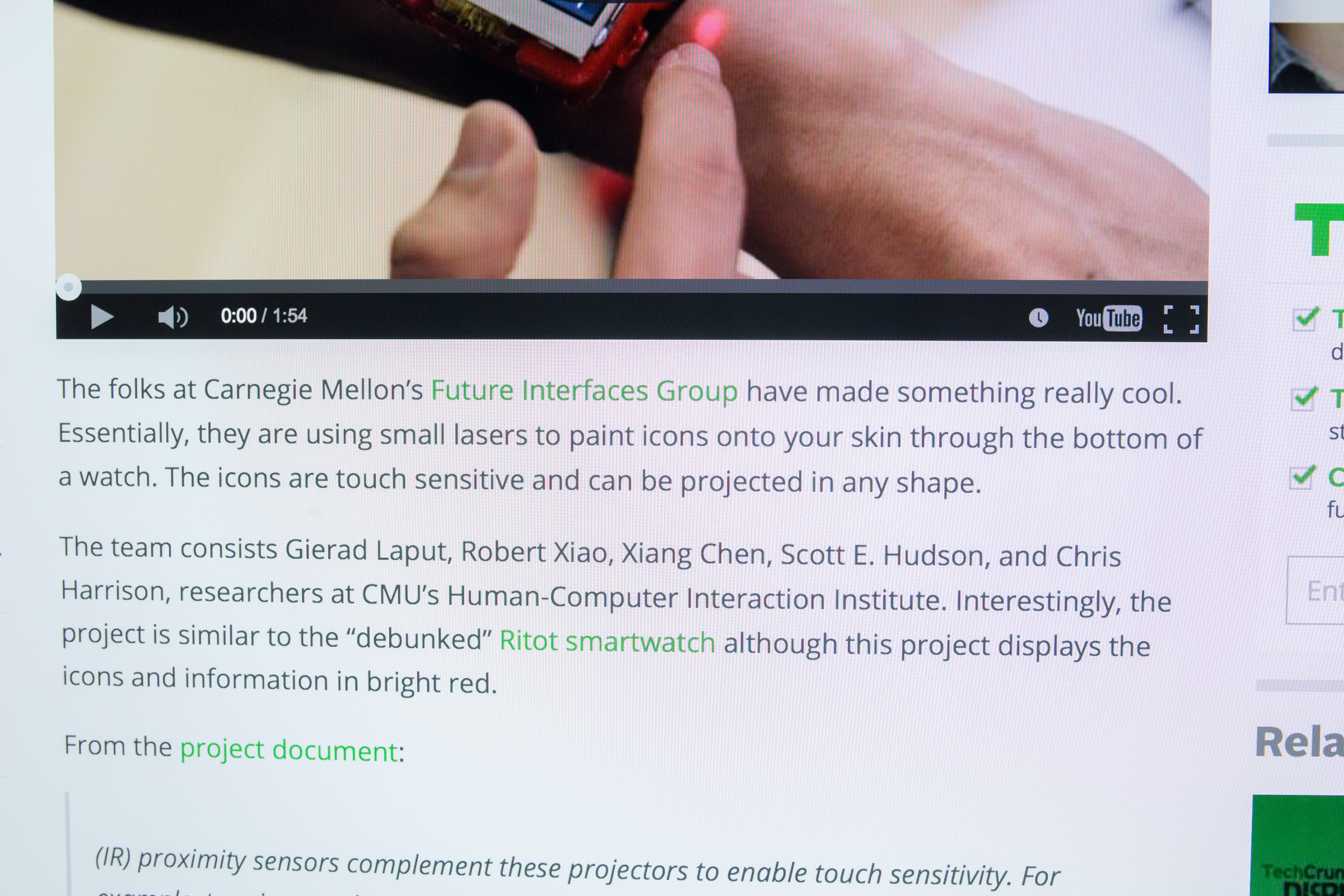 Apple’s display achievements here are something that have to be experienced to truly appreciate, but suffice it to say they’ve hit a home run. It took two years to adapt Retina display tech for the desktop, but now that it has arrived, there is most definitely no going back.

It’s easy to say that Apple has created an all-in-one that’s ideal for creative professionals, especially those with a visual focus, with the iMac with Retina 5K display. But that’s not all the company has done with this machine; instead, they’ve built a computer that provides the future, today, for anyone with the financial capability to get it. Retina on the desktop provides advantages for video, photos and design pros that almost make it a professional imperative, but the benefits it brings to everyday computing are no less impressive, and this is an iMac that will satisfy anyone who takes the plunge. A Mac Pro might be a more powerful performer, but for most people, the iMac with Retina display will be the best all-around computer for their needs.