If you’re tired of logging into different websites every time you want to access your Facebook photos, your Google Drive documents, your Instagram photos and so on, odrive may be the application for you.

The idea, basically, is to give you a folder interface for browsing all of your online files, almost as if they were files on your hard drive. You can think of it as a Dropbox-style interface for a bunch of stuff that’s not in Dropbox itself — the company describes it as “Dropbox for everything.”

Oxygen Cloud’s executive vice president Alex Teu said support for Salesforce and Box are going live later today — so even though it’s a consumer-focused product, you can use it for work, as well. And as I mentioned, odrive uses Oxygen Drive technology, including the company’s “progressive syncing,” where files that are larger than 10 megabytes only sync when you select them. That means giant files aren’t downloaded to your hard drive unless you want them to be.

Teu gave me quick demo of odrive, highlighting one of his favorite features — the fact that you can set up hashtag searches, creating a folder that will be updated in real-time. By setting up the right searches, Teu has been able to keep track of Instagram photos shared from the protests in Hong Kong. 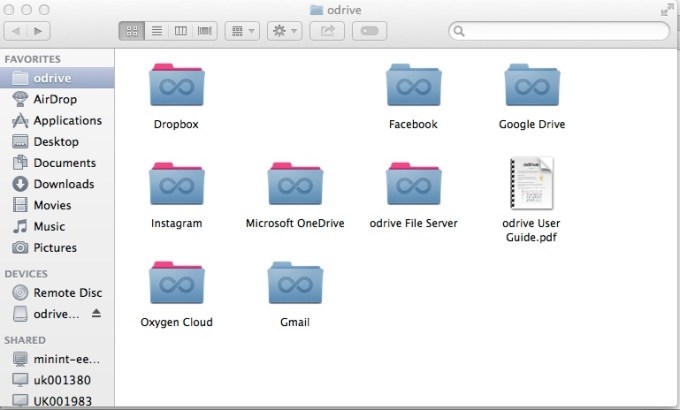 I also installed odrive myself. There were some initial hiccups; it takes a little while to log into each service (hey, at least you only have to do it once) and then sync the desired files. In addition, trying to access documents from Google Drive isn’t ideal, because odrive tries to open those documents in your browser.

Other than that, however, it was pretty much as fast and convenient as Teu said it would be. So if you agree with his claim that “everything in a folder is better,” then this is pretty much the perfect interface. And even if you’re not as enamored with folders as he is, having a single interface for browsing different services is still pretty cool.

Odrive is currently in beta testing and available for free. Teu said the company will add paid features eventually.