E-commerce retailer ModCloth has laid off additional staff across engineering, creative, product, producer, social teams and more in a second wave of layoffs. The news follows earlier cuts confirmed back in July which, at the time, affected around 70 employees, or a little under 15 percent of its then 500-person-plus workforce.

ModCloth confirmed the new layoffs to TechCrunch, explaining that the company was affected by a broader downturn in the retailer sector.

We’re hearing that most of the San Francisco team has been affected, with a headcount of around 40 or 50 or so being let go, and possibly some cuts in other offices. According to multiple sources, layoffs were made across the engineering and product teams, and the social team is being scaled back this December. Some copywriters in San Francisco were cut along with the blogging team. The producer team is not being dismantled, but it is being relocated to Pittsburgh after the holiday season. Also, ModCloth’s creative director is being let go.

Several sources told us that all the product and engineering personnel were laid off in their entirety, but that’s not the case – the teams were scaled back. The social department also continues to exist, despite the cuts. And the blog is not being shut down, as some believed.

That being said, many of the creative jobs are now being handled out of Pittsburgh for strategic reasons. The technology team leadership is also going to be based there, though ModCloth will retain some of its San Francisco tech members. The primary functions of the business in L.A. will remain the same.

As we understand it, some of the laid off staff were asked to leave the company yesterday, while ModCloth is asking others to wait until mid-December to depart after much of the work for the holiday season is done. ModCloth is expecting a “multi-million dollar” profit after the 2014 holiday season said one source. (The company last year was claiming to be on track for over $100 million in annual revenue then.)

We’re also hearing that Pinterest bought ModCloth out of its lease on Brannan St. in San Francisco, and ModCloth will be moving north of Market when all is said and done. Pinterest confirmed it signed a lease at 651 Brannan, but didn’t share more details.

“While our company is still growing faster than the industry as a whole, we have been impacted by the broader downturn affecting the retail sector,” a ModCloth spokesperson told TechCrunch, when confirming the layoffs. “As a start-up, it is in our DNA to remain nimble and these cuts will allow us to return to profitability. We are confident that the difficult decisions made this week position us for a return to stronger growth in the months ahead.”

During this summer’s layoffs, ModCloth told employees how many were affected. But this time around, the company was not offering a number.

It’s possible that ModCloth was being too optimistic about the market conditions during its last round of layoffs, and didn’t cut as many people as it should have. 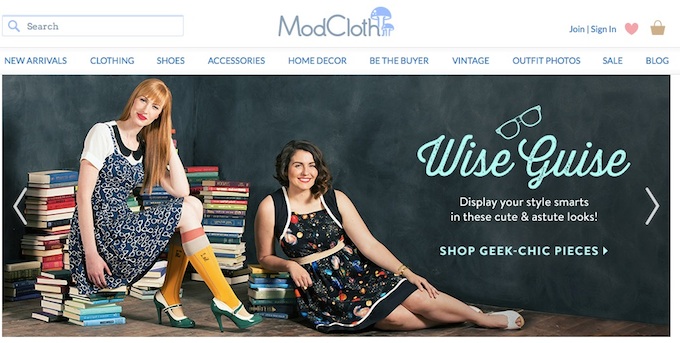 Founded in 2002 by husband-and-wife team Eric and Susan Koger, the company is known best for its vintage-inspired dresses. The team has raised over $63 million in outside funding from investors including Accel Partners, Norwest Venture Partners, Floodgate, First Round, Harrison Metal, Great Oaks VC and others.

Several people have already taken to Twitter to express regret over the news of the layoffs, and to let their friends know there will soon be a flood of talented people, including hard-to-find engineers, hitting the job market soon. Some of the tweets also confirm what we heard privately – that yesterday’s layoffs were one of two, staggered waves announced before the end of 2014.

Sad to hear about another round of layoffs at ModCloth. Lots of talented engineers, UX designers and PMs will be looking for work soon.

Pouring one out for my Modcloth peeps. Three staggered layoffs announced before the end of the year.

So much love to my friends and former colleagues at ModCloth about the layoffs. What sad, sad news and what a very talented team.

More ModCloth layoffs announced today, with more to come this year. All the feels for the great people there. :'(

So, modcloth announces massive layoffs today. Then tweets “what are you wearing to work tomorrow?” Rude? Simple mistake?