Walmart is working to ramp up its competitive stance versus Amazon and other e-commerce players, who are now offering a range of products available for next-day delivery, with the opening of two new fulfillment centers in the Eastern U.S. – one in Bethlehem, Pennsylvania and the other in Atlanta, Georgia. The centers, which are 1.2 million square feet each, will open in mid-2015 and will employ around 300 to 400 associates by mid-2016, Walmart says.

This is the second facility Walmart has in Bethlehem – it will open a 1 million square foot facility on that campus early next year.

News of the new fulfillment centers is expected to be announced today at Walmart’s scheduled analysts meeting.

The retailer is feeling the pressure of Amazon and others’ increasing advances in the e-commerce space, which is causing U.S. shoppers to cut back on trips to local Walmart stores. The retailer recently announced another quarter without growth, though at least this time around, it didn’t report declines as with the previous five quarters.

Walmart also cut its profit forecast, due to higher health care costs for employees and spending increases related to beefing up its e-commerce capacities. The new centers are part of those increases, clearly.

“With the fulfillment centers and our 4,300 stores, combined with the capabilities we have in both distribution centers and our transportation fleet – we’re trying to put all that together to give a unique experience for our customers which is everyday low-cost – which is kind of our mantra – along with offering several million customers up to next-day [delivery] depending on where they live in the United States,” says Brent Beabout, Walmart’s SVP of Supply Chain & Logistics for Global E-commerce, in an interview. 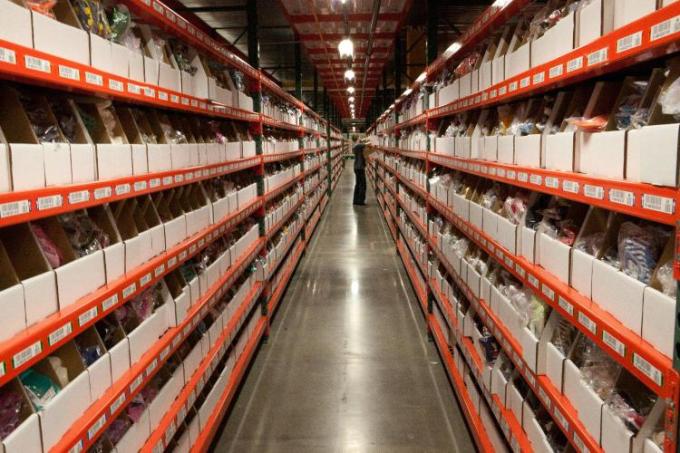 He explains that Walmart’s approach to e-commerce is more of a “portfolio” approach – that it’s working to offer delivery, next-day delivery, online orders you can pick up at the store, ship-to-store for local pickup, and it’s experimenting with curbside pickup and even same-day delivery in some locations. (Same-day is in testing in Northern Virginia, Philadelphia, Minneapolis, Denver and the San Francisco Bay area.)

Walmart is also doubling its Ship To Store capabilities, he says – something that differentiates Walmart from Amazon, which outside of some new pop-up shops in urban areas, doesn’t operate physical stores. Walmart now has more than 80 stores shipping online orders directly to customers whereas it only had around 35 stores doing so last year. Currently, more than 20% of units ordered on Walmart.com are shipped from a store.

The new centers, however, are about speeding up how quickly products can be delivered to customers in the U.S. thanks to deeper SKU selections, and at lower costs. This will help Walmart to increase its capabilities when it comes to next-day delivery.

Of course, the retailer – like many e-commerce companies – currently offers next-day delivery via overnight air packages, but this comes at a premium. The strategically placed centers will allow Walmart to offer next-day while making it more affordable for customers.

By mid next year, says Beabout, “around 65% of our population is going to have next-day service.”

Half a million SKUs will be housed in each of the new centers – around 10 times the capacity of Walmart’s standard distribution centers. But more importantly, Walmart’s goal is intelligently allocate its inventory so the centers are holding the right SKUs at the right time, reducing the ship times thanks to inventory smarts not just square footage. The software it uses for this purpose is home-grown and proprietary, built with the @WalmartLabs group out in Silicon Valley.

But with the array of options for customers who want to ship to their homes or workplaces, order online and pick-up at stores, ship to stores, and more, Walmart’s e-commerce site can be difficult to navigate. That’s changing though, the company says. It already rolled out a redesign and intelligent search thanks to @WalmartLabs acquisitions, and this week it’s rolling out improvements to its item and category pages.

Soon, it will streamline its checkout process as well. Today, checkout is 5 or 6 pages deep – definitely a longer, more tedious process when compared with Amazon’s one-click.

Walmart’s two new centers join its over 130 store distribution centers across the U.S. today, many – but not all – of which are used to fulfill online orders.