Google has done what many predicted it would, and ventured into phablet territory with the Nexus 6, its latest Android reference smartphone. The Motorola-made gadget has a 5.9-inch display, and 1440×2560 resolution, resulting in what should be an eye-popping 496 ppi pixel density. As Darrell has previously said, that seems like it could make the gadget fairly unwieldy, but Google apparently thinks it has seen the future, and the future is huge.

The Nexus 6 has a Qualcomm Snapdragon 805 processor running at 2.7Ghz to help it show off Android L (or, as it’s now known, Android “Lollipop”), the next generation of Google’s OS which makes its debut here.

A 13-megapixel camera on the back should help improve picture quality, which has never been amazing on Nexus mobile phones. The look overall is very much reminiscent of Motorola’s new Moto X, and the larger phone has buttons repositioned to the middle of the side frame to help keep things within reach (which is the same reason Apple moved the iPhone 6 Plus and 6 sleep/wake button to the side of their phone).

It’s being announced today, but pre-orders don’t start until October 29th. Actual shipments, meanwhile, are a bit more up in the air — for now, the best idea we’ve got is “in November”. It’ll ship in 32GB and 64GB varieties, and come in both white and “Midnight Blue” — a fancy way of saying dark blue.

Alas, if you were hoping for another shockingly-cheap Nexus handset… not so much, this time around. Whereas the Nexus 5 started at $349 off contract, this new addition to the lineup will start at $649. 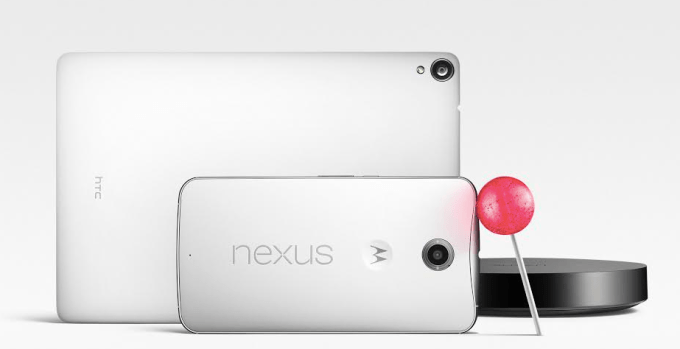