Meet Stratos, another startup aiming to disrupt the staid credit card industry by building and producing an all-in-one, connected credit card. The Michigan-based company recently announced its $5.8 million in funding and is charging forward with manufacturing.

Stratos was founded in Ann Arbor, Mich. in 2012, and the team recently shifted from R&D to preparing to launch. Production is already underway with the additional raised capital going to help the company accelerate and scale its recruiting and manufacturing.

Stratos is hardly the first to announce a connected, all-in-one credit card yet CEO Thiago Olson tells me that he doesn’t see a competitor offering the same set of features.

“We don’t think there is a comparable offering with the card and platform,” Olson said. “We’ll be unsurpassed in use of use and reliability. You want it to be accepted everywhere”

But of course he would say that.

Olson tells me the they are currently working on pin and chip integration, which if successful, could be Strato’s strongest competitive advantage.

Much like Coin before it, the Stratos card will allow owners to load their credit and loyalty cards onto the smart credit card. Yet unlike Coin Stratos purposely avoided launching on Kickstarter or seeking early press. Olson tells me that the biggest challenge is the technology involved and it’s something difficult to get right.

Olson sees Apple Pay not as a competitor but rather a solution that validates the space. He explained to me, though, that with Stratos, a person can use the card just like a credit card including using it in an ATM (unlike Apple Pay). 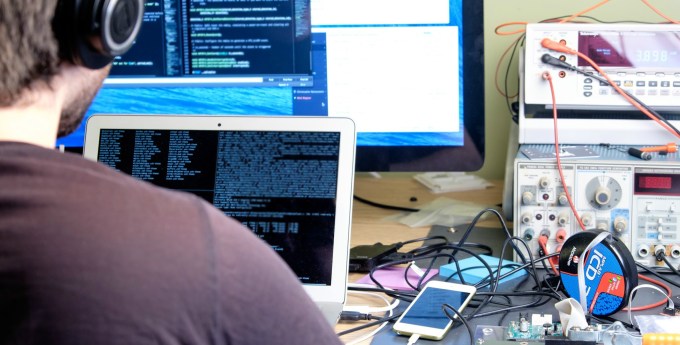 Stratos is one of the latest companies to come out of Ann Arbor. Olson was born in Michigan, and its CTO co-founded Detroit Labs. Stratos operates out of the same building that houses the hot security startup, Duo Security.

“Ann Arbor and Michigan are not your usual spot for tech startups,” Olson said. “We’re really excited to be building what will be the next great tech company right here in Ann Arbor.”

Stratos expects to launch within the next 12 months. It seems that the team is proceeding with plenty of caution and has built a lot of leeway into its timeline. While Stratos will not be alone in this space, the credit card and loyalty market is large enough for multiple players. However, the first to get to market with a working solution will have a big advantage going forward