Moonfrye, the family oriented startup best known as the company co-founded by former child star Soleil Moon Frye (aka TV’s “Punky Brewster”) has officially launched its second product, P.S. XO. Now available on the iPhone and iPad, the P.S. XO app allows consumers to take care of party planning activities directly from their mobile phone or tablet, including things like creating the invitations, sending “save the date” announcements, writing thank you cards, and more, as well as shop for party supplies, get party planning tips, and receive push notifications before and after the event.

The company says P.S. XO has been quietly live since the end of May, but only now is it discussing the product line publicly. And the iOS app itself just debuted on the App Store yesterday.

CEO Kara Nortman declined to share financials related to the new business, but noted that P.S. XO has sold to customers around the U.S., is receiving positive feedback, and is seeing “exciting” week-over-week growth.

A move into the invitation and party planning market puts Moonfrye’s latest up against a host of other startups and established companies alike, including Red Stamp, Sincerely, Paperless Post, Evite, Shutterfly/Tiny Prints, Minted, Punchbowl, and more. Several companies offer more than just the invitations, too, allowing to do all your party shopping from a single destination.

Asked what differentiated P.S. XO in this crowded market, Nortman explained that while they’re not first to market, their focus is on a solutions-based approach involving limited SKUs of high-quality products and a mobile-first user experience, combined with a mass market price point.

P.S. XO is also heavily merchandising its products via Pinterest, and views Pinterest as its home page to a large extent, she added.

In addition, she explains that online party supplies market is fragmented, but it’s also still very nascent. The largest player in the space, Party City, is a ~$1.6 billion dollar business in terms of revenue, but only does 6% of its revenue online. Oriental Trading, another large player, does hundreds of millions online.

These bigger companies are slower to adapt their experience to emerging technologies, which is why startups have a better shot here. 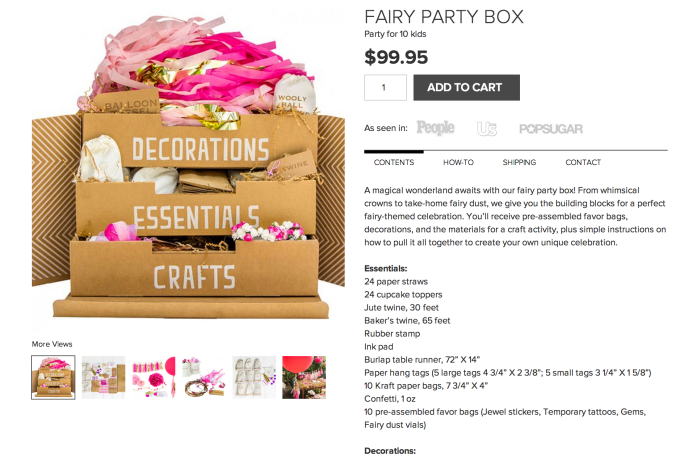 In the new mobile app out now, there are 40 cards available with more on the way. Party boxes and the boxes’ individual components can also be ordered through the app, at prices which range from $39.99 to $99.95. (Soleil Moon Frye, who sits on the board, designed many of the products for sale, but is not day-to-day.)

The app fits into Moonfrye’s larger family-focused brand, as it’s designed to appeal mainly to moms – who, because of the influence of traditional gender roles even in a society where, more often than not, both parents now work – still do most of the caregiving, including the party planning.

Nortman faced this challenge for herself, explaining, “as a working mom of three, I shop for as much as humanly possible online and find the online party shopping experience so time-consuming, this is one of the few areas that I spend many hours shopping for in the real world,” she says.

“This is also an area where people want to feel good about the way their party goes off to those attending.”

Moonfrye’s first app, also called Moonfrye is not being discontinued and will receive periodic updates. However, it’s not likely to get all that much attention given how lowly ranked it is on the App Store – it fell out of the top 200’s (Photo & Video) a year ago, ended up in the top 1000’s by early 2014, and is now so lowly ranked that App Annie doesn’t even have any ranking data on it.

P.S. XO, meanwhile, has a better shot at becoming a revenue-generating business for Moonfrye, which, to date has taken in $3.6 million in outside funding.