“We’re going to launch our first product tomorrow. Would love to show you. I hear you like keyboards.”

I was intrigued. The message was from Last co-founder Josh Williams, who I had spoken with earlier in the year but who had been largely silent about what he and his team had been working on. And now, the guy who co-founded Gowalla was telling me he and his team built a keyboard app?

The first product from Last is Goji, an emoji keyboard app that allows you to send quick text messages to friends based around various different activities, and even makes suggestions for where you can go.

Williams, of course, has always been interested in location. At Gowalla he built one of the early location-based check-in apps, which later morphed the app into a social discovery platform for places. After being acqui-hired by Facebook, he ended up working on the social network’s Location and Events products.

When we last talked to him, he and co-founder Adam Michela had just raised $2.1 million and recruited a small team to work on the project. While the team has expanded since then, the focus is still the same: finding ways to help people explore the world around them.

So it’s no surprise that discovery of nearby places is built into his new product. But the implementation is interesting, if only because most people probably don’t think of their keyboard as the tool to get new bar or restaurant suggestions.

Williams tells me Last didn’t set out to build a keyboard app, and in fact, the team’s focus has been on the back end technology that actually makes Goji work. But after seeing the iOS 8 preview over the summer and learning about new functionalities around extensions and keyboards that would be available on iPhones for the first time, they thought it would be cool to do something just a little bit different with that technology. 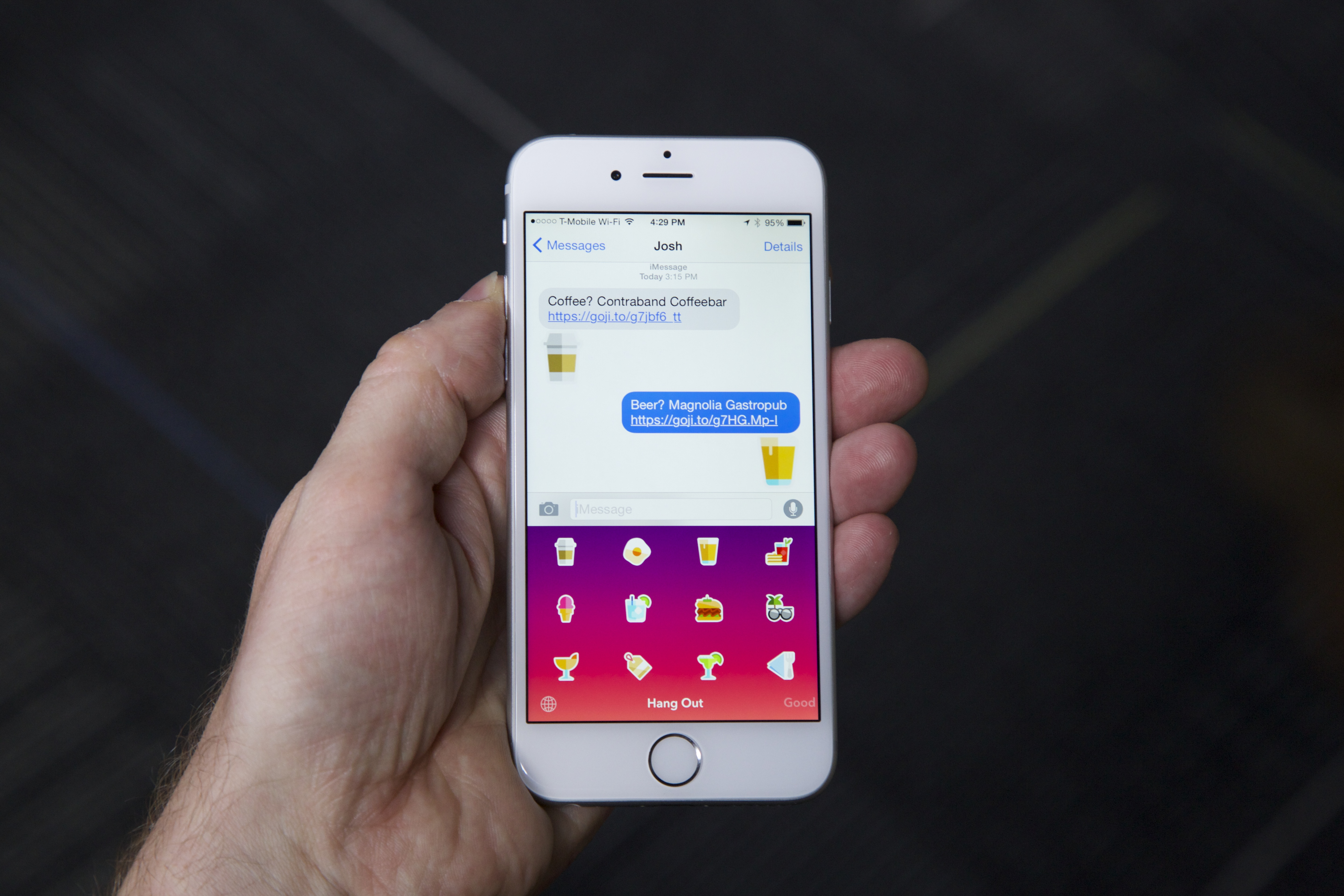 After all, they reasoned, most people use text messages to plan what they’re doing with friends. Why not make it easier and a little bit more fun to do so? So the team spent the last five or six weeks building what is now Goji.

Goji can be used as a standalone app for surfacing different types of activities, whether it be to “hang out,” “get outside,” or have a “night out” with friends. Each screen has a grouping of custom emoji to denote those activities, such as going to a wine bar, heading to the park, shooting pool, or grabbing a burger together.

The app takes into account the context of the time of day, where users are located, and makes a small number curated suggestions based on that information. Currently it works in the San Francisco Bay Area, Los Angeles, Portland, Austin, Brooklyn, and Manhattan, but the team is hoping to add more cities over time.

Click on any of those images, and you get suggestions for nearby venues that feature any of those activities. Once you choose a location, you can then copy to keyboard, send via text, or share with friends via Facebook, Twitter, or other social channels. The message recipient simply gets the suggestion — “Beer?” or “Coffee?” — as well as a link to see more information about the venue.

In addition to the standalone app, Goji can also be used as a custom keyboard. That enables users to have the same functionality, but built directly within their SMS interface.

Williams says Goji was built on top of technology the team had already been working on. As a result, it isn’t the only thing you can expect to come out of Last… It’s merely the first interface for surfacing interesting nearby locations to users.

It’ll be interesting to see what other types of apps the team tries to tackle — after all, if they can make suggestions for a brewpub directly within your SMS field, what else could they do with that information?