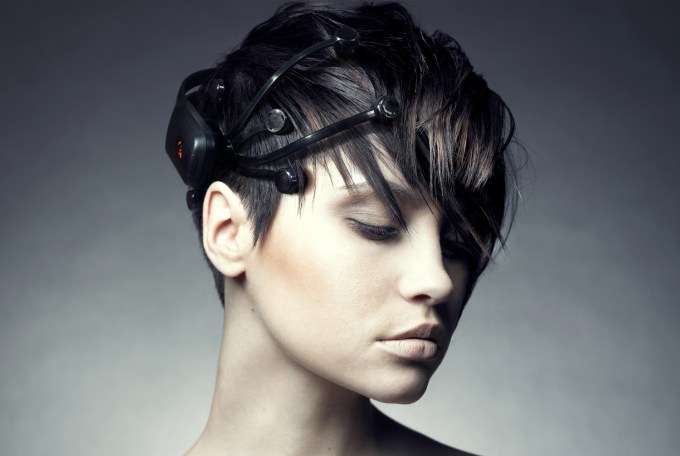 This is an Emotiv headset, but we expect Thync’s final product to have a similar form factor.

Coffee, exercise, yoga, drugs — these are the ways people traditionally think to alter their mood when looking to get a bit more energy during the day or to calm their thoughts as they transition into the evening. Thync is a startup looking to give consumers another avenue to change their mental state, one which doesn’t involve significantly altering your daily habits or metabolizing substances which may or may not have negative side effects.

For three years, Thync’s founders have been working to combine advancements in neuroscience with consumer product insight to create a gadget that people can put on for a few minutes, feel a noticeable difference in mood, and take off until the next time they need a boost. Using a combination of ultrasound and electricity applied to specific parts of the brain, the startup says it’ll be able to induce strong feelings of energy or calmness.

While it’s not yet ready to show off the gadget publicly, it seems investors like what they’ve seen: so far, Thync has raised $13 million in funding, the bulk of which coming from Khosla Ventures.

When I heard the pitch for Thync, I immediately thought of those bracelets sold at the mall and in late-night TV infomercials, promising to realign your chakras and promote positive energy by affecting your ions or some other unsubstantiated blather. The fact that Thync wasn’t willing to show us an early product despite the fact that their device is slated for release next year certainly didn’t help with that feeling. But if there were a time for such a headset to come out, it does seem like we’re approaching it — gadgets like the Emotiv headset (pictured above — we assume Thync’s gadget will also be a headset) show that the technology to interact with your brain is making its way out of labs and into devices you can actually buy.