At Disrupt NYC earlier this year a TC colleague walked past the table where I was sitting and clocked my MacBook Air, with its patch of dog-eared masking tape covering the webcam, and said: “Wow, you’re so paranoid!” I quipped that Europeans generally are.

But in the digital sphere these days it pays to be paranoid. So covering a webcam is a reasonable security precaution — against hackers or even overreaching government surveillance programs.

If it’s connected it can be hacked. So the only way to be sure your hardware is not enabling a remote Peeping Tom is to physically cover the lens. Hence folk reaching for the reassuring certainty of masking tape.

But of course tape is not a pleasing fix to stick on your electronics. If you do need to use the webcam you have to peel off the tape, which takes times and can leave a gunky mess behind. It’s also not exactly convenient to be peeling tape off and sticking it back on regularly.

So enter Nope: a neat fix that protects your privacy from any lurking digital voyeurists by covering your webcam with a convenient swiveling shutter that also won’t make you look like you belong to the tin-foil hat brigade — thanks to its minimalist, non intrusive, magnetic design.

It basically consists of two parts: a metal circle that affixes (yes with tape) to your computer or laptop. And a second metal disk that attaches to the first via a low powered magnet so it’s held in place just above the screen (to avoid scratching it). This construction means one disk can be swiveled to cover or reveal your webcam. Simples. 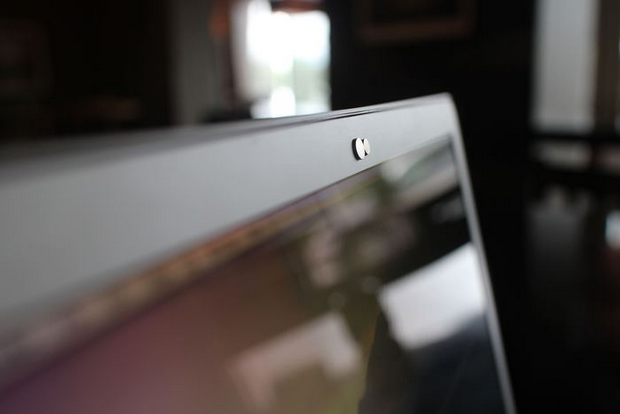 Nope is currently raising crowdfunds on Kickstarter. Indeed its makers were only looking to raise $500 but have pulled in almost $35,000 so far, with another 41 days left of their campaign. A $5 Kickstarter pledge bags you two Nopes.

There are three sizes to choose from at present: the largest Nope is 0.8mm thin, with both connected disks measuring a total of 11mm across; there’s also a smaller Nope Mini (9.5mm across) or the Nope Micro (7.5mm across) — the latter two are designed for use on smaller laptops, tablets or even smartphones. Although the magnetic fixture means it’s not suitable for all phones. Notably its makers say the iPhone 6 Plus’s optical image stabilization could be affected by the magnetism.

Nopes are designed to be thin enough to remain in situ when you close a laptop lid, for instance. Obviously they have small moving parts so are not as immediately suitable for use on smaller portables as they risk being lost or knocked off in the rough and tumble of your bag/pocket. But if you want something neat and tidy to cover the webcam on a desk-based machine or a family tablet that mostly stays in the lounge, Nope looks pretty dope.

Nopes are due to be shipped to Kickstarter backers this December — all 3,383 of them (and counting).