Ruthe Farmer Contributor
Ruthe Farmer is the founder and CEO of the Last Mile Education Fund, and a global advocate and evangelist for equity and inclusion in technology and engineering.
More posts by this contributor

On September 20, UN Women announced the HeForShe campaign, an effort to invite men and boys to join in advocating for gender equality. Actress and UN Women Ambassador Emma Watson of Harry Potter fame gave a moving speech to launch the campaign, which has been met with both cheers and criticism from the media.

When it comes to the hotly debated issue of women in technology, male advocates are particularly important. Female role models are often cited as one of the major issues to address for women in tech – the “you can’t be what you can’t see mantra” – but expecting the minority group to do all the outreach and mentoring to increase their own participation is a losing proposition. Men make up 74 percent of the tech workforce while only 24 percent of CIO positions at Fortune 100 companies were held by women [PDF] in 2012.

The fact is, we all make and inhabit the culture of our industry, and we all need to participate in fixing it. Men are an essential part of the solution. According to research from the National Center for Women & Information Technology (NCWIT), “Men are often the leaders, power holders, and gatekeepers in the computing workplace. Enlisting men’s participation is vital for change efforts to be truly effective.”

Fortunately, men who invest their time and energy in women in tech are not in short supply. Known figures like venture capitalist Brad Feld, author and futurist Vivek Wadwha, entrepreneur Anil Dash, Indiana University Dean of Informatics Bobby Schnabel, AT&T President – Technology Development Thaddeus Arroyo and Congressman Jared Polis have spoken out as advocates for women in tech. Even the new CEO of GoDaddy is speaking out on this issue. The point is, male advocates for technical women are out there — far more than I can name in this article — but here are 10 men working to get and keep more women in tech.

Seth Reichelson teaches computer science at Lake Brantley High School outside Orlando and in four short years has built the program into one of the largest in the nation while achieving 40 percent participation of girls in his classes. He actively recruits students into computing and infiltrates female-dominated classes like interior and graphic design to make sure girls are included.

In 2013 he was recognized as a White House Champion of Change for Tech Inclusion where he humorously asserted, “Anyone can learn computer science. I’ll teach everyone in this room. Dare me.” Here he is in action at the 2012 NCWIT Summit.

In 2009, behavioral scientist Matt Wallaert was Head of Product at the personal finance website Thrive. He was comparing the savings rate of men and women and discovered that women were saving a significantly higher percentage of their paycheck each month, yet they were falling far behind men in actual dollars saved because of the gender wage gap.

Impassioned, Wallaert led a group of engineers to create GetRaised.com, a free service that helps women figure out if they are underpaid and what to do about it. “It is easy to say, as a man, that you are for equality for women,” says Wallaert, “because you are often speaking from a position of privilege. But we need to do more than just talk about equity: we need to use that position of privilege to actively create opportunities for all. The greatest use of power is the empowerment of others.”

A University of Arkansas defensive back turned management information systems professional, Bradford leads the Information Technology Research Institute (ITRI) at the Walton College of Business. He organizes the Institute’s annual Women in Technology Conference, now in its 11th year, and with his football player build is clearly visible as one of the only men in the room at that event. It doesn’t faze him one bit. He also organizes annual statewide events to educate girls about technology careers, pulling in high-profile speakers like Walmart CIO Karenann Terrell to inspire the students; hosts the Arkansas and NE Oklahoma Aspirations Award for high school girls; and is the University of Arkansas representative to NCWIT.

Complete with an aging Volvo wagon and a signature beard, McDowell is the picture of a UC Santa Cruz professor. He’s also a tireless advocate for women in tech at UCSC, across California and nationwide – usually quietly behind the scenes. 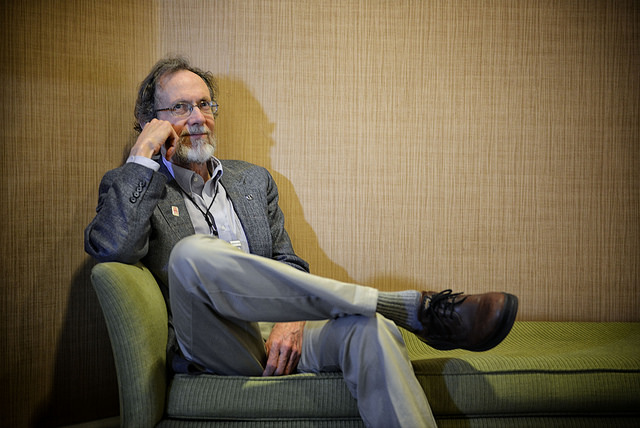 Locally he organizes the annual Bay Area Aspirations Awards, which recognizes 50 technical high school girls with a gala event at the San Jose Tech museum. He has established a $16,000 scholarship for women in computer science at UCSC and facilitated many other California schools following suit. Nationally he co-chairs the Academic Alliance of NCWIT, an alliance of more than 350 universities, and serves on multiple project teams working to advance the participation of women in undergraduate computer science programs.

A former software engineer, Schanzer left the tech industry to become a public school teacher. He identified lack of success in algebra as one of the key factors holding students back from STEM fields, and inhibiting schools from bringing computer science to their students. In 2006, Emmanuel created  Bootstrap, a curriculum and software platform that enables students to build their own video games using pure algebraic and geometric concepts and a functional programming language. Bootstrap has incorporated many known best-practices for engaging young women in computer science, building teamwork, relationship-building and real-word application into every aspect of the curriculum. “This approach means all the girls and underrepresented students get the chance to feel successful with computer programming, not just the students who sign up for the programming electives” says Schanzer, “it’s about equity.”

It is more efficient to list the efforts Joe is not involved in, than those he is. An educator and advocate for computer science for all, Joe is engaged in nearly every computing education initiative in Wisconsin and many nationwide. Despite ‘retiring’ in 2004, Joe continues to serve as the Co-chair of the Advisory Board for Washington HS of IT and the Computational Thinking Task Force for the Computer Science Teachers Association. He founded the Wisconsin Award for Aspirations in Computing and has grown the program from five to 24 awardees since 2012. Joe is a fixture at every major technology education event and provides much needed cross-organizational knowledge transfer in the community.

In the fall of 2013, Jeffrey joined Apple as Director of Worldwide Inclusion & Diversity.  On his work at Apple, Jeffrey says, “Everyone has a role in making diversity matter.  At Apple we know that inclusion inspires innovation, and all of us — both men and women — can and should find ways to inspire women and girls to pursue and stick with studies and careers in technology. The innovation that their perspectives bring make us stronger and our products better. I’m proud to be one of many leaders at Apple who are actively working to make a difference for women in tech or who are just beginning to think about their career goals.” 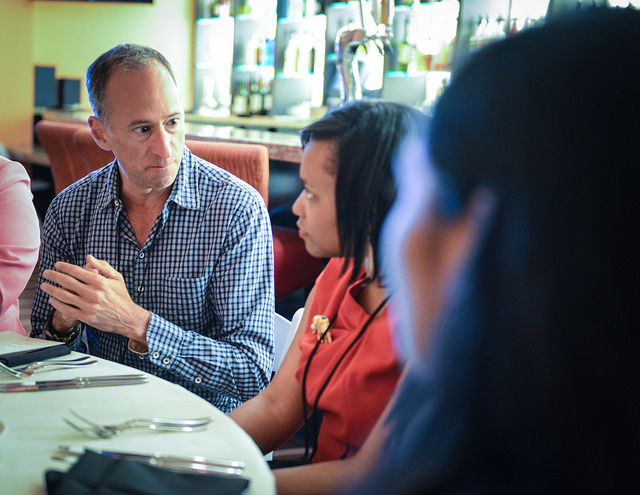 Whether it’s personally connecting with students — like current Apple intern Khalia Braswell, a 2013 UNC-Charlotte IT grad student who is also a DJ and radio personality — helping to launch internal efforts like Women@Apple-Tech, showcasing the work of amazing educators like Leslie Aaronson of L.A.’s Foshay Learning Center as part of an ongoing internal discussion about inclusion and diversity, or simply being visibly engaged and intentional as an advocate for inclusion in the workplace, Jeffrey walks the walk to demonstrate that “we all do better not in spite of our differences, but because of them.”

As an African American adopted by a white family from Maine, Dr. Solomon knows what it means to feel like a fish out of water.  He has dedicated his career to combatting inequities in urban education systems and helping at-risk minorities and young women arrive at college with the math, literacy and cultural competency skills to compete.  Both a social scientist and an educator, he strives to create holistic academic support environments for at-risk students and help school districts improve college and career readiness for all their students. “This is especially important in STEM fields,” claims Solomon. “If a low income student enters college needing remedial math courses, that puts them off the 4 year graduation schedule covered by financial aid and tracks them out of STEM majors.  This is a cost to innovation we simply can’t afford.”

Just a short drive from Silicon Valley, but worlds apart in terms of industries, Jacob Martinez has spent 11 years building the next generation of Latinas in tech through the Watsonville TEC (Tecnología-Educación-Comunidad)project. 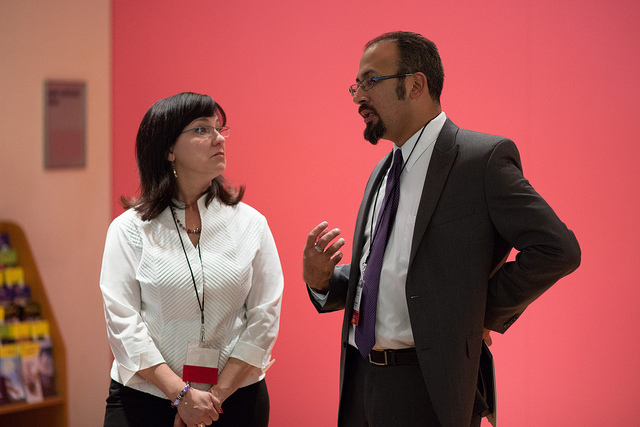 He has been successful in inspiring Latinas from this farming community to move into post secondary education and careers in the tech, with many of his students receiving awards and scholarships. He is the author of multiple publications on engaging Latinas in technology careers. His latest project, Digital NEST, will be a hip work/makerspace where young people can come together to learn skills, innovate, and create their futures. “All these kids were motivated to get into tech, but they didn’t have access,” Martinez said. “I always thought to myself, ‘What would the outcome be like if they had the access?'”

Seven years ago, while doing research for a book on computer science, Smith was awakened to the intrinsic relationship between diverse perspectives and quality software.  An engineering director at Microsoft, he began a journey to help the company build well-balanced teams, including co-authoring a paper on generational diversity and participating in a White House discussion on women in STEM fields. Since then he has served on the Women of Skype Steering Committee and the Office Diversity leadership team, and recently became part of the Anita Borg Institute Organizational Change Initiatives working council. “We have a tremendous opportunity to build technology that expands our human potential.” says Smith, “and building a climate of trust within talented and diverse teams helps improve the quality of our software as well as the quality of life.”