Term of the deal are not being disclosed. Combined, WeatherSphere’s apps saw a total of 3 million users.

WeatherSphere founder and CEO Raghav Gupta tells us that he will continue to lead and now grow the team of six in Mountain View, expanding the WeatherSphere brand and apps.

Scripps, which hosts a portfolio of TV, print and digital media brands was interested in the WeatherSphere properties because it understands that today’s consumers aren’t necessarily turning to TV stations anymore to get their weather news – even during emergencies.

WeatherSphere has quite a bit of experience serving a user base that looks to mobile apps and alerts when faced with bad weather and storms. In fact, Gupta told us last year, the idea to develop the WeatherSphere brand full-time came after deadly tornadoes hit Joplin, Missouri in 2011.

One of the apps he was working on at the time alerted users to nearby bad weather, and the app was all of a sudden hit with a surge of downloads from those looking to get real-time information about the location of the tornadoes.

He increased the price of the app to $4.99 to save the servers from the load, and a business was born. 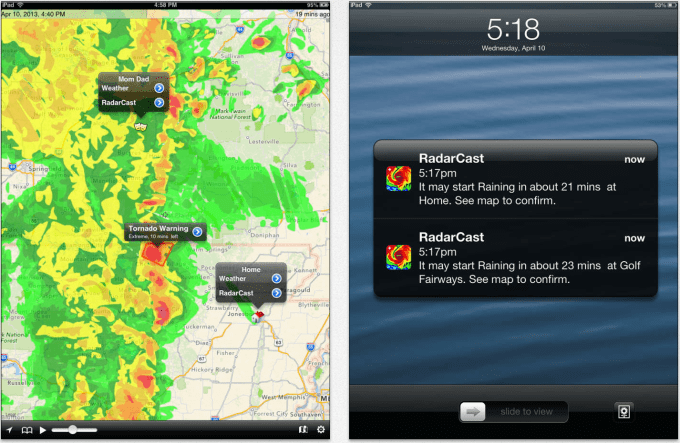 “I began to research this further, and found that no one in Silicon Valley is looking at the weather space from a technology point of view,” Gupta explained of his move into the weather app business.

In the years since, the company has developed a suite of applications including Hi-Def Radar, RadarCast, LightningCast, and Snow Forecast, as well as apps aimed at outdoor enthusiasts which let them monitor weather as it relates to hunting, fishing, ocean sports (via a Tides app), and more. The apps not only inform you of weather patterns and events in real-time, they can also be used for more practical concerns – for example, a “TurnCast” feature in RadarCast can navigate you around heavy storms so you don’t get stuck on highways due to heavy snowfall.

The majority the apps are paid, and as noted above, maintain consistent positions in the App Store’s Top Paid and Top Grossing charts. Last year, Gupta told us the apps were profitable and the company had turned down funding requests from VCs. That remains the case, which begs the question, “why sell?”

“The main reasons for selling are that Scripps will invest more in the business and help grow the team in Mountain View,” says Gupta. “And, it being a media company, will provide us the marketing and visibility boost that will significantly enhance the WeatherSphere brand in a short amount of time.”