Facebook Messenger is all set up to allow friends to send each other money. All Facebook has to do is turn on the feature, according to screenshots and video taken using iOS app exploration developer tool Cycript by Stanford computer science student Andrew Aude.

Messenger’s payment option lets users send money in a message similar to how they can send a photo. Users can add a debit card in Messenger, or use one they already have on file with Facebook. An in-app pincode also exists for added security around payments. 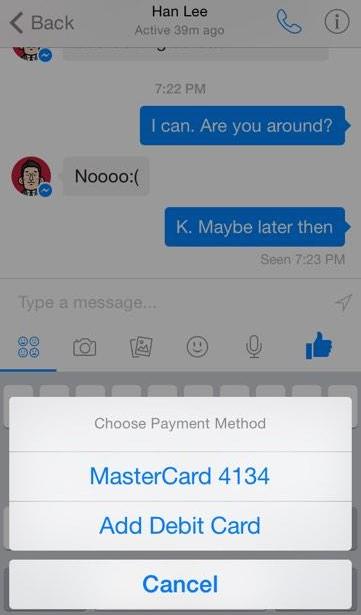 It’s unclear whether Facebook will monetize Messenger by charging a small fee for money transfers, or offer the functionality for free to drive usage of its standalone chat app. That will be up to David Marcus, the new head of Messenger who was formerly the president of PayPal.

Facebook CEO Mark Zuckerberg said on the company’s Q2 earnings call that “over time there will be some overlap between [Messenger] and payments. […] The payments piece will be a part of what will help drive the overall success and help people share with each other and interact with businesses.” However, he urged Wall Street not to get too foamy at the mouth because it may be awhile since “there’s so much groundwork for us to do.”

He urged analysts and investors to revise their estimates of Facebook’s revenue if they expected this to come quickly. “To the extent that your models or anything reflect that we might be doing that, I strongly encourage you to adjust that, because we’re not going to. We’re going to take the time to do this in the way that is going to be right over multiple years” Zuckerberg concluded.

The presence of payments code in Messenger was first discovered by security researcher Jonathan Zdziarski last month. Aude tells me he used Cycrypt to dig into the Messenger for iOS code on his jailbroken iPhone and turn on the payments feature to nab the screenshots and video. I contacted the company to inquire about Messenger payments. Facebook declined to comment.

Aude played around the with feature and its code. He tells me you simply hit a button to initiate a payment, enter the amount you want to send, and send it. Facebook keeps the transaction private and doesn’t publish anything about it to the News Feed.

In the version Aude investigated, Messenger payments only worked with debit cards, not credit cards or bank accounts. That’s likely because money transfers are cheaper to process when they come from debit cards and don’t require approvals or numbers some people don’t know off-hand like connecting a bank account. Aude speculates that “based on my understanding of the debit interchange rates, each transaction will cost Facebook roughly $0.40 to $0.50 (Durbin swipe fee + ACH fee). The app didn’t mention a fee to send, so it’s probably free, at least initially. Over time they might add a $1 fee.” This can’t be confirmed, though.

Aude didn’t see PayPal as a payment option in Messenger, though there are notes about PayPal in the code unearthed by Aude. Facebook automatically lists payment methods you’ve set up in its main app to pay for games or ads. 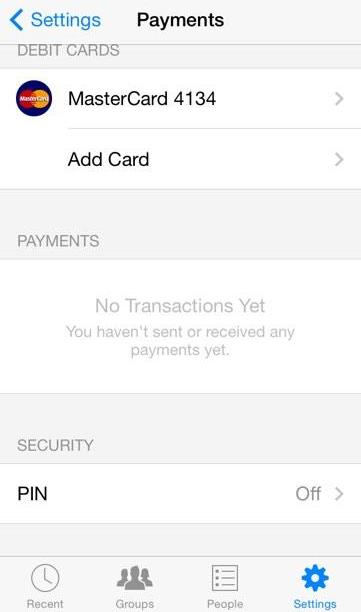 As for how the money is actually transferred, Aude tells me that “The mechanism it uses is to debit one account, and then use some magical means to lookup the bank account number of the recipient and ACH [Automated Clearing House] deposit it, Identical to Square Cash.”

Aude tells me he thinks Facebook will enable the feature in the US in the next few months, and then eventually in other parts of the world, though this code might be just for the early stages of internal testing of the payments feature. It could be a while before the public gets access. One day, however, Facebook might be able to challenge the remittance industry that charges foreign workers exorbitant fees sometimes in the 10% to 20% range to send money home to their families.

There’s a global battle for messaging going on right now between Facebook/WhatsApp, Apple iMessage, Tencent’s WeChat, Line, KakaoTalk, Google Hangouts, Kik, Rakuten’s Viber, and others. Each is trying to differentiate itself, sometimes with stickers, games, commerce, or social networking.

If Messenger payments is a success, it could create a whole new reason to choose Facebook’s chat app over everyone else’s. Paying friends might be something you only do a few times a month or less, so having a standalone app for it might not make sense. Facebook clearly hopes bundling it into an app people use everyday could help it beat dedicated apps like Venmo.

Plus, beyond peer-to peer-payments, the feature could build Facebook’s collection of debit card numbers and other payment methods. Those could be very useful, as Facebook’s also working on a Buy button for making ecommerce purchases straight from the News Feed.