A broad group of protesters representing various San Francisco housing interests met on the steps of City Hall today to express their opposition of proposed legislation that would allow residents to rent out their homes on a short-term basis.

“Raise of hands, who here has shared their home?” asked Fernando Marti, the co-director at Council of Community Housing Organizations (CCHO). “This is a city of home sharers. Today we have a piece of legislation about home sharing that is destroying our city and home sharing,” he boomed on the steps in the sweltering October heat.

The proposal, which is sometimes called the “Airbnb law” due to the company’s platform for renting out homes on a short-term basis, would give residents a 90 day cap on rentals when no host is present. The coalition believes this proposal would only serve to legitimize a platform they believe would make housing even more scarce and further drive up costs.

An SF Chronicle study earlier this year found property owners had turned two-thirds of the nearly 5000 homes listed on Airbnb into year round hotels rather than offering them to permanent residents. 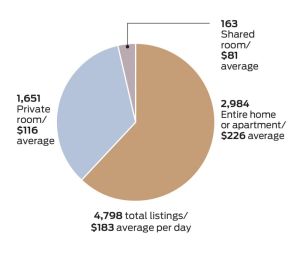 President David Chiu and the San Francisco Board of Supervisors met a few weeks back to tweak some of the proposed legislation but those tweaks still don’t cut it for the coalition.

“We do not support the legislation in its current form. The very profitable industry of short-term rentals presents the very real risk of continuing to erode the City’s housing stock for permanent residents and continuing to drive up housing prices,” says a combined letter being sent to Chiu and the Board of Supervisors. The letter recommends three core changes:

The next meeting for the San Francisco Board of Supervisors will be this Tues, Oct 7. There will not be a chance for any resident hearings at the meeting, but the coalition encourages those concerned to make their voices heard via email to their neighborhood supervisor.