Apparently, navel-gazing about how much time you’re spending on your phone is a thing now. We’ve already seen iOS apps like Moment and Check appear to shame you into self-restraint by alerting you to how many minutes you spend staring at your little screen every day, or how many times per day you pull out your phone and take a look. Now, it’s Android’s turn. A new app called Offtime, however, takes things a step further – it doesn’t just identify your bad habits, it also helps you break them.

Based in Berlin, the idea for the app comes from a psychologist, now Offtime CEO, Alexander Steinhart, and has been built in collaboration with the Humboldt University of Berlin, plus co-founder and designer Michael Dettbarn. The team is funded with governmental EXIST funding, but is planning a Series A round for later this year, or early 2015.

Why the funding? Because unlike its earlier competitors, Offtime thinks it may have stumbled upon a business model. Its goal is to sell a white-label version of the app to partners, like businesses who want to demonstrate they care about their employees’ work/life balance.

At least one licensing partner is poised to launch in November, but Offtime isn’t yet permitted to disclose the names of those licensing its technology.

The app is designed to let you unplug without missing urgent matters. It lets you whitelist contacts who able to pierce through your downtime, like your spouse or children, but otherwise shuts down apps, calls, texts, and emails. It can also auto-respond to incoming messages on your behalf, while maintaining a careful activity log of everything you missed while away so you can quickly catch up.

Offtime also provides similar insights about your usage of your phone, as its predecessors did, charting out hours spent on the device, and even detailing which individual apps are the largest time-sucks.

And while in Offline mode, the app is smart enough to identify certain patterns – like someone who dials you six times in a row probably has an emergency and needs to get through.

A study at Humboldt University found that users were “unlocking” their phones 63 times per day. After using the app, that number declines – users unplugged for at least two hours per day, the study found.

Attempting to sell this app to companies is an interesting path for Offtime to pursue, especially because changing employees’ mentality around work/life balance is something that really needs to come from the top down.

Though companies will often say all the right things when it comes to this topic, employees still feel pressured to work at off times for a variety of reasons.

One, because their higher-ups do, starting discussions and responding to emails after-hours, and scheduling meetings that eat into personal time. But also because many companies’ cultures are infused with “work ’till you drop” spirit – it’s so bad in some places that new hires are being offered “pre-vacations,” Slate recently reported. In other words, employees are asked to take a vacation before they start, because employers know they won’t be encouraging staff to do so afterwards. 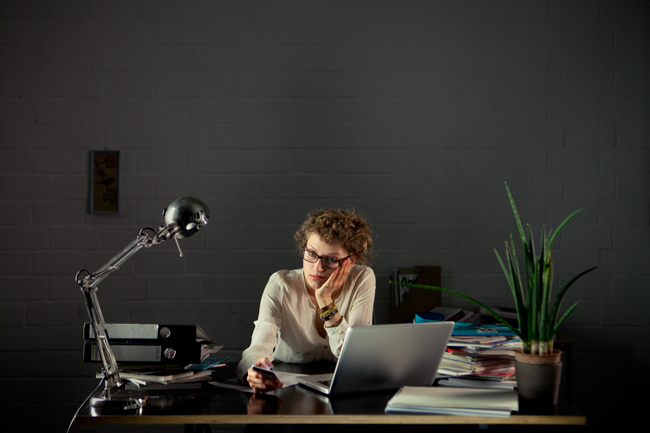 Americans, the Slate article noted, leave over 500 million vacation days on the table each year, as they take only half the time they’re entitled to.

In addition, with the recession and high unemployment rates, employees often worry about taking breaks, concerned they’ll be seen as expendable for doing so.

Meanwhile, culturally, we’re often sent messages that promote work as more valuable than personal life. Take for example, “Lean In”: those in positions of power that afford them with easy access to things like round-the-clock child care encourage others who want to back down from taking on more responsibilities at work to stop doing so. The undercurrent of the message is that somehow, it’s women who are unconsciously sabotaging themselves, not the corporate culture and policies that undermine a balanced life. (In theory, those things would change if only more women could climb to the top!)

But even unlimited personal funds can’t solve this problem. After all, if Gwyneth Paltrow can’t balance career and personal life, who can?

Solving the work/life problem is too big a challenge to put a small app from Berlin, which won’t even be able to work in the same way on the iPhone due to Apple’s policies.

But can we at least applaud them for trying?