Your photos are boring. Doublie can fix that. The app lets you add any of 10,000 stickers and celebrity cut-outs to your pics so you can fake a selfie with Beyoncé, get a kiss from Obama, or have Miley twerking in the background. You can even make your own stickers of your face or anything else, paste them to a photo, and share them to SMS, Facebook, or anywhere.

Doublie isn’t trying to reinvent Instagram. It doesn’t have its own feed. Instead it wants to make our pics sillier and more unique, no matter where we post them. That might seem frivolous, but were rapidly reaching photo sharing fatigue because everything looks the same. The first phase of mobile self-expression was snapping pictures indiscriminately. Then came filters, selfies, and videos. Doublie is betting the next phase is augmenting our photos with LOL-worthy fantasy and special effects. 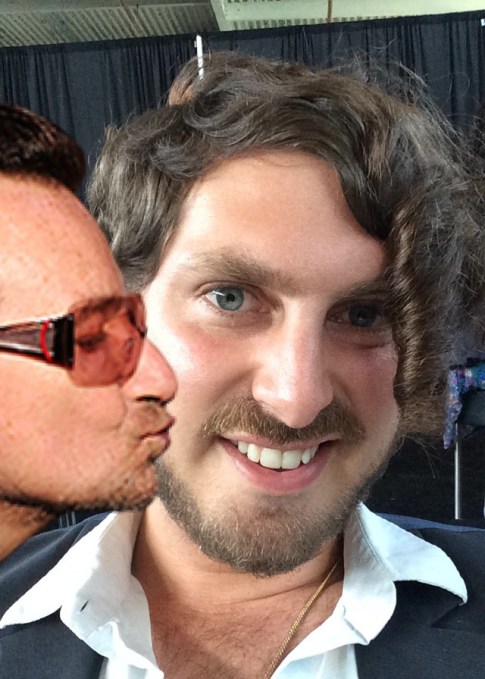 Bono loves me, even though I think his new album is garbage

Da Fuq Is A Doublie? 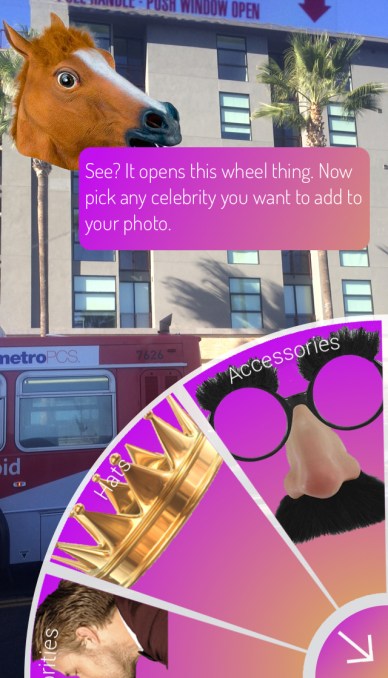 That’s actually what Doublie’s first App Store screenshot says. If it wasn’t obvious, this isn’t your dad’s photo app. The whole thing is filled with ridiculous little flourishes, starting with the tour of the app being led by Kanye West wearing a horse head.

Basically, you open the Doublie iOS app take or upload a photo, then tap the flyout wheel in the bottom right to choose from a wide array of categories full of themed stickers to slap atop your pic. There are celebrities ranging from Michael Jackson and Leonardo DiCaprio to Justin Bieber and…Steve Jobs. Some are cut outs of them kissing the air, so if you want to look like you’re getting a smooch from Ryan Gosling or Angelina Jolie, Doublie can make your fantasy come true.

There’s also categories of accessories like sunglasses and Batman masks, superpowers like laser eye blasts and Wolverine claws, and Mike Tyson’s face tattoos that you can use to jazz up your mug. Or if you hate your face, you can cover it with a lion head, or distract people with Grumpy Cat or Boo. There’s even a whole “Tech Bro” section so you can add Google Glass, a drone, don a hoodie, or outfit yourself like a venture capitalist, which apparently means a fleece vest and khakis. There’s a ton of options, but an upcoming search feature will make it easier to find the perfect image without endlessly spinning through the wheel.

If none of the pre-made stickers suit you, you can also cut out your own, similar to the Imoji app. Trim off the background and color in what you want to keep with Doublie’s relatively easy tool. Once you pick or make a sticker, you can resize it, move it around, and paste it into your photo. Then you can share it with SMS, Facebook, Instagram, Twitter, or Snapchat. 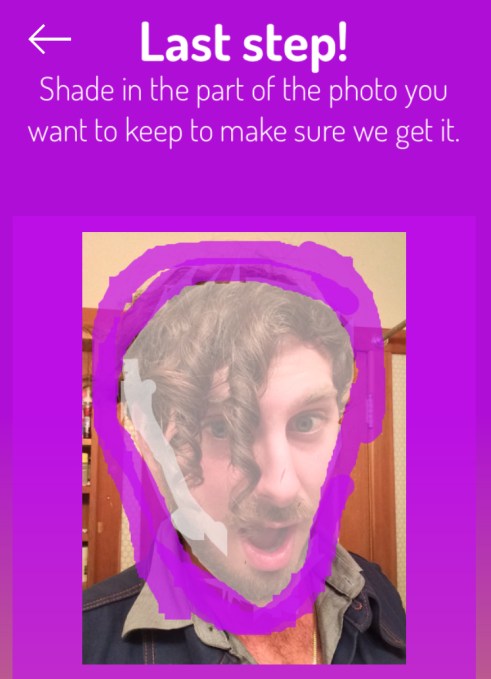 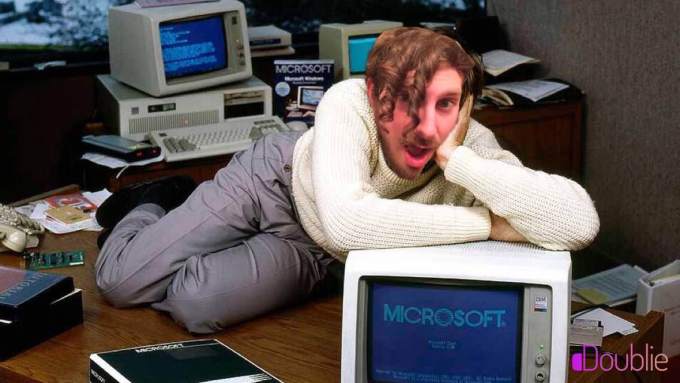 Did y’all know I invented Microsoft?

Photo and messaging companion apps are blowing up right now, so Doublie will have to fend of Imoji, Studio, AddMeIn, PicCollage, and more apps for making stickers.

A Meme Generator, Starring You 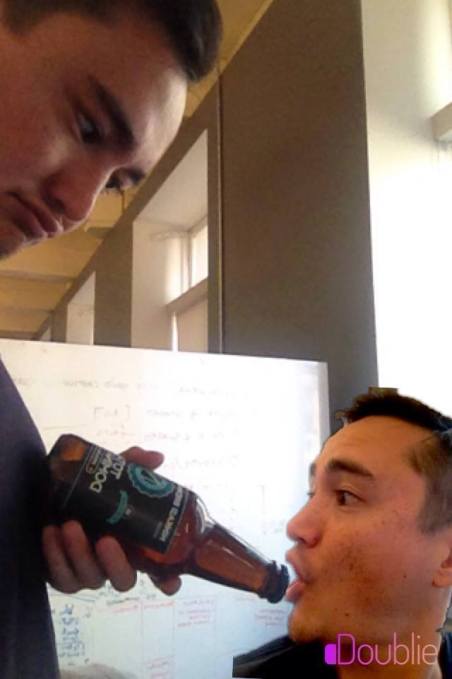 Founder Shane Walker hazes himself thanks to the magic of Doublie

Doublie was dreamed up by Shane Walker [Disclosure: Shane is a friend from college], who previously sold his social app publishing company SocialWeekend to Adknowledge. Taking a scientist’s approach this time around, Walker worked through a bunch of ideas and prototypes until he found something overflowing with virality. Walker and his team went down to the train station and showed teenagers mockups of news readers and geolocation apps, but it was Doublie that kids called “dope as hell.”

After a few months, the 5-person, mostly Stanford-bred team had turned Doublie into a real app and secured incubation from Founders Den plus funding from Great Oaks, Tandem, Chasm, Tenoneten, Leviathan, and a few more angels. With a stint at #1 on Product Hunt and solid organic growth, it’s raising some more money now. Following in the footsteps of Line and KakaoTalk, Doublie plans to earn revenue with a premium sticker store.

Walker calls Doublie “A real-time meme generator for your phone” that breaks the 1% rule of the Internet, which dictates that just 1% of users create the content consumed by everyone else. While Instagram did that by creating a camera phone social network, Doublie knows you don’t need another place to share, you need more captivating things to share, so it focused on remixing. Walker likens it to the Photoshop battle subreddit, saying “We’re making it easy to be funny.”

Doublie is available for free on iOS 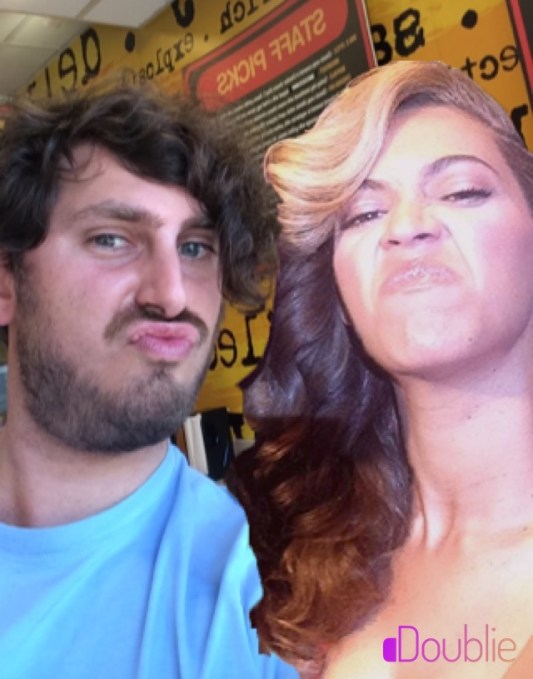 Getting fierce with Queen Bey