Apple doesn’t care for apps that let you launch other apps directly from the Notification Center, and has pulled one of the first apps to take advantage of this new functionality now available in iOS 8 from the iTunes App Store. We took a look at Launcher, the app in question, last week, and found it to be a convenient and clever way to access your favorite apps or common actions (like texting a friend, placing a call, etc.) without having to swipe through your homescreens or tap multiple times.

Unfortunately, Launcher only had a handful of days in the App Store before it was pulled down on Friday, September 26th. Apple, seemingly, has made a unilateral decision to not allow these types of applications in the App Store, the developer claims. The move to veto the first of these apps will now set the tone for those who would have followed – including, perhaps, the forthcoming app from a team at this year’s TechCrunch Disrupt SF hackathon, who created a prototype app with similar functionality they called Blitz, which won runner-up. Though it wasn’t complete by the time the hackathon wrapped, the group said at the time they may continue to work on the app in their spare time.

Nearly 300,000 users over the course of nine days downloaded Launcher, he says  – good numbers for a brand-new app of any kind which hasn’t yet begun to do serious marketing or paid user acquisition.

Gardner explains in more detail via a post on his website, that Apple said that launcher apps like his were a “misuse of widgets,” and made the decision to pull the app down even though there are no written rules that state launcher apps cannot exist. He also says he attempted submitting a fix which would redirect users who tap on the Launcher widget first to the Launcher app itself, then to the target app. Apple rejected the fix within an hour on Friday, and then pulled Launcher from the App Store.

If you downloaded the app last week, you can still use it, but you can no longer upgrade to the Pro (ad-free) version, and several bugs will no go unfixed. Users are pretty upset about the app’s removal, adds the creator, noting that he has now set up an online petition that will allow them to register those complaints in a more official format. (On a mile-long thread on Reddit, users are telling each other to tweet to Apple’s CEO Tim Cook, or submit feedback via a form designed for giving feedback about the iPhone. Neither of these are great ideas.) 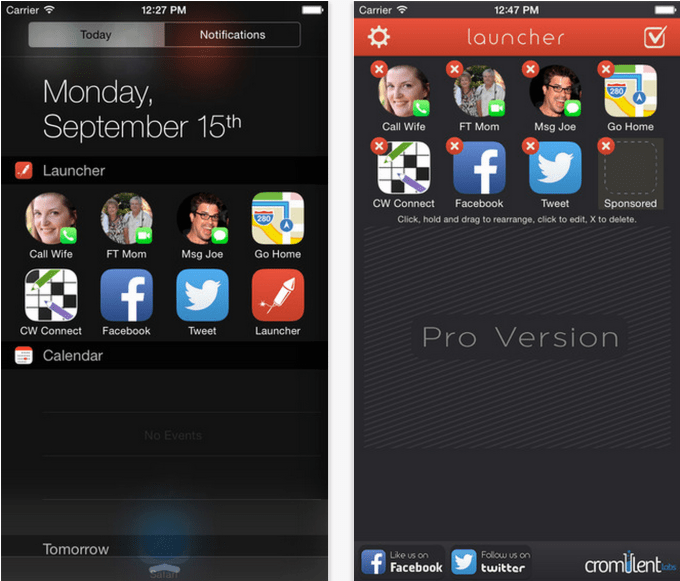 There are several reasons why Apple may choose to reject “launcher” widgets like this, including possible security concerns, plans to launch an official feature that would compete in the future, a desire for the Notifications Center to not become a second homescreen of sorts for users which could mar the experience they want users to have, and more.

But what seems most likely is that Apple had issues either with the way the app could potentially be used to “game” the App Store’s rankings or advertise on your homescreen (or both). In Launcher, there’s slot in the free version that’s a “sponsored” app listing which could only be removed if you paid for the Pro upgrade. (See the screenshot above.) And by pushing the sponsored app, it could potentially boost an app’s download numbers – and thereby, ranking – if Launcher had grown more popular.

The app’s creator is fairly disillusioned by the experience, saying now that he’s not sure if he’ll build more apps. “It seemed that [Apple was] opening up the platform and allowing for more inter-app communication in iOS 8, but this decision shows that they still feel they know what is best for the users, even if users disagree,” says Gardner. “At this point I don’t have any plans to continue developing iOS apps.”