The latest South Park episode is a hilarious smack down on the NFL’s inability to do anything, the Washington Redskins name controversy and startup culture. The episode kicks off with the gang listing off possible names for their startup like “Dense Boner Forest” and “Furry Balls Plopped Menacingly On The Table, Inc.” You will possibly be offended and possibly laugh your ass off. This is South Park, after all.

Some of the highlights include Stan explaining to his dad that he doesn’t need school anymore because he’s doing a startup now. “We don’t want to do anything,” says Stan. Then Kyle chimes in and explains, “That’s why we want to have a startup company.” Cartman gets inspired to call their do-nothing startup the “Washington Redskins.” A clear crack at the offensively named NFL team. This seems to be legally okay, too. The U.S. Patent Office decision to revoke the team’s trademark now limits its ability to protect the brand, paving the way for a bunch of 10-year-olds to usurp the name, logo and everything associated for their own empty purposes. 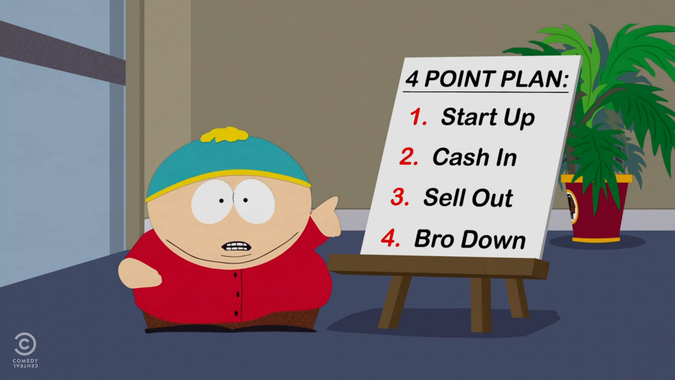 The gang creates a super successful Kickstarter campaign to fund their startup and Cartman goes into full Tim Cook mode as CEO. “Fuck you. Those words mean a great deal to us. They help us express as a company how we see things differently,” Cartman tells a conference full of faithful fans. “And now our company is thrilled to show you all the latest innovations we’ve come up with. To begin with, we have moved the couch from the left side of the office, to the right side,” he tells them.

He then goes on to reveal the new and improved Redskins logo. It’s the same picture of a Native American, but with an added drawing of private parts. “We received a lot of pressure from certain communities to change our logo,” Carter says, alluding to the protests over the actual Redskins logo. “It’s just a bold new way that we can say ‘We don’t fucking care.'” 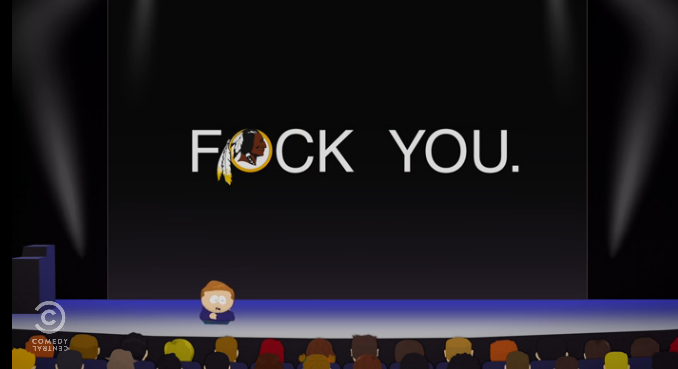 The Redskins team members say they feel reduced to a “stereotype” and people start to turn against the South Park gang’s startup just like they have with the NFL team’s name and logo in real life.

True to South Park style, this episode calls attention to many of the major issues dominating the news and pop culture in the way it does best. It’s the perfect jab to a sports team that insists on doing nothing about its racist name and simultaneously tears into all the bullshit associated with startups that don’t seem to add value.

Those of you in the U.S. can enjoy this latest episode, “Go Fund Yourself” by clicking here.