Apptentive, a company offering in-app feedback tools that allow developers to engage an app’s users, communicate directly, request reviews and more, has now closed on $5.3 million in Series A funding. In an unusual turn, the new funding round was led in part by SurveyMonkey, and will see Damon Cronkey,VP of Corporate Development and Strategy for SurveyMonkey, joining Apptentive’s board.

The funding was a strategic move for SurveyMonkey it seems, as the company will now partner with Apptentive in order to provide “technical and product interactions” for both companies’ customers, including Fortune 500 Enterprise brands.

“What’s unique about this is that SurveyMonkey is leading the round and this is the first time they’re making an investment in a company,” notes Apptentive co-founder and CEO Robi Ganguly. “We think it speaks to what we’ve accomplished so far in helping companies communicate and hear from their mobile customers. This is a pretty exciting milestone for our company,” he notes.

He tells us SurveyMonkey’s funding came about as the two teams had been chatting for a while about how they could deliver better products. Apptentive’s expertise on mobile is a good complement to what SurveyMonkey does on the web, says Ganguly.

“The SurveyMonkey leadership team is fantastic and has built a company that we really admire,” he adds.

Also participating in the round were previous investors, Founders Co-op and Golden Venture Partners, as well as Apptentive’s founders. In addition, Chicago-based Origin Ventures also led, alongside SurveyMonkey.

Apptentive is one of several businesses capitalizing on developers’ needs for a mobile app CRM solution that allows them to better interact with their apps’ users, before those customers turn to the App Store or Google Play and leave messages there, possibly in the form of bad reviews. With a mobile app CRM solution, developers can instead pre-empt users’ concerns about bugs, feature requests and other complaints, by messaging them directly within the app itself, or even redirecting those preparing to leave a one- or two-star review to another channel, instead of the app store.

Solutions like these can also be used to learn more about what users like about an app, and what features they’d like to see in a future release. The end goal with Apptentive and similar products is to increase customer retention, while turning users into engaged fans of the product in question.

Apptentive competes with a host solutions on the market, including those from Appsfire, Appboy, Helpshift, Mixpanel, Localytics, and more. It counts among its customers several well-known names, including Concur, AllRecipes, Overstock.com, UrbanSpoon, RealNetworks, Big Fish Games, Glympse, Gamehouse, and others. Today, Apptentive’s tools are integrated into “thousands” of mobile applications on iOS and Android, 100 of which are “key accounts.” Combined, it reaches over 150 million end users. 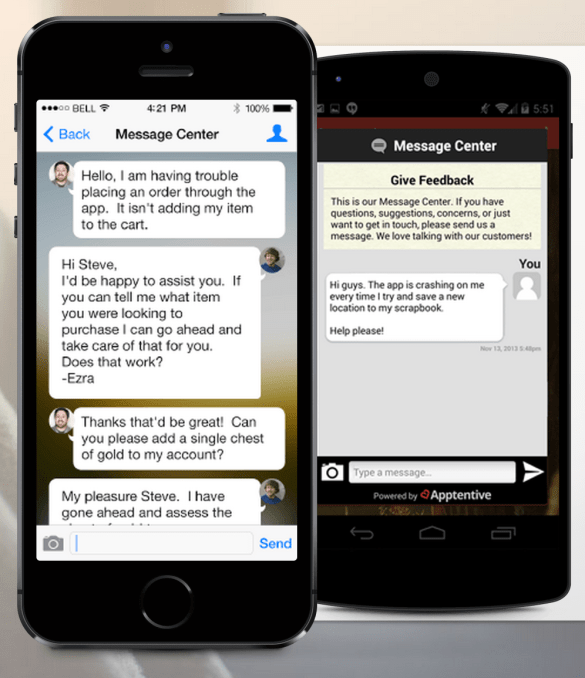 According to Ganguly, the company now powers over 5 million customer conversations per month, but he declined to provide revenue details only saying growth is “very healthy and accelerating on a monthly basis.”

One of Apptentive’s differentiating features it a proprietary measurement it calls “Love Score” which allows app developers to see how well their own app is loved, as compared with the rest of the app ecosystem. Love Score reports offer a variety of customer insights, including how popular an app is versus others, analysis of app store reviews, reviewer quality and bias, and more.

Ganguly says the company also excels in helping companies really converse with their customers on mobile – it’s not about one-way marketing tools that broadcast messages to customers, but is instead about companies actually talking to an app’s users. In addition, Apptentive doesn’t wait to engage customers after they have a problem (it’s not a “support” channel) but helps its developers find the right time to engage with their app’s users to gather opinions and feedback.

The additional funding is being put toward further product development to expand its suite of in-app tools, plus sales and marketing. Apptentive will also be growing its team on both the engineering and sales sides.