[youtube=http://youtu.be/CY9f6UJZlmM&feature=player_embedded]
Metaio and Timetraveler Augmented announced the Timetraveler application today. Using Augmented Reality (AR), smartphone and tablet owners can view historical content about the Berlin Wall, in and near the locations where it used to stand. Content includes historical film footage, reconstructions of demolished sites, and stories about the divisive impact the wall had on Germany during the Cold War.

LAYAR had added a view to their app to show a superimposed Berlin Wall as far back as 2010, however this implementation is a bit more holistic in terms of showing multiple media types and attempting to “tell the story” a bit more.

Available for iOS and Android, the app guides the user through a GPS-based tour of eleven major historical sites along the Berlin Wall at the Berlin Wall Memorial on Bernauer Street.

Once guided to the appropriate locations by GPS, the application switches to optical tracking mode where it recognizes sites and then displays stories of events that happened over five decades ago. Witness firsthand the dramatic escape of Frida Schulze from her apartment window, see the demolition of the Church of Reconciliation, and watch as the border guard Conrad Schuman jumps the barbed wire barrier between East and West Berlin.

It looks like it might only be available in the German iTunes store right now, however Google Play seems to have the link available regardless of location. There are free and paid versions of the app. 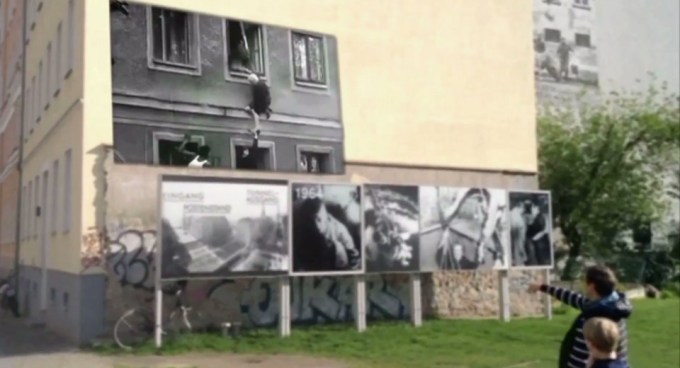