Robots might be unseating the cherry job of wine critics soon. Researchers in Denmark have created an artificial tongue to find out whether expensive wine actually tastes any better than the cheap stuff.

The research, first published in ACS Nano, claims that an optical nanosensor based on surface plasmon resonance (SPR) can discern how you experience the sensation of dryness in wine. And they say this nanosensor can judge the way the tannins will hit your flavor sensors better than the finest wine critic can.

Some may argue that it takes a human, not a robot, to discover what is worth a sip. However, the researchers at Arhaus University argue that the nanosensor is free from the human critic’s personal prejudice. They may have a point. There’s a lot that goes into making wine taste a certain way. Everything from the variety of the grape to the minerals in the soil to what kind of sunlight the grapes received chemically affects the taste and smell of the wine from season to season – in even the same grape.

According to MarketWatch, over 31.4 billion 750 ml bottles of wine are bought and sold throughout the world every year. While some standard ratings have been placed on wine and there’s a decent following in wine personalities and what they recommend, everyone has different tastes in what they like. This makes it particularly hard to decide which wine will do at the local grocery store. 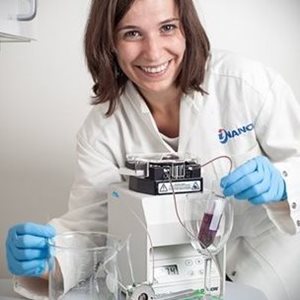 PhD student Joana Guerreiro has taken part in developing a sensor, which – by using nanoscience – can measure how we experience the feeling of dryness in wine. Photo: Lars Kruse, Aarhus University.

Instead of telling you that this wine tastes of leather bound books and mahogany, the nanosensor lets you know just how astringent the wine is. It does this by measuring the molecules in your mouth instead.

“The sensation arises because of the interaction between small organic molecules in the wine and proteins in your mouth. This interaction gets the proteins to change their structure and clump together. Until now, the focus has been on the clumping together that takes place fairly late in the process.

With the sensor, we’ve developed a method that mimics the binding and change in the structure of the proteins, i.e. the early part of the process. It’s a more sensitive method, and it reproduces the effect of the astringency better,” says researcher Joana Guerreiro.

The researchers point out that this technique is not new, but that using it to create a sensor that can measure an effect rather than just a number of molecules is. And the technique can be applied to much more than just wine.

Arhaus University indicates on its website that the science behind this machine can also be applied on a molecular level to develop targeted medicine. “The sensor can be used for diagnostic purposes. It could possibly be helpful for discovering and even preventing diseases,” says Duncan Sutherland, research director for the study.