Offering a different spin on anonymous mobile chatting, Seattle-based Reveal Chat is debuting an app today that lets its users share more with the other party as they become more comfortable with the person they’ve connected with on the other end of the screen. Founded by a pair of ex-Amazonians, the startup is backed by a number of high-profile investors, including former Facebook and Amazon exec, Rudy Gadre and Owen Van Natta, plus former VP of Marketing for Virgin America Porter Gale.

Reveal is also the first Seattle investment by Microsoft Ventures. The 10-person team has raised a total of $1 million.

Reveal CEO Nick Soman, a Stanford and Harvard Biz School grad and ex-Amazon Product Manager, came up with the idea for Reveal Chat back in 2009, after he contracted a paralytic illness called Guillain-Barre Syndrome that left him completely paralyzed for four months. Though he recovered from the illness after six months of rehab, while he was in the hospital, he experienced loneliness and isolation.

“As I got to know the other people in the hospital I learned how lonely they were, too,” says Soman. “I’ve been a connector for most of my life. I don’t think anyone should have to feel lonely like that. So I decided to tackle loneliness as soon as I regained my health.”

Reveal Chat, he now believes, is something that can help others make safe, authentic connections with others, so they won’t have to go through what he did. 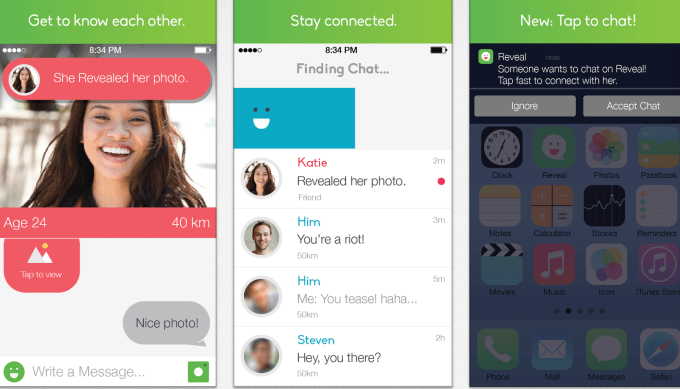 The way the app works is to put users in control of what they share. After signing up (via Facebook!), you can choose to chat instantly with a female, male or select “anyone” and then opt-in to receive push notifications when others are looking to chat with you. All the chats begin completely anonymous – with users only seeing someone’s gender, age and distance.

(Sorry whoever I know 1,000 miles away, age 25, but I exited our chat because, as a much older woman, I actually don’t want to make anonymous social connections with young men. P.S. Reveal Chat? Maybe an age filter would be nice. Also…wait…do I really know a 25-year old on Facebook? Hmm. Maybe Reveal Chat is stacking the deck at launch with on-contract chatters?)

In any event, Reveal is the complete opposite of something like Tinder, for example, where the main motivation for connecting with someone is what they look like, given Tinder’s primary use case is hook-ups. On Reveal, however, as users grow more comfortable, they can later reveal their name or their photo, if they choose.

“Our team wants to cure loneliness by making it safe and worthwhile to talk to someone new instantly,” says Soman. “We are gender balanced and working to make sure we can get this right for everyone.”

While today, anonymity often leads to trolling – as is seen on anonymous social apps like Secret or Yik Yak – here, it makes less sense to engage in bad behavior since the ultimate goal is to get to know someone better. (Unless, I guess, if you’re a troll who prefers the long game.)

Before its launch, Reveal ran a private alpha test with 6,000 users worldwide. During that time, the app users sent over 800,000 messages at a rate of 130+ per user. More than 60% of users returned to the app (more often women), and 80% of users eventually revealed their name or photo.

“What I like best about Reveal Chat is that the user is in control of when they choose to reveal their photo or name. Many can relate to that awkward moment when a friend or business associate says, I saw your photo on xx site, explains investor Porter Gale. “With Reveal, you can remain anonymous until you have a mutual and hopefully trusted connection.”

Reveal is a free download on iOS 7 and iOS 8.