“If you made photos tiny and kept them tiny so they can’t be enlarged, would it reduce the anxiety around taking a photo and get people to take more photos?” Kevin Rose asks me. He’s not quite sure, but he’s going to find out with Tiiny, the new iOS app from his mobile laboratory North that launches this morning. It lets you take a thumbnail-sized photo or GIF and share it to 3×4 grid on the Tiiny homescreen of people who follow you, but it disappears after 24 hours. Rose tells me beta testers shared 5X more photos with Tiiny than on their other photo apps. 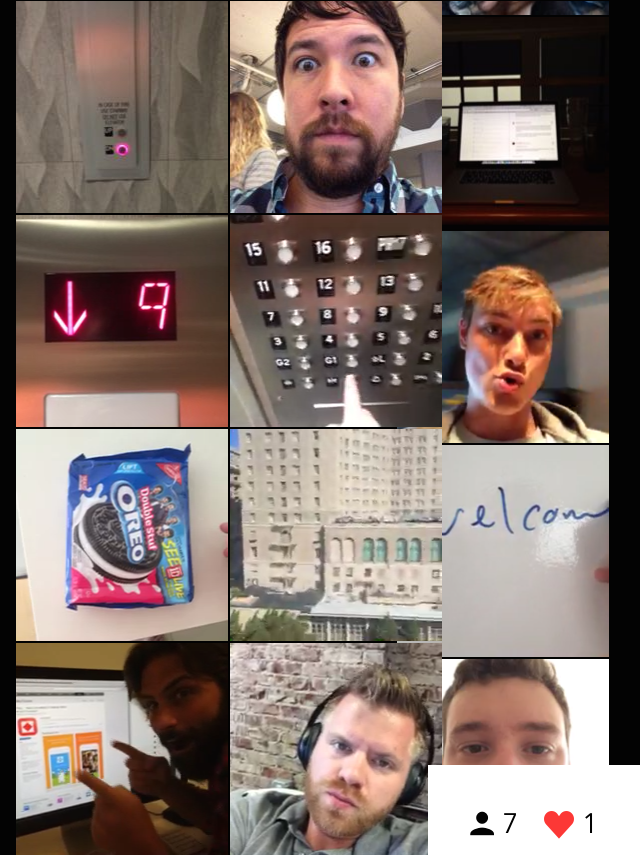 But if Tiiny never takes off, Rose doesn’t care. It only took North three weeks to build, and the small team plans to release a new app at least every three months unless one really blows up. “it’s about having as many shots on goal as possible,” Rose explains.

This strategy puts North at the forefront of a movement to experiment with building whimsical mobile apps without the crushing pressure to succeed and make money right away. Afforded by Rose’s past successes with Digg, Revision3, Milk, and his gig at Google Ventures he just left, he says “I don’t have to have an exact business plan, but I can explore the more crazy parts of my head.”

Little Is The Big Picture 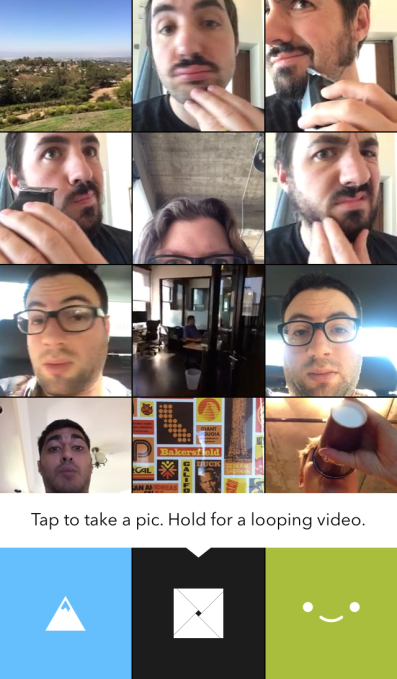 Tiiny doesn’t do much. That’s the point. Tap the camera button to take a photo or tap and hold to take a silent animated GIF up to five seconds long, and they’re all just 212 pixels x 212 pixels. Tiiny lets you import your social graph from the Twitter, and uses the same asymmetrical social model. Your photo gets slid into the first slot on the grids of people who follow you, pushing the rest of their photos down. 24 hours later, it disappears, so you have no profile page. Followers can tap photos to see who they’re from, double tap to Like, and browse a Popular page of the best Tiiny moments.

What’s special is that the photos and GIFS can’t be expanded full-screen, so you don’t have to look perfect. While Snapchat pioneered this ‘shoot from the hip’ style with 10-second self-destructing photos, they’re still full-screen so you’re inclined to agonize over your appearance and framing. Tiiny takes casualness to another level because no one will see that pimple or poor focus.

You also don’t have to worry about annoying your friends by posting too much. While Instagram’s full-screen feed can be overwhelmed by someone shooting non-stop, and you can pester someone with Snapchat direct messages, if you post four Tiinys in a row, it will only take up 1/3 of a friend’s screen. That opens up fun opportunities for photo sequences.

Rose tells me Tiiny is “a two-fold experiment in minimalism, both in how we interact with each other — less choice, less friction, less megapixels — and how we build products at North — how could we build a product quickly?”

He played with both this morning. Rose vowed to himself not to shave until the entire Tiiny development process and launch were done. So today he shared a series of Tiiny photos as he carved his facial hair into different configurations on his way to a clean mug. “It will be funny and ridiculous and stupid but it’s a moment I would not think of sharing on another social network.” 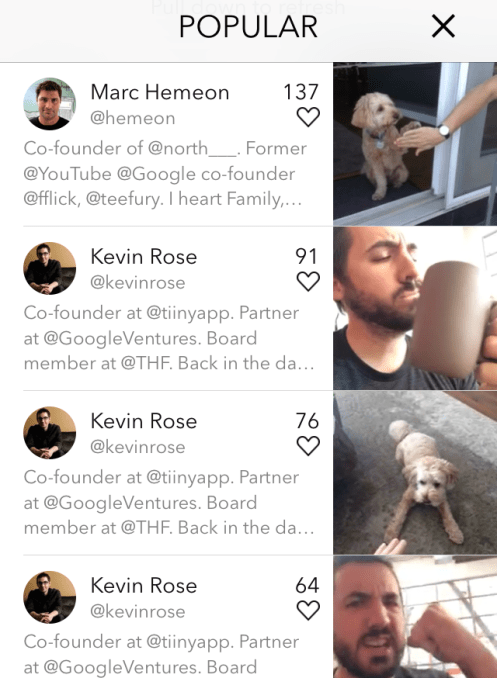 Rose actually dug up the idea for Tiiny while browsing Instagram. “I was consuming a lot of content through the popular pages and tag pages, and I noticed that with the three-across grid you can consume a lot more content faster than a normal stream” he recounts. “With one big picture after one big picture, going down 10 or 20 pictures takes a lot of time.” So he built Tiiny to let you get a feel for what’s up with all your friends instantly.

Of course, many people will say we don’t need any more photo apps. Especially more ephemeral ones trying to coin off of Snapchat’s success. Luckily, Rose doesn’t care. He tells me that if Tiiny doesn’t find millions of users, North will simply open source it or cease development, and move on. Rose tells me “we can continue to try some wild and crazy stuff. Some will be slightly better takes on stuff.” I likened North to an app magazine with regular issues released, and he replied “Every page turn is going to be something completely different. We’re not gong to do photo apps for ever. We’ve got ideas in the cryptocurrency space and there’s no common theme.”

Rose doesn’t really need any more money, which frees him to swing for the fences rather than chase middling success. “We’re looking for those big home runs. We’re not one of those companies or incubators with 6 things going on at the same time. If we have that nice single or double hit that were excited about and it looks good, but it’s surely not going to be a big product we’re not going to hire around it.  We’re going to constantly churn out stuff. When you spread yourself too thin, nobody wins.”

Already, tech’s power players are feverishly posting to Tiiny, though we’ll see if that lasts. You can call the app frivolous or even useless, but Rose reminds us how we first reacted to Twitter, Snapchat, and more to today’s top social app. “They all seemed, at least initially, funny and cute” but not real businesses. Time proved us wrong.