Confirming rumors and leaks, Apple announced this morning that the new iPhone 6 devices will support mobile payments. The feature, which also uses Apple’s Touch ID, will take advantage of NFC technology. That means users will be able to pay for goods and others services in the real world using the payment information already associated with their iTunes accounts.

That, in fact, is Apple’s biggest advantage in entering the mobile payments market where competitors like PayPal, Google and the mobile carriers themselves already offer their own mobile payment solutions, some of which also involve NFC technology.

Today, Apple has over 800 million registered users, some portion of which will upgrade to the iPhone 6 devices. Though that shift may not happen overnight, eventually users will upgrade as their contracts expire and Apple continues to release new features that draw users in.

Apple CEO Tim Cook today said that there are $12 billion in daily U.S. transactions, illustrating the size of this business Apple is now stepping into with the launch of Apple Pay.

“Apple Pay will forever change the way all of us buy things,” says Apple CEO Tim Cook. “We’ve created an entirely new payment process, and we called it Apple Pay.” 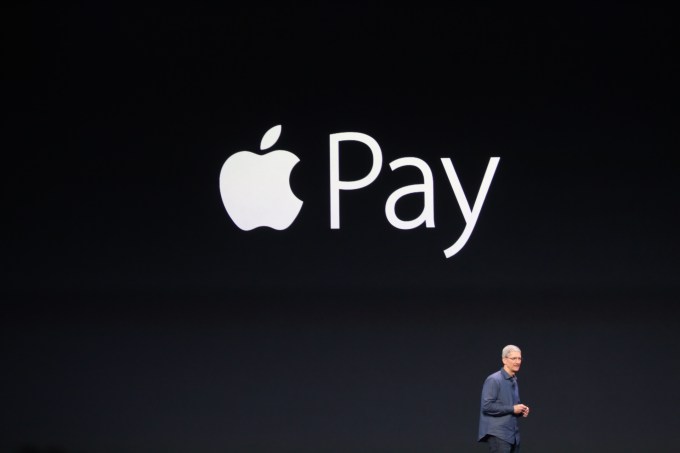 The feature works as the rumors predicted: based on NFC, you just need to tap your phone on a payment terminal and put your finger on the home button for Touch ID.

In Apple’s payments solution, NFC is located at the top of the iPhone, and users will be able to see all their credit cards in the Passbook application which already includes access to things like tickets and loyalty cards. The card information is stored in the iPhone 6’s new Secure Element chip.

Users will be able to use the iPhone’s iSight camera to take a picture of the card and add it to Passbook. Then Apple will verify the card. When you add a new credit card, Apple doesn’t store the credit card on its own servers, or give it to the merchant, and each time you pay you use a one-time payment card.

In other words, Apple creates a device-only number so that each payment has a one-time payment number and dynamic security code. Apple stresses that it doesn’t collect payment history – meaning, it’s not tracking what you’ve purchased. In addition, the “Find my iPhone” feature can now be used to suspend your payment cards.

This focus on privacy plays to Apple’s strengths in that it’s not interested in collecting user data in the same way that other payment providers do. 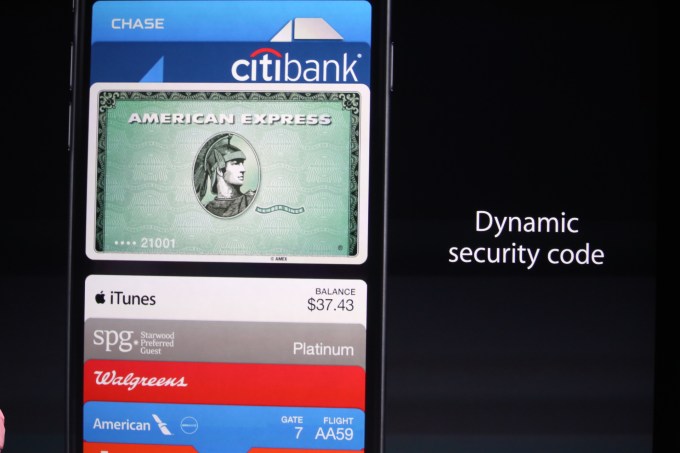 Merchants also will never see your card numbers, because of the way this solution is implemented – they just get a transaction number and receive the money.

6 U.S. banks are supporting the technology at launch, and users will be able to add their AmEx, MasterCard and Visa payment cards. 220,000 merchant locations are also supported, including Macy’s, Bloomingdales, Walgreen’s, Duane Reade, Subway, McDonald’s, Panera Bread, Whole Foods, Staples, The Disney Store, Target, Sephora, and of course the Apple Store. MLB, Instacart, and OpenTable are also supporting Apple Pay, as is Groupon.

Uber has a “Ride Now” feature that will let you buy a ride using Apple Pay, without even creating an account.

Starbucks is another partner for Apple Pay, which is especially interesting because the coffee chain had previously invested in and was implementing Square’s mobile payment technology in their stores. But that rollout did poorly, and we’ve heard a number of rumors that Apple and Square were in M&A discussions (which failed) prior to today’s Apple announcement.

Apple Pay will be available in the U.S. in October 2014. And work is underway to take it worldwide in the near future.