Our identities are prismatic. We’re not the same person to everyone. Yet when you follow someone on Twitter, your feed overflows with a combination of their personal, professional, and social tweets. But thanks to TechCrunch Disrupt Hackathon project Persona, you can choose which dimensions of someone’s identity you want to see. Persona uses machine learning to classify people’s tweets into separate themed timelines around different topics they tweet about, like their work, personal life, and interests.

If you ever wished you could just get someone’s smart professional insights without knowing what they had for lunch, or love their taste in art but yawn when they nerd out on tech or current events, Persona could banish boring tweets from your feed. 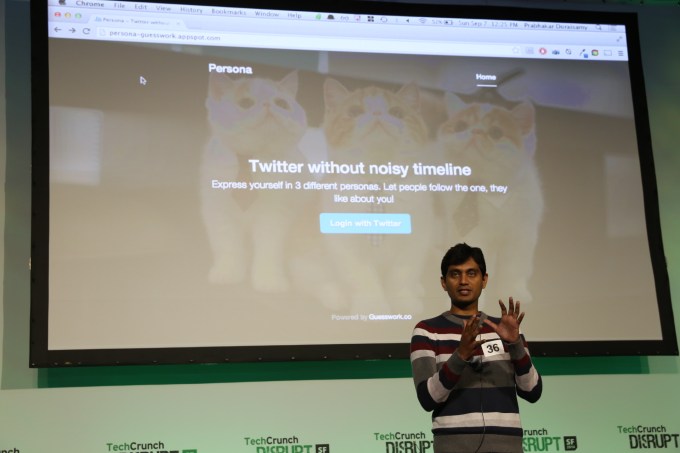 As someone who straddles a lot of scenes, I bet some of my Twitter followers would be relieved to follow just one side of my identity. By day I’m chronicling startups and analyzing the latest Facebook product changes, yet by the afternoon I’m sharing silly memes and soothing songs, and at night I’m posting photos from parties and hippie-dippie life affirmations. Entrepreneurs, culturenauts, and friends all follow me for different reasons, but I fear I overwhelm their streams with types of tweets they don’t want.

Persona could solve this. It was built by the machine-learning guru and CEO behind Guesswork, a customer intent prediction and personalization tool we covered last month. Mani Doraisamy and his brother Prabhakar tell me that on Twitter “we’re blowing our own trumpets,” more concerned with broadcasting our opinions than with those who receive them. So while Persona began as a hackathon project, Mani plans to formally launch Persona soon here.

Persona will automatically scan the words used in your tweets and assign them to three streams on your Persona page: personal, professional, or social. Alternatively, you can add custom labels to these dimensions of your identity and tag your tweets into them, which also teaches Persona’s algorithm. If you want to check out the different version of someone else’s Twitter stream, they don’t need to have signed up. Persona will run its machine learning algorithm on their profile and do the categorization for them. 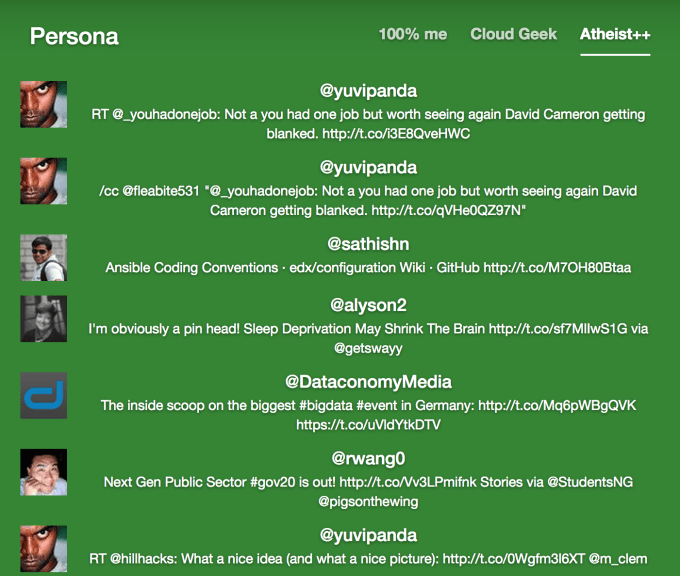 By working with the Twitter dev team at the Disrupt Hackathon, the Doraisamy brothers learned how to build Persona without running into API limit problems. And while they don’t plan to monetize the app directly, they’ll feed its learnings into Mani’s app Guesswork.

Some believe we should all own up to the different sides of personality and live with a unified identity. But that’s easier said than done if you live or work with people who might not take kindly to your political views, humor, or after-hours adventures. You should never be ashamed of who you are, but with an app like Persona, you can still respect the time and attention of people who follow you, no matter who they want you to be.