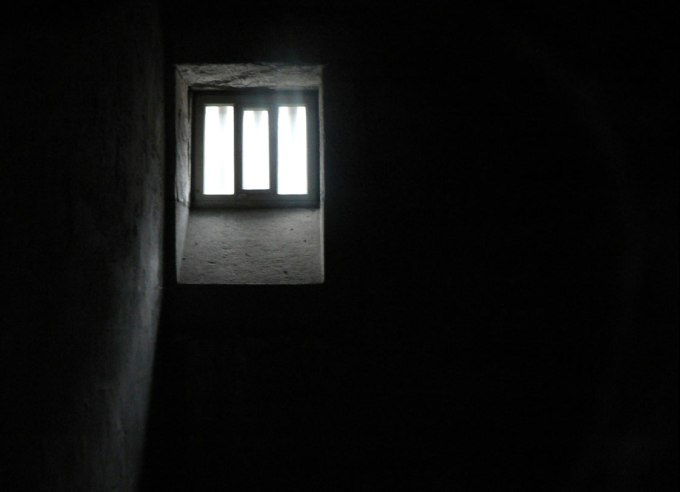 We need no ghost to tell us something smells increasingly rotten in the state of social media.

Facebook forcing users to download a separate messaging app if they want to carry on IMing their friends.

Facebook manipulating the emotional cadence of content to figure out whether it can actively impact users’ emotions.

Twitter flirting with the idea of adding even more algorithmically selected content into the timeline — content that prioritizes what’s already popular, and thus mainstream, at the expense of non-mainstream interests, nuance and minority views.

Meanwhile, studies suggest the majority of Facebook users are unaware that what they see in their newsfeed is not actually the sum total of their friends’ news, but rather an algorithmic skim — biased for clickbait, stickiness and, of course, advertising.

There are a few clear themes to point to here that can illuminate exactly where the rot stems from. The overarching theme being monetization — or, more specifically, increasing external pressure to monetize these social services.

Both Facebook and Twitter are free at the point of use, yet are publicly traded companies, answerable to shareholders and investors. That inevitably drives a need to achieve mainstream scale and mass engagement to deliver the kind of returns their shareholders expect.

User growth has been a particular problem for Twitter. It’s not an easy network to understand in the short term — which has undoubtedly retarded its growth. But, like all things of lasting value, effort expended over a longer time period leads to refined reward.

It’s no accident that long-time Twitter users genuinely love the service. I am one of them. I signed up in August 2008 and have been tweeting ever since. It’s the only digital service I feel any kind of emotional attachment to. Conversely, you don’t have to search for long to find long-time Facebook users expressing the opposite sentiment.

Technically I am also a long-time Facebook user, joining the service back in April 2007. But I don’t think of myself in those terms — and certainly wouldn’t identify as one. I’m still on Facebook, largely for work purposes or to use Facebook as an identity layer for other apps and services, but I am not actively engaged with Facebook. I rarely post anything, log in only sporadically, and — despite Facebook’s position as the undisputed leader of social media services with more than 1 billion active monthly users — feel zero personal attachment to it.

If Facebook disappeared tomorrow I would barely notice its absence (except perhaps in a welcome sense via the sudden lack of spam emails), even though every time I do sign in there’s an automatically populated feed of social content just waiting for my eyeballs to lock on — and that’s pretty impressive, given how little effort I expend on using Facebook.

But if Twitter, the human-curated information network, ceased to exist? Well, it doesn’t bear thinking about…

The thing is, effort does not scale well online. People have become conditioned to expect convenience; to expect to have the hard work done for them. The rise of mobile usage has hugely fueled this mentality — making it even more imperative for a digital service to be hyper simple to set up and use. If it doesn’t ‘just work’ within a matter of seconds it likely won’t get used at all.

Although I don’t have to spend very much time at all maintaining my Twitter feed now, with six years invested in the service, that’s exactly because I have spent multiple years figuring out who it’s worth my while following (and who not).

Sure there are undoubtedly plenty of folk on Twitter who I haven’t found yet who could expand my network in new and interesting ways. But you can’t usefully follow every interesting person (whatever Robert Scoble says). And, more importantly, I don’t trust an algorithm that’s geared towards maximizing business profits to identify interesting people on my behalf. That algorithm would be working for Twitter’s shareholders, not for my brain.

Also worth emphasizing: human time and attention span are finite, so any digital service that steers you away from the things you are actively interested in for its own profit-making ends is acting parasitically.

Now obviously most people aren’t going to invest multiple years’ worth of their time into making a digital service really special and useful to them. Mainstream scale demands a self-organizing system that takes that sort of effort away.

Which brings me to another theme here: increasing automation, and thus decreasing human (end-user) control.

Automation has plentiful business benefits. It lowers costs over the long term because it’s autonomous; set it going and it steamrollers on, letting the business owners sit back and watch the data (and money) roll in. Yes automation is linked intrinsically to monetization.

Automation can also be granularly controlled via algorithmic levers. It invites and even encourages this sort of mass tweaking. It’s a digital Petri dish that becomes a natural playground for A/B testing. A business can clinically figure out how to maximize factors such as user engagement or ad views just by running a couple of new algorithmic recipes and comparing the results — selecting whichever one maximizes its bottom line and discarding any that don’t. Minority concerns are quashed by this process logic.

Such experiments aren’t about reintroducing the human nuance that an algorithmic approach inevitably flattens; they just optimize core algorithms for particular business outcomes: page views, stickiness, user engagement, and so on. And for the overarching business imperative: profit. (Not for nothing that publicly traded corporations have been compared to sociopaths.)

The business advantage of limiting what users can do is that user behavior can be better channeled and predicted. We the users become lab rats forced to eyeball whatever is placed in front of us.

Automation is certainly a marvel. But it’s not without cost. And to pretend otherwise — to pretend that there is no difference between an autonomously provisioned service and one with human brains actively influencing what’s seen and surfaced — is just plain wrong. It may be that in future, AI-powered automation closes that ‘uncanny valley’ gap, by being able to act in a way that’s almost indistinguishable from human decisions. But we’re not there yet. And we’re likely a very very very long way away from that collapsed singularity. Finally, within the odorous passageways of our modern social media citadels, we stumble upon another theme: enforcement.

Slowly but surely the freedoms that initially drew us into these glittering social spaces are being withdrawn, as barred gates drop into place — limiting our usage options, and controlling and constraining the social content we see.

The walled gardens shrink, getting narrower in outlook as the logic of their underlying content-filtering algorithms becomes evident.

The business advantage of limiting what users can do is that user behavior can be better channeled and predicted. We the users become lab rats forced to eyeball whatever is placed in front of us. Many people won’t even realize exactly how staged and contrived their digital social services have become, as they are encouraged to keep scrolling mindlessly through all the tasty looking, populist clickbait fired at their eyeballs.

Yet the original promise of a free social space is reduced to the singleminded grind of a hamster wheel — a wheel whose speed is determined not by the user choosing to hop off and on, but by a pace-optimizing profit-maximizing machine concealed behind its walls.

Automation is also a type of enforcement. It has to be. It implies a lack of choice stemming from the lack of a human hand steering things. Control is taken away from humans and handed over to what are (for now) human written algorithms.

And the power of algorithms to manipulate the behavior of an entire user population can evidently be corrupting. Witness Facebook’s consent-less emotional experiment. Enforcement can apparently lead to a service investigating whether it can enforce or inculcate a particular sentiment among its users just to see if it can.

This is awful but hardly surprising, given that advertising as a category seeks to enforce a choice — to override our human free will to decide on something without any outside influence by lathering on the shiny, opinion-massaging snake oil — so it’s a natural next step for social services whose business models are built on ad clicks to seek to enforce more and more of the decisions of their user populations.

Such as, for instance, Twitter polluting users’ timelines with content from accounts that they are not following — and offering no opt-out for this ‘feature’.

But hey, once you have lured enough non-paying users onto your service, why then it’s time to make ’em dance to the tune of your advertisers, right?

Without millions and even billions of people freely producing and uploading content there would be no social media palaces at all.

Facebook and Twitter are indeed free at the point of use. And the hackneyed tech maxim runs that ‘if it’s free you’re the product’. And yes it follows that if you’re the product then you’re not an agent involved in the service but a unit opted in to being manipulated by the service. The service views you as a controllable commodity to be stacked and positioned, pushed and steered. To be moved howsoever the business sees fit in order to achieve its goal of greater profits.

But there is a problem with that logic. Thing is, without us human users of these social services there would be no Facebook and no Twitter. Without millions and even billions of people freely producing and uploading content there would be no social media palaces at all. Their passageways would be empty, devoid of content, lifeless. There really would be nothing to see here. 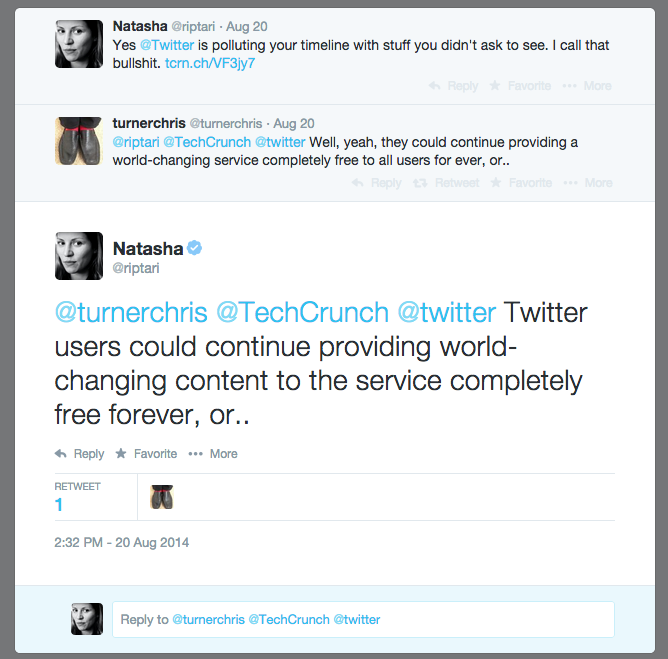 It can be difficult to decry social media’s inexorable shift towards algorithmically curated info-feeds on the grounds that these businesses need to drive usage to please their investors. After all that is how publicly traded companies operate. The motive is continued profit growth, and bigger profits demands more users, and getting more users requires becoming more mainstream.

In this blind drive for exponential scale the individual user loses all meaning, and has zero value to the business. The business now concerns itself with handling massive blocks of users — and of course algorithms are better at handling segmented groups that sit within monetizeable buckets. Algorithms are born designed to perform that sort of heavy lifting.

But there is certainly a moral argument that says services like Twitter are betraying the very individuals whose efforts built their businesses in the first place. The people who invested the time and effort that allowed the service to scale large enough to be able to IPO. Not that sociopathic corporations compute the logic of moral arguments, of course.

Another point worth making: It can be rather difficult to articulate exactly why a service like Twitter can feel so alive, when — conversely — Facebook, an apparently similar social service, can leave you feeling cold, suckered in, used and abused. Or indeed just bored by homogeneity.

But actually it’s really rather a simple distinction: one is the product of a single human mind; the other is the product of an algorithm. Twitter, as it (mostly) is now with users in the driving seat, is a service with a human soul. While Facebook, which long ago prioritized algorithmic logic over human choices, is just another mechanized process.

Sure Facebook is dressed up to look familiar and human, thanks to its ability to surface the faces and photos of your friends. But really there’s nothing behind that mask but a profit-maximizing imperative.

Celebrity gossip, viral videos, wedding announcements, and an unending carousel of baby photos… Welcome to the mainstream logic of AlgorithmVille!

Drive safe, and be sure to stay right in the middle of the road.