Devices that plug into smartphones to augment the built-in sensors with additional smarts are continuing to make their way to market, many fueled by crowdfunding. Here’s another contender aiming to extend the capability of Android smartphones: a teeny breathalyzer called DrinkMate, currently seeking $40,000 on Kickstarter to make it to market by December.

The 1.8-inch long device is designed to plug into a powered Micro-USB port and, when used in conjunction with its companion app, displays a blood alcohol content (BAC) rating after the user has breathed over its semiconductor-based sensor. DrinkMate does not require a mouthpiece, the user just blows into an air inlet, which helps keep the design compact and the device hygienic.

We’ve seen smartphone breathalyzers before, such as the hefty Alcohoot for iPhones, which we covered last year. But the DrinkMate is a lot smaller and a lot cheaper, following a Moore’s Law trajectory.

It also claims to be able to deliver on the accuracy front — which is obviously the key aspect here, and a claim that remains to be tested given this is still a prototype — claiming BAC measurement levels at an accuracy of +/- 0.01% BAC at a BAC of 0.02%. DrinkMate’s sensor maxes out at 0.20% BAC but if you’re that drunk you’re unlikely to be compos mentis enough to use this gadget, let alone find your car keys.

In addition to accuracy levels, it remains to be seen how DrinkMate’s performance holds up in rugged, real world environments when the drinks are flowing and users may not be following best practice testing procedure. A savvy companion app that steps users around potential pitfalls, such as by ensuring they wait long enough after their last drink to avoid an inaccurate rating (based on alcohol in the mouth), is going to be required to avoid misleading readings.

DrinkMate’s Washington, DC based makers say the basic idea behind the device is to generate a visible, shareable BAC rating as a way to pile more peer pressure on groups of drinkers so they keep each other safe. That’s a laudable aim, but there is of course a risk of encouraging opposing behavior — so again the tone of the app is important. The current app designs are pretty basic but the makers say they are adding more features weekly. 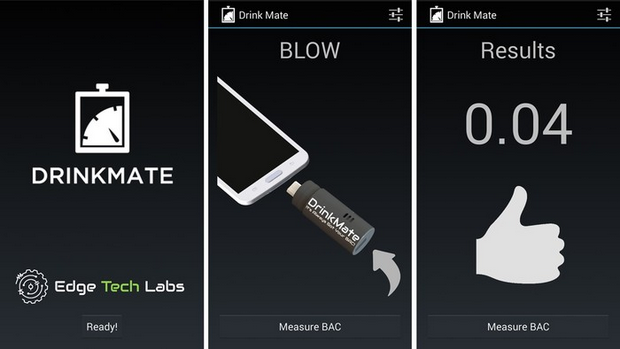 While ever more mainstream interest sensors, from location sensors and motion/health focused hardware, are being embedded into phones, more specialist and/or targeted sensor hardware — such as the DrinkMate’s BAC analyzer — is something that makes sense as a smartphone supplement.

Bottom line: not everyone is going to want or need this type of sensor embedded in their phone but there will be people who see value in having various specialized gizmos hanging off their keyring which, after being plugged in, extend the utility of their mobile device. (Or indeed which they wear on their person and connect to their mobile via Bluetooth.)

Price wise the DrinkMate is currently being offered to Kickstarter backers starting at $25.

The hardware is guaranteed compatible (tested) with the following Android devices:

The makers’ say they are planning an iPhone version but only if their Kickstarter campaign for the Android version is successful.

At the time of writing they have raised just over half of their $40,000 target with another 25 days left to run.