A new mobile application called Tripcast, built by the team that created photo-sharing app Cluster, allows travelers to privately share their photos with their friends back home. The app lets you create a travel journal of sorts, by not only collecting the photos and sharing them, but also plotting them on map, and inviting fellow travelers to build albums with you.

This is not the first time the team from Cluster has worked on a secondary project in the photos space – they also previously released a handy tool for designers and developers called Screenshotter, which helps you organize your iPhone screenshots into more usable albums.

Like that earlier effort, which was more of a side project, Tripcast also takes the larger idea from Cluster involving mobile photo albums and private sharing, and spins it off into a niche aimed at a particular crowd. On Cluster, users can build collaborative albums of any sort, whereas Tripcast is aimed only at travelers and their friends.

Explains Cluster co-founder and CEO Brenden Mulligan, the new application isn’t really a side project this time, but is an “extension of Cluster.”

“A ton of people use Cluster to create travel journals, but wanted features that don’t really fit inside our main app,” he says. “For example, travelers wanted to see the photos they were sharing posted on a map, but when we added a map to Cluster it seemed very out of place in albums that weren’t travel related.”

Other times, the users just wanted to share where they were, without attaching a photo every time. 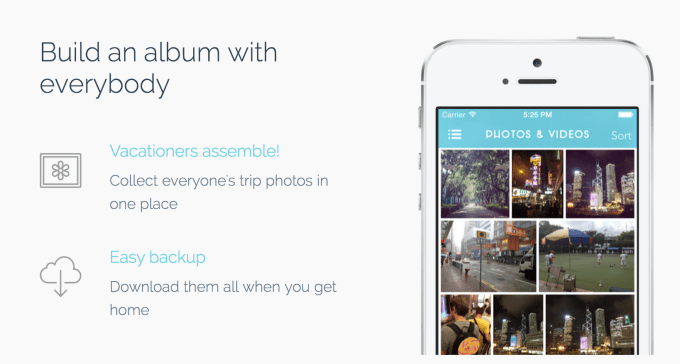 Tripcast has been built in a way where the map is more central to the experience, so users can share their location as they post other trip notes, photos and videos. They can either create these travel journals by themselves or with their travel buddies by inviting them to join. And when users return home, they can download all the photos that were shared.

Meanwhile, friends and family back home are notified when there’s new content, and can like and comment on individual posts very much like you could on Facebook, or any other social network. The difference, of course, is that Tripcast is private – you’ll have to be invited to an album in order to see the content shared. 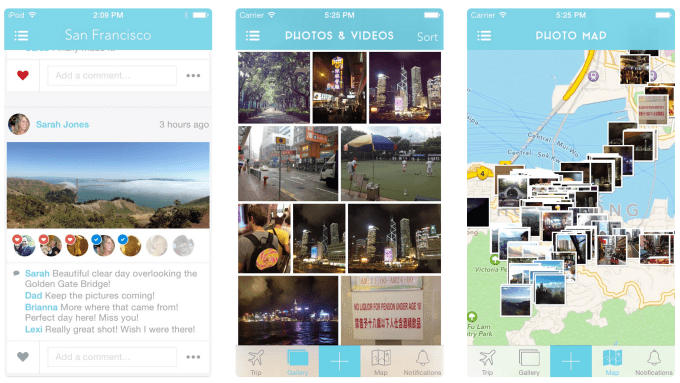 The only issue I have with Tripcast or Cluster is that the sign-up flow requires you to invite your friends before you can start building your album. Although the app informs you the user won’t be contacted yet, having to stop and think about who you’re going to invite – and do you have their email? should you use that or their phone number? – can mentally slow you down. I’d love to be able to jump into the more fun right away, which is curating your photos into an album.

That said, like Cluster, Tripcast is another polished, well-built app from a talented team. It may not be something you use everyday (unless you travel for work, or lead an amazing life), but it’s a viable alternative to Facebook for sharing travel photos.

The app is free here on iTunes and here on Google Play.