Downtown wants to change the way you order and pay for food, starting with its launch today at the Palo Alto’s Coupa Cafe, a common startup meeting spot.

Although it’s easy to make online purchases or order food on your phone for delivery, the way you pay for a meal when you’re inside a restaurant has relatively stayed the same. But with its iOS app that launched today, Downtown allows you to make in-store orders and purchases directly from your iPhone.

Then using iBeacon technology, the Downtown app lets the restaurant know exactly what table you’re sitting at so they can deliver your food directly to you. 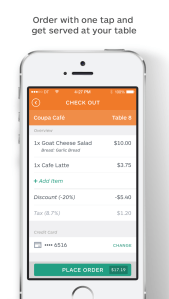 Using iBeacon technology to place orders may seem like something you’d only find at a cafe known to be hotspot for startups testing new products and meeting investors, but Downtown co-founders Phillip Buckendorf, Xavier de Ryckel and Max Noelle already have plans to integrate with other food trucks and restaurants in the coming months.

The team first came up with the idea for Downtown last year when they made a $199 purchase at Apple from a mobile device. They wondered why they couldn’t do this for other, smaller purchases at other Palo Alto businesses.

“We realized it was more difficult to buy an ice cream than make a $199 purchase at Apple,” Buckendorf said. “We realized this seems very broken.”

Although the app currently is only available for iOS, Buckendorf says customers with Android and Windows phones will still benefit from Downtown because regular lines and wait times will move faster.

The key difference with Downtown is that it takes this mobile payment idea a step forward by using the iBeacons to track a customer’s location.

Initially Downtown will focus on local eateries and chains, particularly those with counter service. However Buckendorf says several premium restaurants have also expressed interest in the technology.

In addition to offering the consumer facing app that allows customers to order and pay for their meals, Downtown also has an app version available for merchants. Merchants using the app will get a flashing alert when a customer has placed an order.

Buckendorf says installation is easy for restaurants. Downtown provides them with the iBeacons and app for free, that can simply be taped to the bottoms of tables. At Coupa, customers will be able to see the iBeacon technology in glass cases.

Currently Downtown takes just a small percentage, 3 to 5 percent, of every purchase made on the app that Buckendorf says mostly covers credit card fees.