Social media is not living up to its promise of being an online outlet for discussion that mirrors our communications and conversations that take place in the offline world. In fact, people are less willing to discuss important issues on social media, than they are in real life, a new report from Pew Research Center has found.

It may seem like an obvious conclusion: of course, people are more hesitant to speak up with a contrary opinion when all their friends, family or colleagues feel differently. But there’s been little research that quantifies just how unwilling people are to take a potentially unpopular stance on outlets like Facebook and Twitter.

Pew refers to the this tendency to keep opinions to yourself, when you believe they’re not widely shared, as the “spiral of silence” – a term coined in the mid-70’s by a researcher studying the nature of public opinion.

“Some social media creators and supporters have hoped that social media platforms like Facebook and Twitter might produce different enough discussion venues that those with minority views might feel freer to express their opinions, thus broadening public discourse and adding new perspectives to everyday discussion of political issues,” explains Pew.

But as it turns out that optimistic desire is not quite the reality. If anything, social media is encouraging users to keep opinions to themselves.

In its study, Pew focused on the controversial topic involving Edward Snowden’s revelations of widespread government surveillance, because that topic saw a variety of opinions across the U.S. as to whether his actions were justified, and whether the government’s policies themselves were good or bad. 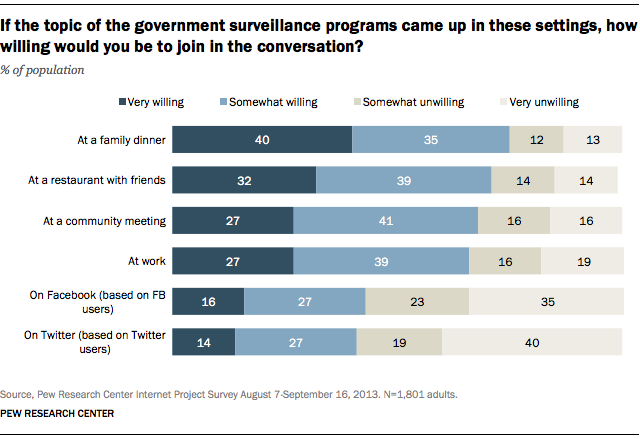 This, explains the report, “challenges the notion that social media spaces might be considered useful venues for people sharing views they would not otherwise express when they are in the physical presence of others.”

But here’s the kicker: not only did social media silence users online, or fail to be a place where they could more freely discuss topics when they couldn’t do so with real-world friends, it also seemed to change people’s offline behavior, making them less willing to engage in potentially controversial discussions.

Social media users, says Pew, were less willing to share their opinions in face-to-face settings than others. The typical Facebook user was half as likely to have a discussion about the topic in the offline world, while Twitter users were 0.24 times less likely to do the same.

Of course, it’s worth pointing out that the choice to use the Snowden situation as the basis for this particular study could be flawed – after all, social platforms, including Facebook, were implicated as being among the places the government tapped to listen in on citizens’ conversations. Perhaps citizens didn’t want to publicize an opinion on this particular matter, but would be more willing to do so on others.

The study, for what it’s worth, didn’t get into the “why” question regarding people’s decision to stay silent, but theorized it could be attributed to a number of factors, including not wanting to disappoint or get into arguments with friends or post things that HR departments or prospective employers could one day discover. Plus, Pew says that an individual’s decision to share an opinion could also relate to their confidence and understanding of the subject as well as how intense or apathetic they felt.

Because of its sample methods (1,801 people via survey) and choice of topic, Pew’s study might not be a fully accurate example of social media’s silencing effects, but it’s definitely fodder for discussion – if you dare! – as well as further research.