Sync, a free file-sharing and synchronising service from P2P company BitTorrent that works like a server-less, cloudless Dropbox, has amassed 10 million user installs and 80 petabytes of data transferred since first going live last year — buoyed in part by a wave of sentiment against cloud-based services that some suspect keep your private files less private than you would hope (something BitTorrent itself has played up).

Today, BitTorrent is unveiling a new version of the app, still in beta, with features like sharing links and file controls that BitTorrent hopes will see it gain more mainstream adoption.

BitTorrent released an API for Sync in November 2013, and it says that to date there have been 4,300 API keys distributed. The idea, too, will be that the easier Sync is to use, the more likely developers will be to implement it in their work.

A couple of hurdles, however, remain: to read (or send) a link, you still need to have the Sync client installed on your device — there are clients for Windows, OS X, Linux, Android and iOS — a gating factor that P2P companies have yet to get through without bringing in servers.

“Going online would require a web server hosted somewhere, and BitTorrent won’t do that,” VP for product management Erik Pounds says. “It’s in the mission of the company. Privacy is not up for debate.”

And you still have to “download” the file in order to consume it — there is no option for streaming a heavy video, as such. On Sync’s mobile apps, you can effectively “selective Sync.” In other words, you can see what files are available and only download the ones you want — a set up to preserve your phone’s capacity.

But in the place of these two caveats, Sync 1.4, as the version is called, gives the whole app a much smoother experience that could see it find more users regardless.

Or, as Pounds described it to me, “Sync always did something magical by easily moving files between two devices. But now we are making that experience much more simplified.”

Here are the new features:

Whereas in the past, a user needed to share files by way of complex keys, the new version lets users share files with links that you can send in emails, messages or via QR codes. 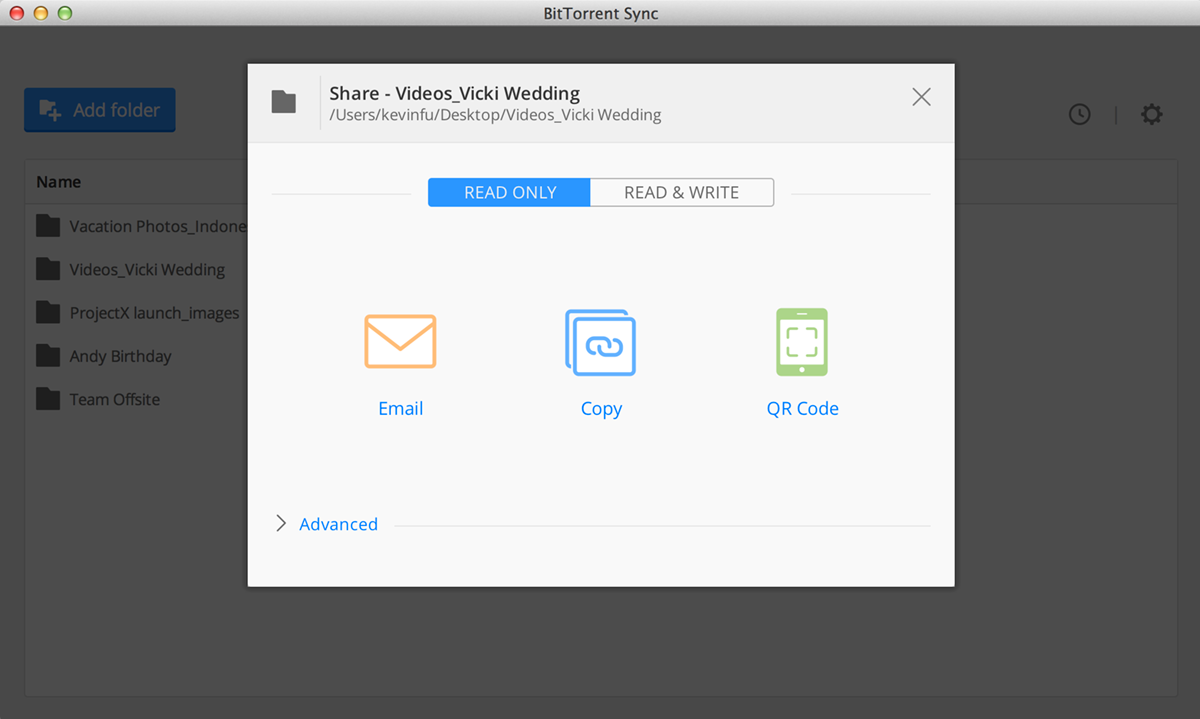 Now, once a user gets that link, if the user does not already have Sync, he/she is directed to a way to download it to read the link — in other words, an easy way to share the files with people who you have not shared with before, who may have a folder set up in their Sync client already, but also a way of marketing the product. (Keys, it should be noted, will also continue to work.)

On top of this, a sender now has different options for how to send a file, either as a read only or read/write file. The links, meanwhile, can be set with an expiration date, and also a limit to how many times they can be viewed, and even if you choose with a specific approved name, at which point they are no longer valid.

Pounds says that these new features have been some of the most-requested from users since Sync went live, but there have been others, too, and that is where monetization will eventually kick in.

“We are actively developing some functionality that we will want to monetize on top of what we are already doing,” says Pounds. This will focus, most likely, on enterprise customers and features for them — perhaps around customised file sharing boxes, or guaranteed quality of service around the file transfers.

“We are dedicated to producing an excellent free version of Sync but we are going to develop premium functionality that we feel has value in certain environments.” He says that the goal is to get Sync out of beta and into a commercial version by “early next year.”