For the nearly the last ten years, Mike Farmer has been trying to unseat Google from its perch as the king of search. Now, four years in to his second search startup, Farmer thinks he may have found the next leap forward.

From its base in Kansas City, Kan., Farmer’s Leap.it is looking to wrest the search crown from Menlo Park, Calif.’s dynamic duo with the help of an unlikely group of partners — the New York publishing establishment.

“We’re pitting New York against Google,” says Farmer. Farmer is already talking to a number of publishers who agree that his company’s approach to real-time information discovery could be the weapon they need to take back control of their content.

The battle between publishers and internet aggregators and search engines stretches back several years as content providers chafed at the fact that their editorial content was making millions for the search companies that would serve it up.

Using Leap.it that content, and any other relevant information around it can now live on the publisher’s own site, thanks to a new feature the company is calling the embedding.

Founded four years ago in Kansas City, Farmer’s latest attempt to challenge Google arose from his evolving understanding of how information discovery happens. The company’s search service displays information in a card-like visualization that shows search results around a topic using real-time data and inputs from social media, along with curated information from real people.

Using the company’s service users can create “perspectives” on topics that are updated with relevant information from Twitter and other social media. The concept was compelling enough to attract roughly $1.1 million in convertible financing from an angel investment syndicate including Brad Feld. 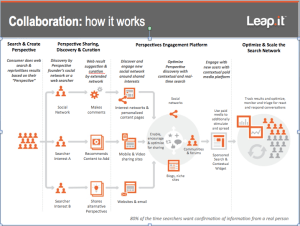 Akin to both Google Now and Facebook’s graph search , Leap.it’s management hopes that its latest embed feature will both spur adoption of its search features and give publishers a way to fight back against Google.

“Google leverages the content on the front end,” says Farmer. “Once you read it, you search more. And they’re like a toll booth.”

By creating curated content from the original sources, Farmer thinks the need to go to a search engine, be it Google, Yahoo!, or Bing, can be circumvented. So far, Farmer’s raised nearly $3 million to support Leap.it and its vision, including cash from Midwest early stage institutional investors like Dundee Capital. Now the company is on the road looking for $4 million in fresh cash on the heels of the $1.1 million financing from Feld and friends.

“It’s a $16 billion industry,” says Farmer of the search market. “Search is so vast, and in the Google world there is only one way to trip them up and that’s through the publishers and the results that we’re doing.”

Reaching out to publishers is only the first step, according to Farmer. “We actually think that there’s the possibility with voice, geo-positioning, and social search to create a super compelling experience,” he says. “Where voice is the hunting tactic for data, and geo-positioning is the fine-tuning, with in-network, curated results from trusted sources. Those three things working in harmony on some level is really compelling.”