Whether or not we like to admit it, our relationships with our colleagues are among the most significant in our lives. Dealing with their quirks (endearing or otherwise) can take up as much time as actually working. A startup called Good.co wants to make it easier for co-workers to get along by taking research from organizational psychology and distilling it into a series of easy-to-understand personality quizzes.

The company, which has raised $3 million in funding so far and took part in TechStars Cloud program last year, has been around since January 2012, but recently launched its first mobile app for iOS, which features new quizzes once every couple of weeks. It is now working on a monetization strategy that revolves around subscription-based tools for businesses and companies.

“Americans are disengaged at work and there is a massive human cost and economic cost associated with it,” says Good.co co-founder Samar Birwadker.

“A huge part of the problem is that there is not much transparency at both ends,” he adds. Resources like LinkedIn makes networking and applying jobs relatively easy, but it’s hard to see if someone will be a good personality fit for a company. Laszlo Bock, the senior vice president of people operations at Google, said last year in an interview that GPA and test scores are mostly “worthless” in determining how people will fit in at a company.

Ultimately, a lot of a person’s professional success hinges on their ability to get along with colleagues and supervisors.

One of Good.co’s co-founders is Kerry Schofield, an Oxford-educated psychologist, while its advisory board includes human resources and management consultants. Good.co’s quizzes are based in part on the Big Five personality traits, which measure “openness, conscientiousness, extraversion, agreeableness, and neuroticism.” 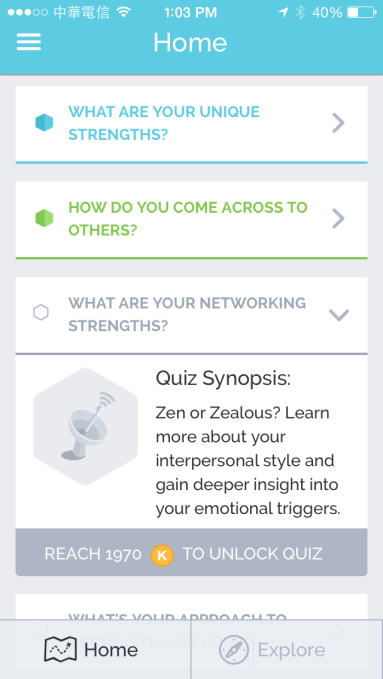 Good.co, however, doesn’t use words like “neurotic.” In fact, the tone of its quizzes and results is almost relentlessly upbeat. Instead of just one personality “archetype,” you get three out of a possible 15, though your results may shift as you complete more quizzes. Types include “maveric, go-getter, and visionary” (Birwadker’s cluster) or “idealist, dreamer, and inventor” (mine). Companies get labels like “nuclear family” or “space colony,” that are further divided into subcategories. For example, you might work at an empathetic or aggressive nuclear family.

One of the quizzes answers the question “how do you come across to others?” My results told me, in part, that I am an “independent and introverted” person who is also a “hard worker and [is] most successful when surrounded by limited distractions.” That’s a bit different from what I’ve heard from other people about their first impressions of me (“aloof” and “cold” were some choice adjectives), but then again, as an idealistic dreamer, of course I prefer Good.co’s upbeat approach.

“We worked really hard on not making things negative because we don’t think there is such a thing as a bad company. There’s a right place for everyone and right employee for everyone,” says Birwadker.

Over 170,000 people have used Good.co’s Web app and answered more than six million questions. Birwadker says 15 to 17 percent are recruiters, while 30 to 40 percent of users are passive or active job seekers.

As you take more quizzes, you get a “fit score” that assesses how you will fit into a certain company. It can also show you how to better interact with colleagues at your existing job.

Good.co currently has about 5,000 company profiles, most for mid-size to larger firms, that were put together using information from users, as well as Good.co’s own research into things like how many acquisitions a company has made, its geographical footprint, or revenue from old versus new products.

“These tell you a lot about their attitude towards growth,” says Birwadker.

You can also use the app to find advice on how to deal with different personality types by (anonymously) answering questions about co-workers. For example, if someone is more of a “technician” than a “mastermind,” you should stick to the facts when talking to them, instead of going into abstract concepts. 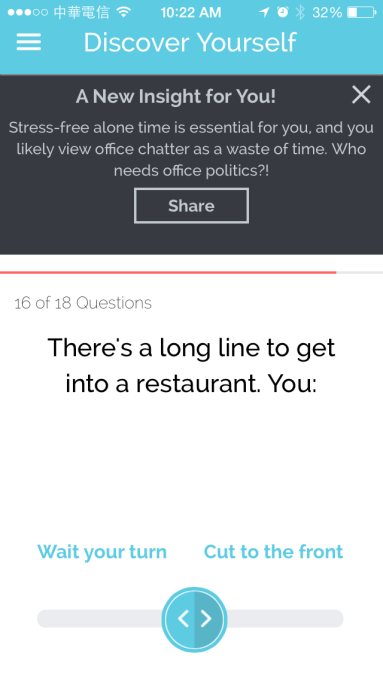 Good.co’s competitors include the MBTI tool, a personality assessment test that is popular among HR professionals, as well as companies like Glassdoor and Knozen, an app for sharing opinions about co-workers. Good.co wants to differentiate by taking a “bottom-up” approach, first focusing on the personality traits of individual employees before figuring out how that impacts their team and, in turn, their company.

To be sure, scores on personality tests can’t always predict how a person will react in a certain situation or among a specific group of people. Good.co is currently working on a set of tools that can be tailored to teams and that can provide insights based on different combinations of personality types among individuals or groups. A subscription-based dashboard geared toward managers is part of the company’s monetization plan, and can potentially be an alternative to assessments by HR consultants that only larger corporations can afford.

“We give users insights based on those permutations about how you can work better in an environment that is very different from yours or even in one that is very similar,” says Birwadker.