Product Hunt on Thursday announced it raised a seed funding round of $1 million and launched its iOS app.

The social network for tech products gained buzz earlier this summer as prominent investors, founders and reporters began to use the website to look out for the next hot startup.

“Product Hunt has some advantages when it comes to fundraising,” Hoover said. “Because investors use it, we don’t have as much of a hard time getting in front of investors.”

When influential members of the tech community first signed up for Product Hunt, Hoover said he sent out personal emails welcoming them to the website. The rest took care of itself.

“If I hand picked them myself, this would be the list,” Hoover said of the investors. “I didn’t reach out to any investors, they reached out to me.”

Originally Product Hunt started out in November simply as a Linky Dink email list among Hoover and his friends interested in tech. Hoover worked with Nathan Bashaw to build a public site that went live a week after Thanksgiving. The website’s growth was slow at first, but Hoover said it began to take off earlier this summer.

Currently Product Hunt has 51,000 active email subscribers, 250,000 unique visitors in the last month and 1.7 million clicks to products. That’s a 70 percent month over month increase in users since January.

And those most active users have been anxiously awaiting Product Hunt’s iOS app that launched today. TechCrunch’s Sarah Perez reported earlier this summer it was expected to be out in August. Hoover said it’s been the site’s most requested feature, especially because some investors consider the site to be somewhat of a news source. 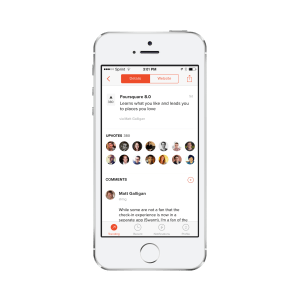 The iOS app features many of the same functions found on the Reddit-like website. Users can see the daily list of trending products, upvote them and comment right from their iPhones. Hoover said they’re currently experimenting with how to use push notifications on the app and connect it with social networks.

With today’s launch, users can likely expect a much smoother mobile experience. The official app designed by David McKinney follows ProducTind, a Tinder for Product Hunt that allowed users to swipe through Product Hunt’s data on their phones. The app had some bugs as it was released before Product Hunt put out its API earlier this week.

Looking ahead, Hoover says the Product Hunt team is excited to see what users come up with following the API release.