BurritoCannon is real, and you can use it. At least for the next few hours. Hella.

After I published my truly revolutionary post yesterday calling for a new burrito-delivery service that I tentatively named BurritoCannon, I trotted over to Postmates’ digs after its CEO Bastian Lehmann asked if I could drop by. Our offices are next door, so I slipped over to say what for.

Instead of merely exchanging hellos, a few Postmates executives sat me down in front of a computer and showed me what they had thrown together: A store built on top of their service called The Burrito Cannon. No shit. (It should be live in San Francisco as of about right now in the Postmates app.)

What the company built was a fusion of the company’s platform and my vision. To cut down on delivery time, the service was constructed to have the delivery person hit up the closest burrito spot, so that they could snag you a burrito and get it over to your desk in a hurry. You couldn’t select a specific restaurant — you could only pick what sort of burrito you wanted.

That was by design, as the store was set up to have your delivery person bring you a burrito from the closest nearby shop, cutting down on the total time required to get you the tortilla tube.

On their end, Postmates instructed the delivery person to charge a set fee — $12 was picked — so that what it costs to have a burrito blasted over to you isn’t a mystery. (To build the service, Postmates used a platform that it has created, but hasn’t released yet. Once live, other businesses will be able to build on top of their delivery network.)

I fired up Postmates on my phone, picked The Burrito Cannon, and ordered a burrito. It worked: 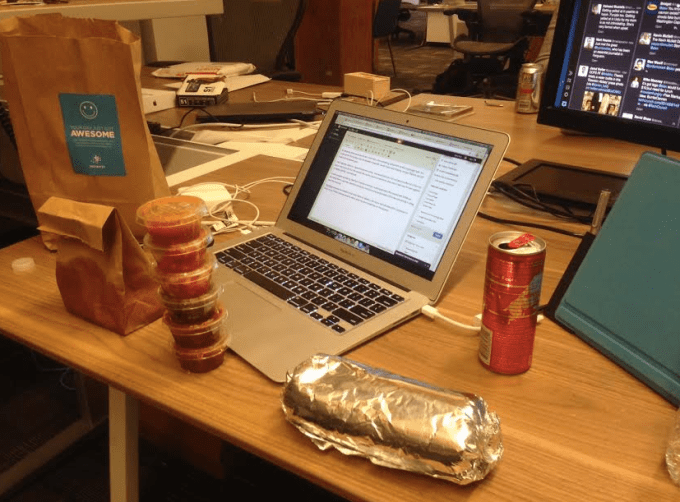 Not knowing where your burrito will come from is an interesting component of what Postmates built. You could call the final product Burrito Roulette, if you will. Caveat: If you hate Chipotle, and get Chipotle, you still have to tip the delivery guy.

I had originally called for a SpoonRocket-like service, that would have cars out and about stuffed full of burritos at your beck and call, but The Burrito Cannon seemed like a pretty decent compromise. And, since it was thrown together incredibly quickly, I am enthused.

In case you were wondering, Peak San Francisco is sitting in a well-appointed office blasted with SOMA sun discussing how to use a startup’s on-demand network to bring you burritos more quickly based off the idea you wrote in a blog post that morning.

The only sad bit at play here is that The Burrito Cannon won’t last long. So, if anyone really does want to build a durable service that brings burritos to us lazy bastards in extra short order, ping me.

And I want a burrito.

Top Image extracted from a GIF created by BurritoJustice. Image is not a GIF as our CMS requires images to be a certain width, and the original GIF did not meet that threshold. I wish it was a GIF. Also: An apology for failing to append this credit in the post. A complete oversight.