Laura Bosworth spends most of her time talking about breasts — nipples, specifically. For the past three years as CEO of TeVido BioDevices, which works with human tissue and 3D printing to create skin and fat grafts, Bosworth has been researching how these products can help breast cancer survivors. For women who survive breast cancer, the damage left behind by lumpectomies or mastectomies can be traumatizing.

That’s where TeVido is poised to step in, Bosworth explained.

The company has been working to develop 3D printing of skin and fat grafts using the recipient’s own fat and skin cells. The company’s first product is a nipple for breast reconstruction, but eventually the company hopes to expand products to include an array of fat grafts for medical and cosmetic use. 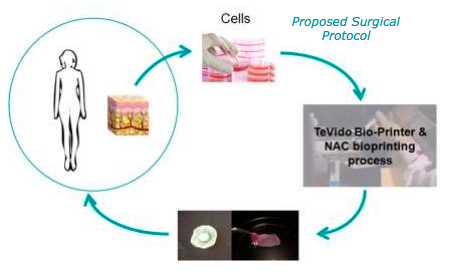 TeVido was recently selected as one of 20 startups to participate in the Martha and Kozo Shimano Entrepreneur Accelerator Program phase of the Livestrong Foundation’s Big C competition. Earlier this year, in May, TeVido was named one of Austin’s hottest startups and in June the company won TechCrunch’s One-Minute Pitch-Off in Austin.

Bosworth got into the nipple 3D printing business in 2010 after retiring from a 20-year career at Dell, and began working with entrepreneurs in Austin, ending up at the University of Texas at El Paso, in her hometown. That’s when she met Dr. Thomas Boland, “the grandfather of bioprinting.” She said his work blew her mind.

“To be honest, I was just astounded. Still gives me goose bumps to think of it,” she said about discovering Boland’s technology.

By 2011 she and Boland had created TeVido Biodevices as a company to further develop the 3D printing technology, and she’s been studying the market for 3D-printed tissues ever since. By her estimate there’s at least a $6 billion industry for the types of products that TeVido will make — and that’s a low figure.

“Every time I talk to plastic surgeons they come up with other uses for our fat grafts. The most recent example was the scar left by chemotherapy ports,” she tells TechCrunch. “Someday, maybe, we’d be able to do a big enough fat graft to where you could do a small breast augmentation. We could custom match breasts, eventually color.”

What TeVido is proposing to do is use a woman’s own fat and skin cells to create the fat grafts and a nipple that will stay in place, stay alive, and not need to be redone over time.

“We start with the nipple because it’s little, but as the technology matures we’ll be able to do larger fat grafts that have a lot of potential,” she said, adding that calf and buttock implants are also a possibility.

In addition to the nipple product, TeVido is working on small fat grafts for women who have had lumpectomies. Breast reconstructive surgery requires multiple steps, and often recreating a woman’s nipple can be the most difficult part. Surgeries have been developed to use skin to recreate the shape of a nipple; there are also implants, and tattoos often add color. Problems associated with these methods include the flattening of the nipple and the fading of the tattoo, and implants also have some drawbacks.

TeVido completed a first round of lab tests on just a $150,000 grant from the National Science Foundation and is hoping to receive another from the National Institutes of Health. In order to move into the second phase of testing, TeVido is seeking more funding.

Once TeVido secures enough funding to begin the next round of lab tests, Bosworth said the team can begin to nail down exactly how close the skin cells need to be, how many fat cells to include in each centimeter of graft, and generally the ideal parameters for the best and most stable product. The final products wouldn’t be in the market for about five years, she says, during which time TeVido would conduct lab tests and clinical trials and await FDA approval.

Although the road to riches for medtech startups can be long, Bosworth said talking to breast cancer survivors gives her more than enough inspiration to keep going.

“It’s risky — but if it works, we can change the quality of life for millions of people,” she says.

Article corrected to note that TeVido has not yet received a second grant.