The birth of the Read Receipt was inconspicuous enough. It started out in our work email, with easy opt-out options, and was meant to slightly increase productivity. Today, the Read Receipt is everywhere, oftentimes as a default, poking its devilish head into all parts of our life, from the mundane to the professional to the very personal.

Though most people will tell you otherwise, the Read Receipt is no longer just an alternative to responding with “k”. This is the excuse that most people will give you when you ask why they have Read Receipts turned on for text messages — that it saves time and energy because they don’t always have to respond. In some cases, that’s absolutely true.

For example, I leave my iMessage Read Receipts on, and my official explanation to people is that it makes it easier for me to receive pitches via SMS. That’s true. Personally, for the way that I do work, Read Receipts come in handy when I get a dozen pitches for coffee or briefings or panels every day. Depending on the context of the conversations, my Read Receipts do one of two things: 1) they say that I have put your (insert request here) on my to-do list, or 2) they say that I have read your pitch and am still uninterested.

Since turning on Read Receipts, I get less chatter and repeat text messages throughout the day, “checking to see if I got this.” There’s a real benefit.

But if I’m being honest with myself (and the rest of you, I guess), there’s more to my Read Receipts than professional convenience and productivity.

I first turned on Read Receipts when I saw that a mentor of mine, someone I truly aspire to be like, had them on. When I asked this person about it, they gave me the same explanation that I gave you above. It seemed like the cool thing to do. The person with Read Receipts on is too busy to respond to all their text messages. That’s not to say that everyone who has their Read Receipts on is trying to come off aloof — some people are legitimately busy and/or cold — but that’s part of the perception.

Long before there were smartphones or text messages, this perception still existed as a fundamental part of the way we play games with each other. This is most true in the beginning stages of romantic relationships, where two people are figuring out where they stand and what they mean to each other, but it can also play out in friendships and other relationships.

Read Receipts, when used, have now become a fundamental part of that process.

“I was dating a guy for a while who would send me some incredibly sexy texts. Like super sexy, and that was kind of a new thing for me,” said Lisa. “It was kind of overwhelming, so rather than read the messages in their entirety and let him know about it through my Read Receipts, I would put the phone on Airplane mode or turn the feature off so I could have my ‘privacy’ per se.”

Just like people say that they have Read Receipts on as a convenience, most people that I spoke with for this story said that they don’t like playing games. Everyone says that. But that’s mostly because we’re using the term “playing games,” instead of being more honest about it: we’re protecting ourselves.

You don’t do a cannonball off of the high dive to start a relationship. You wade slowly into the emotional deep end with someone, slowly peeling back layer after layer. This is why most people try to look their best on a first date, and why first dates aren’t spent farting into the couch during a Survivor marathon. We “play games” as a way of controlling the development of a relationship, so that one person isn’t outpacing the other when it comes to being vulnerable.

We’ve been doing this for centuries, but the SMS Read Receipt is a very powerful new weapon in this game.

So powerful, in fact, that companies like Facebook and other chat services have turned on Read Receipts as a default, forcing us to confront the knowledge that sometimes, people just don’t care about what you have to say. Some folks, those who are perhaps less tech-savvy than your average TechCrunch reader, don’t even know that they might be subjecting people to this. 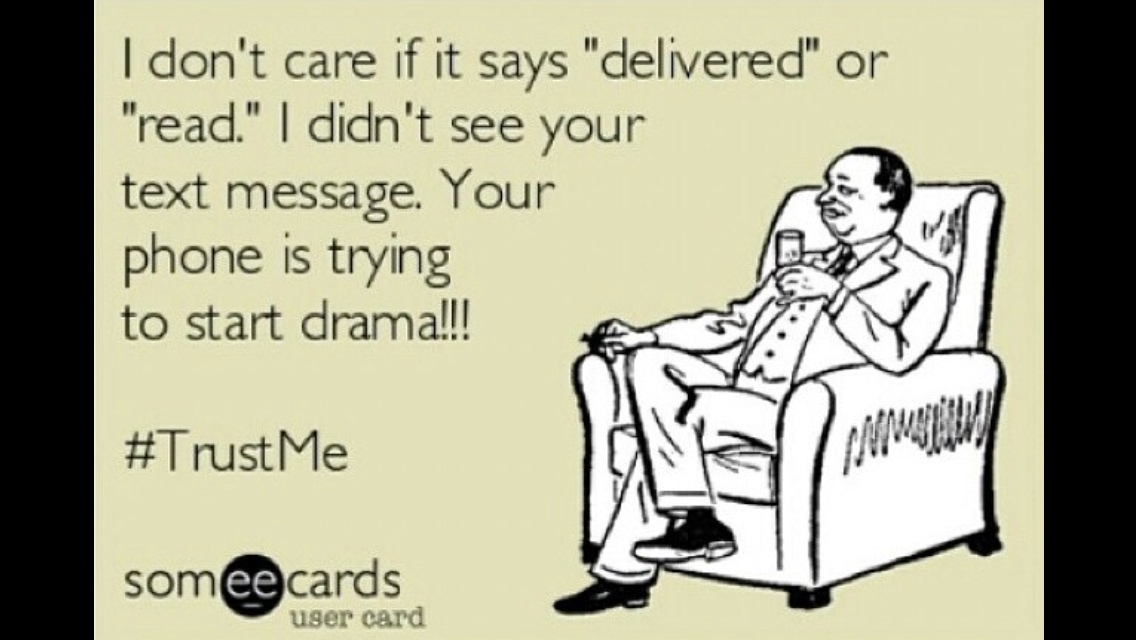 And still there are others, like myself, that choose to use Read Receipts in one of the most personal forms of written communication, text message. That said, I am not always the carefree, confident texter that my Read Receipts might suggest.

Sometimes, if a friend or potential love interest is taking a while to respond, I will read the message and let my phone sit there for a few minutes. And to take it a step further, I’ll purposefully not open the text message if I really want them to think I’m de-prioritizing them, opting instead to read the message through the preview function on the lock screen or in the Notifications Center.

A week ago, I would have been ashamed to admit this here, where I’m sure I’ll be punished in the comments anyways. But I’m not alone.

“This applies to both friends and dudes, but I often read messages on the lock screen on my phone and intentionally don’t open them for a while so they don’t see I’ve read it and not responded,” said my friend Anna. “With friends, it’s just because I don’t want to hurt their feelings or make them think I’m blowing them off. With dudes, sometimes it’s because I’d rather they think I have better things to do than be glued to my phone.”

This is a story I heard over and over during interviews.

“Very, very occasionally, I’ll open a message from a guy and sit on it for a while,” Anna added. “Usually if they’ve just done the same to me.”

I got a call from my mom the other day to tell me that my dad was hurt that I wasn’t responding to his messages. He can see that you’ve read them, she told me. Of course, I don’t want to hurt my dad’s feelings. Whereas my younger sister sees a Read Receipt from me and knows that I probably laughed at her anecdote or internally frowned at her Emoji representation of a hangover, my dad is unaccustomed to the iMessage Read Receipt. I introduced this new, cold kind of meta-communications into his life. And he didn’t like it.

“It’s so annoying to be a college kid with Read Receipts because it becomes a game with friends and your significant other,” said Bradley. “One of my friends was joking that if you wanted to break up a couple, turn one of their Read Receipts on and don’t tell them, because no one immediately reads and replies to all of their SO’s texts. But it sucks to see that they’ve read your joke or your story about your day and then replied an hour later.”

And sometimes the hacking of our own Read Receipts isn’t even about self-preservation, but actually an offensive move. Kim Stolz put it best in her new book “Unfriending My Ex”:

My wife and I don’t fight frequently, but when we have an argument over text, it is much, much more frustrating than in person. Not only do read receipts make us stay glued to our phones, waiting to see when the other has read our most recent jarring jab, but we can also play games with it. I think she would admit doing this as well (if she doesn’t do this, then I’m really backing myself into a corner here) but once in a while, when I’m feeling especially frustrated, I will turn off read receipts on my phone. That way, I can read the midst-of-battle texts (like “Where did you go?” and “Why aren’t you responding?”) without giving her the gratification of knowing that I have read and been affected by them.

Disabling read receipts is just one of many ways you can manipulate someone with your smartphone. It’s terrible. It’s sick! It’s brilliant. It’s not the way I want to be treated, and it’s not the way I want to treat people. But in the heat of a fight, when you’re not quite the most amazing version of yourself, it’s easy to slip into these kinds of evil tactics.

The thing about Read Receipts that puts them on a slightly different level from some of the other games we play is that it is an unusual kind of confirmation. When you screen a call, or don’t respond to a text message (with Read Receipts off), the other person can imagine all kinds of situations in which you might not be able to respond. It hurts, but it’s an indefinite kind of pain with a variety of explanations and excuses that could remedy the situation instantly.

Read Receipts don’t leave much room for a comforting imagination.

So if you’re crossing the Read line, using those little Bastards for productivity or protection or convenience, be aware of the weight they bear. We’ve never had such an effortless way to make people feel ignored, and with an abundance of screens slowly sucking away the empathy we feel for one another, it’s worth remembering that.

#Love is a new column on TechCrunch dealing with digital matters of the heart. It explores our relationships, their relationship with technology, and all the gory details that come with it. Jordan Crook will be leading the charge, and is looking for guest writers to tell their own stories each week. Maybe you found your soul mate on Tinder, or got dumped on Facebook, or have an outrageously interesting sext life. We all have our stories. If you’re interested in contributing, send an email to jordan@beta.techcrunch.com with the subject line #Love for more details.