There’s been quite a bit of interesting financial commentary on Microsoft‘s Surface line of tablet-hybrids published recently. The Surface project loses money. Understanding the magnitude of those deficits is important.

The analysis led to the Verge’s Tom Warren asking the somewhat provocative question of whether Surface is the new Zune, a product line that improved throughout its life, but never achieved escape velocity.

Let’s take a look at the history of Surface, Microsoft’s comments on its vision for the product line, stack those next to its current losses, and then compare the product line to another Microsoft hardware project and see where we end up.

When I first encountered Surface in Redmond back in 2012, I was told along with the rest of the assembled press that the hardware line was ‘a real business.’ That’s to say that it wasn’t a hobby, and that Microsoft expected it to perform financially.

Microsoft reiterated the business line to me in an interview, conducted before the release of the Surface 2 and Surface Pro 2, immediately after I had first held the devices, again in Redmond.

This quote, from Brian Hall of the Surface team is worth meditating on:

Take dropping the price of [the first-generation Surface RT] to $349. That was to primarily get it into more people’s hands. That’s because we knew that the most strategic thing is more Surface users. People that used it loved it and became good advocates. And we had to get that seed planted, watered, and fertilized.

We want to have a great portfolio. We recognize that people start from price points in their head. And I think that they will see that each of these at its price point is an amazing value. If there is someone who wants a tablet that can really be productive.

That was the company’s vision when the Surface Pro 3 was presumably under development, along with whatever the Surface Mini was going to be. The latter, of course, has been shelved.

ComputerWorld did solid work digging into Microsoft’s earnings reports to suss out how much money the company has lost on Surface by comparing revenue statements with cost of revenue numbers when possible, and estimates of cost of revenue when not.

The gist is not pretty: “Microsoft has lost $1.73 billion ($676 million plus $1.049 billion) on the new hardware.” It’s actually worse than that, in my estimation, as ‘cost of revenue’ calculations don’t include certain expenses like advertising, something that Microsoft has spent heavily on for the Surface line.

ComputerWorld’s chart, even if it only takes into account cost of revenue, is worth ruminating on: 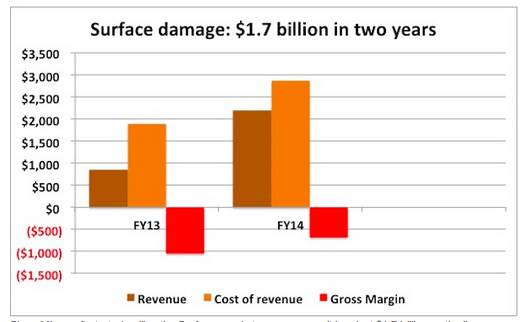 What’s visible is an improving gross margin using cost of revenue as the measuring stick, and a growing influx of revenue.

So, are the losses too staggering for Microsoft? There is a small tension here between Ballmer’s Microsoft, and Satya’s1 Microsoft: Ballmer was willing to plow billions into hardware, as evinced by the Nokia deal and his support of Surface’s early days — Satya just inherited the stuff. I’ve heard some rumbling that Microsoft’s new CEO wasn’t as big a fan of the Nokia acquisition, but I haven’t heard that he was at all inclined to jump off the Surface bandwagon.

I think it’s fair to say that Microsoft’s hardware efforts are not islands, and that the company’s work producing Windows Phone handsets isn’t utterly distinct from its Surface investments. As such, we can view them from something approaching the same perspective.

In both cases, Microsoft is working to build what it considers to be the best hardware for its platform. A platform it’s no longer exclusively tied to anymore, certainly, but still a platform into which it’s willing to pour money to make it succeed.

I don’t think that the Surface line is in much short-term danger of being terminated. A few things are worth considering:

Stepping back the above only gets us to the point of saying that Surface isn’t likely to be cancelled in the short-term. If the product fails to grow its revenue, and shrink its losses, Microsoft could well push it over a cliff in the future. But that’s true for all products.

Therefore if the Surface Pro 3 can move units, Surface should be on decent medium-term footing. Past that everyone is just guessing.

“We are running this as a business. But we also are running it as a long-term business. Which means that there are different priorities at different times.” Returning to that quote after digging through the financial pit of Surface’s first few years of life implies a Microsoft that has a multi-year plan for Surface mapped out. I think it executes that plan, provided that losses don’t again materially diverge from expectations.

That $900 million writedown, in formal financial terminology, was a fucking shitshow. However, it hasn’t happened again, regardless of what impact the death of the Surface Mini had on last quarter’s costs.

We’ll have a new Surface revenue figure in just over two months. It, and the following holiday quarter should give the market, and company a pretty good barometer as to whether Surface Pro 3 was an incremental, or decisive improvement to its predecessors.

1 I am not sure why calling Steve Ballmer ‘Ballmer’ feels correct any more than I am sure why calling Satya Nadella ‘Nadella’ does not. So, Satya it is, but the change in name-location choice is really not my fault. I swear.