There are a lot of dogs on Tinder lately. Like, actual dogs. 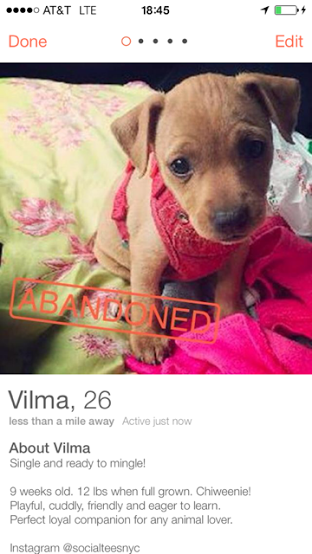 One pup ‘looking for love’

The puppy profiles read just like other potential Tinder matches, but with their ages skewed so the dogs will show up under the filtered searches of those in desired age ranges and genders. Vilma, for instance, is listed as 26 and “Single and ready to mingle!” but her profile notes this pup is only 9 weeks old.

Every year, approximately 7.6 million animals are sent to animal shelters throughout the US, according to the ASPCA. Social Tees and BBH’s The Barn began populating Tinder with 10 puppy profiles two days ago in order to reach the 10 million or so users of the app.

A lot of people have already been posting about the suggested dog matches on Twitter. While most of the tweets seem to understand the project and support it. There are still a few who are left scratching their heads on why Tinder sent them to the dogs:

The initiative has received over 1,500 matches in less than 24 hours and BBH’s Mario Garza says one of the dogs has already found a home.