Tesla just reported its second-quarter financial results, including non-GAAP revenue of $858 million, and non-GAAP earnings per share of $0.11. That non-GAAP revenue figure is up 55 percent from the year-ago period.

The company delivered 7,579 cars in the quarter, and built 8,763. Tesla indicated that it is “on track” to deliver more than 35,000 cars in the year, matching prior guidance.

Analysts had expected that the company would report non-GAAP revenue of $810.61 million, and non-GAAP earnings per share of $0.04.

Using normal accounting metrics, Tesla had revenue of $769 million in the period, and lost $0.50 per share. The company’s Model S leasing program makes determining its revenue less than simple. On a GAAP basis, Tesla lost $62 million in the quarter. Its non-GAAP net income totaled $16 million.

Tesla slipped nearly 2.5 percent in regular trading. The company is up more than 2 percent following its earnings beat.

Earlier today Tesla announced that it has partnered with Panasonic for its Gigafactory, an installation that will build large quantities batteries. The deal will see the two companies collaborate, with Panasonic bringing manufacturing assets and battery components. Investors shrugged at the news.

Following the company reporting its earnings, its shares initially, before recovering. I think that there is quite a bit of confusion regarding the company’s GAAP and non-GAAP figures.

Looking forward, Tesla intends to build 9,000 cars in the third quarter. The company stated in its letter to shareholders that a two-week planned cessation of production during the current quarter brought its potential production down from 11,000 units. The implication is that the company can ramp up delivery of its Model S sedans in the short-term.

Tesla expects to be “marginally” profitable using non-GAAP figures in the third quarter. If you had been hoping for traditional profit from the car company in the near-term, prepare for disappointment. But don’t worry too much. Tesla has around $2.6 billion in cash and equivalents, giving it more than ample runway to fund its own operations.

And now, for everyone’s favorite Tesla chart: The reconciliation of GAAP and non-GAAP financial performance: 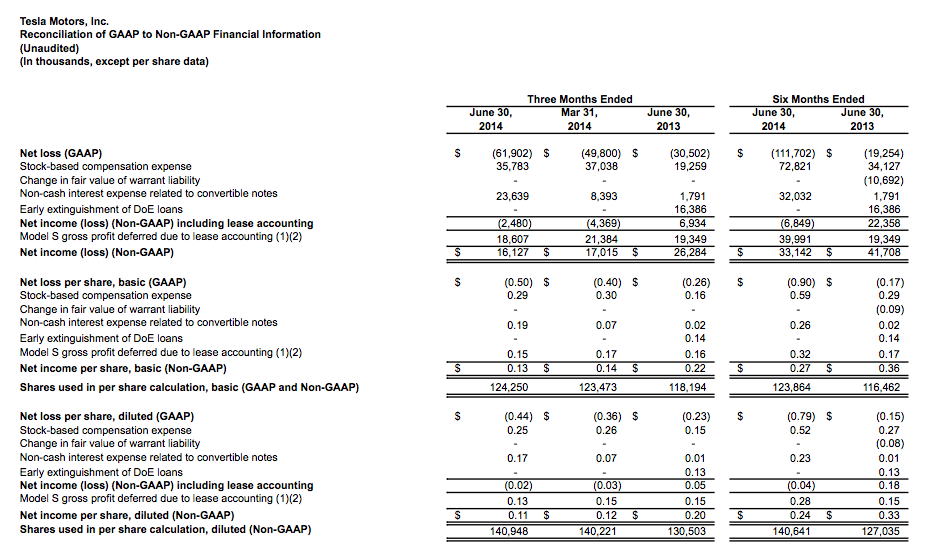 Finally, Tesla expects its delivery rate to reach 100,000 per year on a run-rate basis by the end of the year. That would set the firm up for large revenue growth in 2015. It has to find buyers for all those cars, of course.